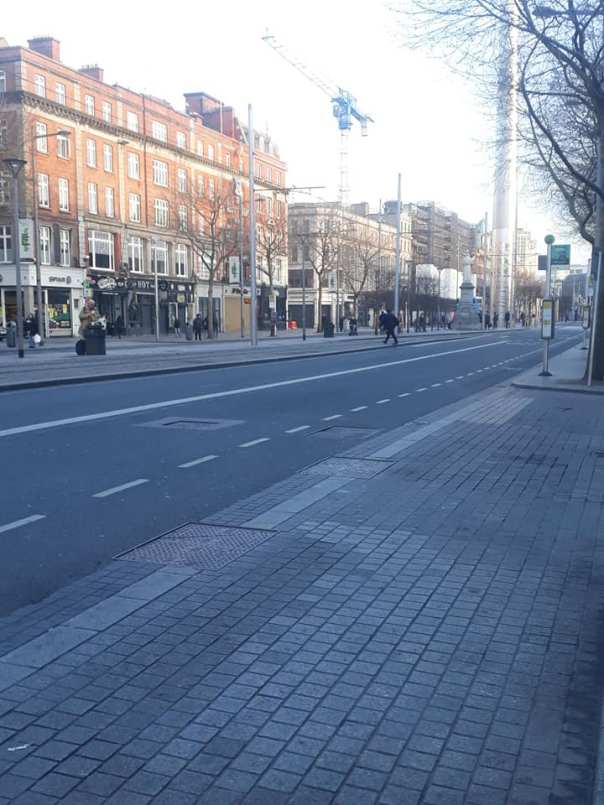 Thursday, March 26th marks two weeks since the announcement that normal life was suspended, in an attempt to ward off the horrific consequences of the Coronavirus pandemic that have been witnessed in northern Italy. Since then, the restrictions have become tighter – now only essential businesses are allowed to remain open (although there is debate over what constitutes an ‘essential business’). Thankfully the supermarket and chemist shop are categorised thus – I do like a face to face encounter.

When you live alone, and you’re suddenly required to work remotely, every day for the foreseeable future, while at the same time physically distancing yourself from other people, then your life narrows dramatically – and quite suddenly. Gone is the theatre, cinema, pub, cafe, meet ups with friends. It’s for the wider good of course, and I am not complaining. It’s nonetheless a bit of a shock to the system

There has been an unexpected upside however – I am now walking more than I have ever done in my life previously. This is partly to get out of the house at least once a day. It is also due to a fear that if a more stringent lockdown comes, then my ability to navigate will become more restricted, so I want to take advanttage of relative freedom while I can. I am staying within walking distance of my house. There’s a quite a selection of routes to take from my tastefully appointed residence in the Docklands.  May I present – in chronological order, my daily excursions to date. 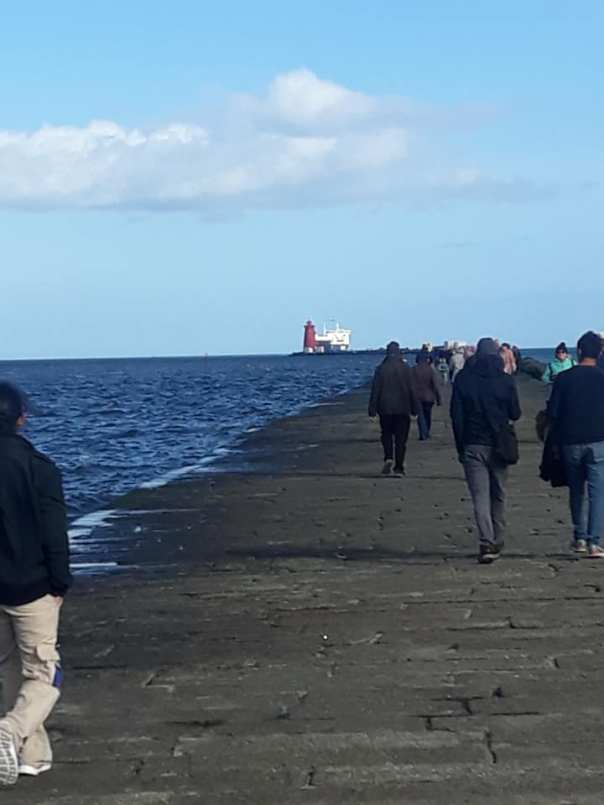 My first journey was a walk to the Poolbeg Lighthouse – a five mile stroll from my house. This was on Sunday 15th March. It worried me slightly because of the sheer volume of people who’d had the same idea as me, and because of the noxious odour of human waste coming from the water treatment plant en route. This is a beautiful walk on a sunny day. I shunned other people – at this point people were still a bit reluctant to physically distance themselves. By the time I arrived home after a ten mile trek, I hobbled into the Rockets on the quays and had a dirty, great cheeseburger – which is now no longer possible, as food establishments are now closed for sit down customers. 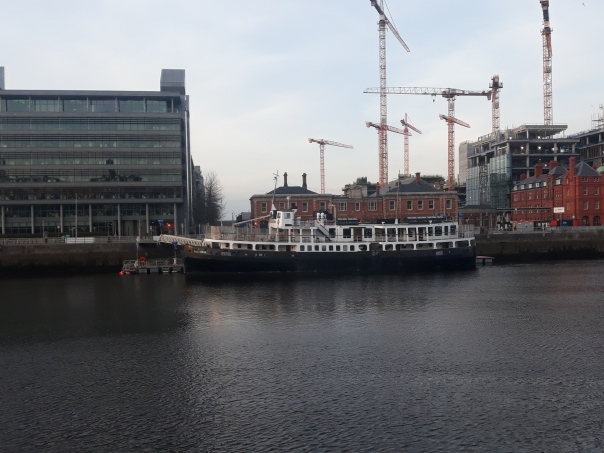 On Monday 16th March I stayed local. At 5pm – the weekday time of all my expeditions, as this when I finish my day’s toil at the laptop –  I walked the length of the Red Line Luas track from my house to the Point, across the river into Ringsend, and over the narrow wooden footbridge where the Grand Canal and the River Dodder meets the sea. I walked along the Grand Canal Docks, and into Fresh supermarket – possibly Ireland’s most overpriced supermarket where a litre of milk costs €1.60, while in Marks and Spencer near my house it only costs €0.85. I did find a carton of outrageously priced eggs, which I snatched up, seeing as by this point acquiring eggs was becoming a challenge.  Back across the Liffey and home. 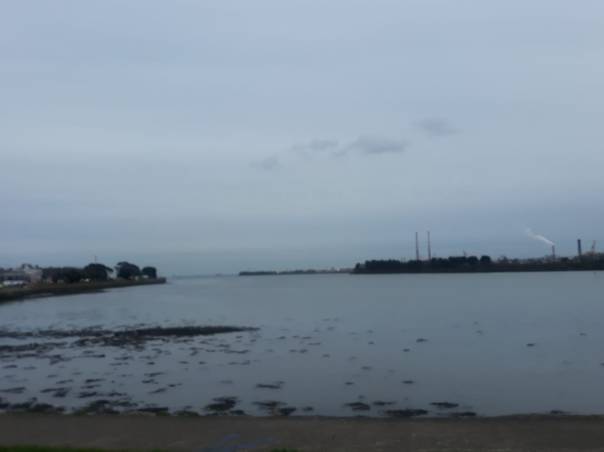 The next adventure was once again local. Having reached the stark conclusion that as I would be cooking every meal for myself for an indefinite period of time, I was going to have to stock up on essential  ingredients. This would require a trip to bigger supermarket than the ones located in the I.F.S.C, . The Lidl on the East Wall Road takes about quarter of an hour to get to, from my house. I took the scenic route however – down past Connolly Station, on to Amiens Street, and the North Strand, through Fairview Park, into Clontarf, take a right onto Alfie Byrne Road and into East Wall. I stayed off the Alfie Byrne Road and took the footpath along the coast, which I had never seen before. Very scenic and like being in deserted place despite being in the city centre. Laden down with recycled shopping bags (including a yellow plastic bag from the Billa supermarket in Kiev, which I have been using since November) I made my way home for a spaghetti bolognese supper. 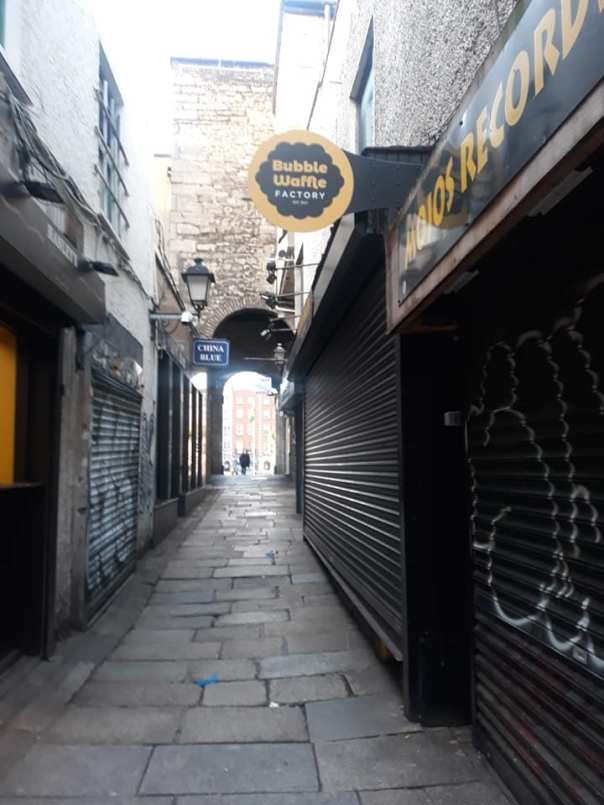 On Thursday I ventured into the seventh circle of hell – also known as Temple Bar. This nightlife area in Dublin is teeming with bars and restaurants and is generally thronged with tourists. However as the government had compulsorily shut all pubs prior to Saint Patricks’s Day on Tuesday (because people were ignoring the distancing guidelines), this evening the place was deserted. It’s a pretty place with narrow lane-ways and cobbled streets. You can see why it is popular with visitors. The only venues opened were the corner shops It is eerily quiet. I made my way over to Dublin Castle whose majestic court yard stood empty – I had never seen it like this before. I made my way home along the north-side quays. 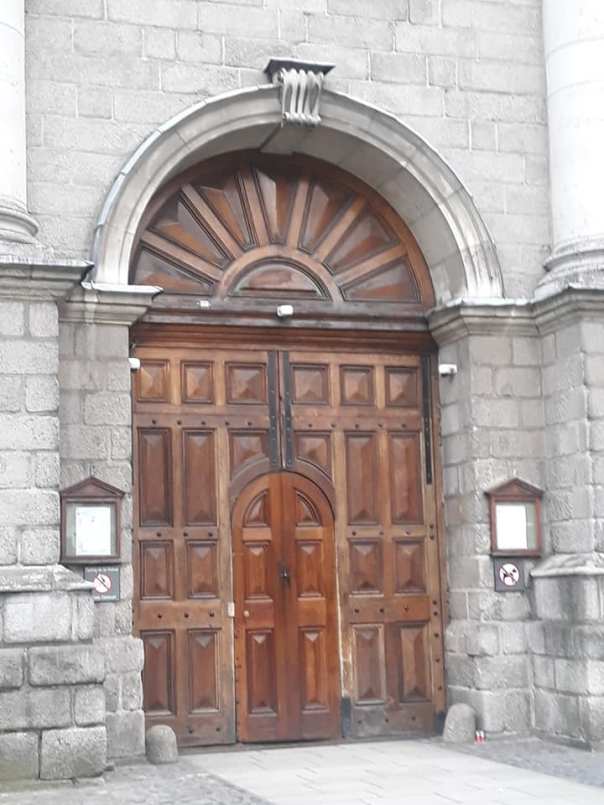 On Friday I crossed the river on the Sean O’Casey pedestrian bridge, walked past Pearse Street Station and up to Merrion Square. The lack of traffic at what was meant to be rush hour was remarkable. I strode through red lights without a care – there was so little traffic on the road. Right at Baggot Street and through Saint Stephen’s Green. Finally I made my way up Grafton Street – the pedestrianised shopping street, whose side streets would normally be packed with with revelers at this time on a Friday evening. Onward to Trinity College where the site of the iconic wooden doorway, shut during the daytime was quite jarring. I went home for a baked haddock supper. 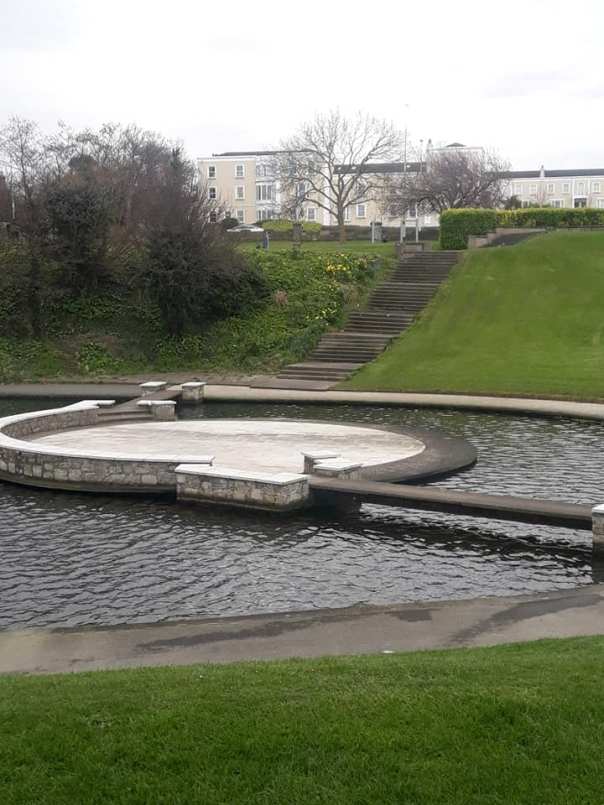 Saturday was a day for wider travels. My weekday sojourns are pleasant but because they only start after 5pm, I am limited to about 90 minutes of daylight. Saturday would be different. My plan was to go to the picturesque seaside village of Dun Laoghaire. Located about eight miles south from my house, I crossed the river, passed through Ringend Park and arrived at Strand Road. There were plenty of people going for a wander on Sandymount Strand. I headed south – through Booterstown; Blackrock; Seapoint; Monkstown until I finally saw my destination – Dun Laoghaire Pier West.  My intentions were noble – I wanted to walk the Pier. Tiredness had overtaken me by this point, so having purchased a chicken fillet roll – with cheese, tomato and onions – in the Spar, I boarded a bus, taking care not to touch any surfaces, while metaphorically hissing at anyone who came too close to me. The suburbs of this stretch of the Dublin coastline can only be described as leafy. There’s money aplenty in these houses. 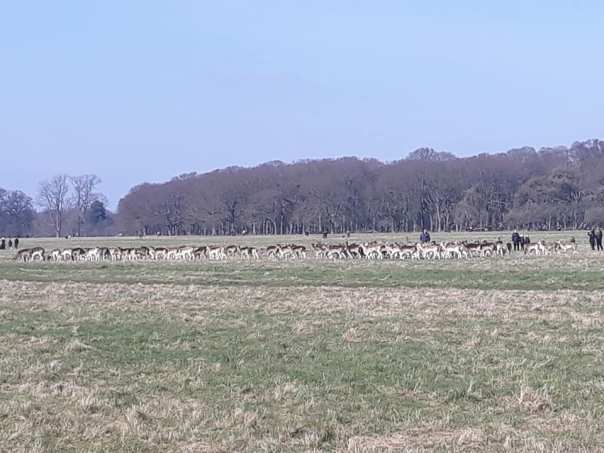 On Sunday a friend and I traveled to the Phoenix Park – the largest walled park in Europe, built by King Charles II in 1662, so he could slaughter deer. The descendants of these deer still roam the park. We walked to the Papal Cross and over to the Furry Glen. Most relaxing.

Monday saw my return to my home office – the table in the corner. At 5pm I gave repeat performance of my trip to Lidl from the previous Wednesday. It’s a healthy 75 minutes – not including the time in the shop. Unlike last week however, Lidl were now enforcing a physical distancing policy, meaning I had to queue to gain entrance. Once inside I was shocked at the gridlock in the breakfast cereal aisle. To my horror I felt something make its presence announced – a diabetic hypoclycaemic episode.  The sweats. The panic. The inability to think clearly. The overwhelming anxiety. The burning hunger. The inability to make a decision on how to deal with it.  Having been in this situation before I knew immediate action was required – lest I end up in a puddle on the floor. I trotted over to the pastry section – dropped a chocolate chip cookie the size of a plate into a bag, and surreptitiously started eating it. I’d pay for it for sure. I’m just not sure whether you’re allowed to consume the produce before payment. Desperate time though.

Tuesday was a repeat performance of the Grand Canal Dock stroll from the previous week. 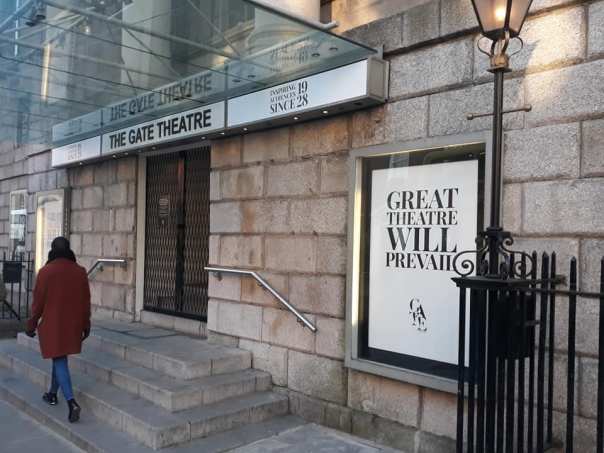 Wednesday 25th March was a new route this time from my house, to Talbot Street; along Ireland’s main street – O’Connell Street – and tben onto Dorset and Bolton Street as far as the abandoned Smithfield Square – normally bustling with men with beards and man-buns; and women with multi-coloured hair and cloth bags proclaiming ‘I am not a plastic bag’. A very spooky experience.

People generally seem quite respectful of physical distancing – it is not always possible on a narrow footpath of course. I have never experienced Dublin like this in such a sustained manner – simultaneously fascinating and unsettling.

This evening my plans are empty. I wonder where my feet will take me..