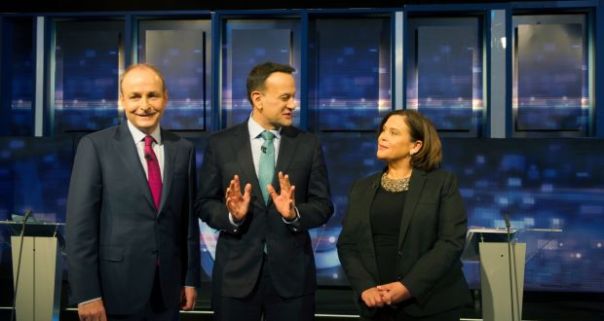 I’ve been watching the hideous charade of Irish political posturing over the past fortnight since the general election. It is enough to make you feel nauseous. Fianna Fail and Fine Gael need to get the finger out and start their coalition talks in public, as the entire country knows that they are negotiating in the background already. These parties’ pretence that this is not happening is a charade, and insults the intelligence of the electorate.

For my Dutch readers I will give a brief summary of the political situation in the homeland. Since foundation of the 26-county Irish Free State in 1922, two parties have dominated Irish politics – Fianna Fail and Fine Gael. The only real difference between them is that they fought on different sides in the civil war of 1922 – one was pro the treaty that divided Ireland and gave the south independence; the other was anti the treaty (preferring full 32 county independence). Since that time these two parties have ruled the country. Both are virtually indistinguishable on economic terms – both being centre right. In the 1982 general election the two parties achieved almost 85% of the popular vote. In the 2007 election (the last election before the economic crash they achieved 69% of the vote. In the general election two weeks ago the combined popular vote of the two parties had sunk to 43%. This haemorrhaging of support for the parties is as a result of Fianna Fail overseeing the economic crash of 2008; and Fine Gael’s brutally harsh austerity regime since 2011. Both parties have become rightfully tarnished from the point of view of the voters as representing corporations; banks and the rich, instead of the wider electorate.

Both claim otherwise, but certain facts are indisputable – Ireland in 2020 has full employment, and the fastest growing economy in Europe. At the same time housing supply is only a trickle, meaning people cannot buy a home; rent is the most expensive in the EU; homelessness is at emergency levels – and includes 4000 homeless children; the trolley crisis in the hospitals worsens each year; childcare and insurance costs are astronomical; public transport – outside Dublin in particular – is a joke. Meanwhile billions are being squandered on contracts to create a national broadband plan and create a national children’s hospital – to preferred contractors. People feel aggrieved. There seems so little accountability. Incompetents like minister for housing Eoghan Murphy and minister for health Simon Harris should have been sacked long ago thanks to their catastrophic failures to perform their jobs satisfactorily. Like stubborn skid marks on white cotton underpants they remained in their positions.

In 2016 for the first time Fine Gael and Fianna Fail support sunk to below 50%. Instead of entering a coalition the parties entered a toxic ‘confidence and supply agreement’ whereby Fianna Fail declared that it would sit on the side-lines and let the Fine Gael party continue a minority government unopposed. These parties were rewarded this year for their abdication of responsibility with a further reduction in support to 43.1%.

This year – for the first time ever – another party Sinn Fein won the popular vote. It received a mere 24.5% – although this is still larger than Fianna Fail’s 22.2% and Fine Gael’s 20.9%. This upsurge in Sinn Fein support has very little to do with Brexit as some people claim – it is specifically related how disillusioned the country is with the Fianna Fail / Fine Gael cartel that has ruled Ireland for so long. This Sinn Fein support may not be lasting but it sends a clear message that the status quo is unacceptable – that drastic changes in how the country is governed is desired.

Fianna Fail and Fine Gael are pale, stale, corrupt and dishonest. While Sinn Fein might not be any better, it has not overseen such abject, sustained failure as the other two parties.

Sinn Fein only has 37 seats though. Fianna Fail and Fine Gael claim that Sinn Fein’s economics don’t add up, while forgetting to mention the €200 billion debt gifted to the country by Fianna Fail / Fine Gael for the bank bailout.

Fianna Fail and Fine Gael’s response to the election is to batten down the hatches – to refuse to even talk to Sinn Fein about a coalition government formation. Even though both were insistent that the DUP talk to Sinn Fein in the North to restore the power-sharing executive there, they insult the entire population of Ireland by refusing to do the same here. Bearing in mind that Sinn Fein is the only party that contests candidates across both jurisdictions on the island this is disrespectful and insulting to huge numbers of people. If neither party will even talk to Sinn Fein then the only alternative is for Fianna Fail and Fine Gael to enter coalition with each other (and try to persuade the Green Party to join them, to bring the parliamentary seat count to over eighty – the majority figure.)

Both Fianna Fail and Fine Gael have always put their parties above their duties they are currently pretending that this will only happen as a ‘last resort’.

It is so offensive and insulting for the two cheeks of the same infected arse to be behaving like this. If this coalition happens then it will become obvious that they are the exact same party and that there is no justifiable reason on earth for both to exist separately.

Yesterday when the 33rd Dail convened Sinn Fein leader Mary Lou McDonald received 45 votes – well short of the 80 required to form a government. For the first time in Irish history however, a leader from a party other than the infected arse of Fianna Fail / Fine Gael received most votes. For the first time in Irish history a woman received most votes in a Dail election for the new Taoiseach. She won’t be Taoiseach. Fianna Fail and Fine Gael won’t allow this to happen.

But in the meantime they carry on as if they are not going to enter coalition. Fine Gael has ‘bravely’ stated that it will enter coaliiton as a ‘last resort’ as if this was not almost inevitable.

Both parties deserve to be wiped out at the next election – which hopefully will be this year if the Green Party refuse to commit political suicide by propping them up. Their current behaviour indicates that they will be.