It was 10pm on Saturday night. I was festering on my sofa at home in Dublin, planning what to do for the remainder of the bank holiday weekend. A brainwave struck. I would take an early train to Belfast on Sunday morning; book an overnight stay at some flop house and travel back late on Monday evening. To confirm my intent I booked my train ticket and paid for an overnight stay. I also booked a day trip for Monday to see the Giant’s Causeway.

Check-in to my accommodation was not until 3pm on Sunday. I arrived at midday. I had packed very slightly – with my spare socks; t-shirt and smalls, stuffed into my stylish man-bag – so I decided I might as well take a walk down to the harbour and visit the Titanic Quarter which is home to Titanic Belfast – the world’s largest Titanic visitor attraction. On the way I stopped into the St. George’s Market – a covered Victorian market, that on Sundays serves food. I had a plate of paella for my lunch.

The Titanic Quarter is in the old Harland and Wolff shipyard – the place where the world’s most famous ship was built. The waterfront where it is located has been regenerated, and this is Belfast’s most popular tourist destination. I called in to see the SS Nomadic on the way in – this ship is a former tender (a boat used to service larger ships – by bringing passengers out to board the larger ship for example) for the White Star Line, the owners of the Titanic. It was used to bring passengers on board the Titanic at Cherbourg. It was a reasonably interesting place – but rather over-emphasised its tenuous connection to the bigger ship. More interesting was how it was used as a nightclub in Paris later in the 20th century and how it finally came home to retire in its birthplace in Belfast. 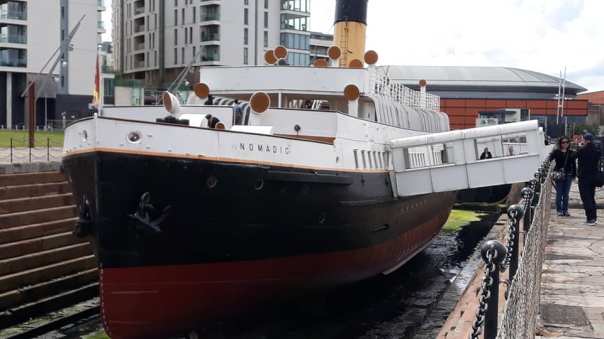 I went over to the six story Titanic Belfast building. To my alarm it was absolutely jointed with people. This is hardly surprising – the tale of this tragic ship is still fascinating to the world, a century after it sank. The focus of the exhibition is more on the history of the shipyard and its place in Belfast history. It was very interesting. The crowds were problematic however. It runs smoothly and professionally – I just can’t tolerate crowds like these.

I wandered towards my housing for the night, to check in. My phone wasn’t working so I worked from the memory of the map I had viewed while on the train. I walked through the pedestrian shopping district. I could have been anywhere in the world – globalisation has made shopping a very generic activity – the same stores can be seen in any city of any stature. My bed for the night was in John Bell House in the university district. It was a student room that doubles as cheap tourist accommodation during the summer. I guess the set up could be described as co-living – six identical en-suite rooms with shared kitchen facilities.

As my bus to the Causeway was a 8.45 the next morning I decided to locate the pick-up spot. I made my way to the address. It was a derelict building. This was a bit worrying. I spotted a rainbow flag a few doors down so repaired to the Maverick Bar for a drink while I figured out what to do. As I was supping my pint I realised my mistake. I was being picked up on Donegall Road. I was sitting in Donegall Street. Crisis averted.

While staring at my map I saw that my room was about a five minute walk from the Falls Road and a ten minute walk from the Shankhill Road. These two roads are synonymous with the Republican and Loyalist communities in Belfast. During the Troubles you used to hear Anne Doyle speak of these streets regularly on the evening news. I was curious. The republican murals along the Falls Road were colourful and very left-wing in outlook. I happily took pictures of many of them. I made my way back, and took a stroll up the Shankhill Road. This felt more sinister. This was the birthplace of the loyalist paramilitary groups the UVF and the UDA in the 1960s. Maybe it was because it was getting dark but I got a little freaked out when I saw that I was being watched taking pictures of the murals in a housing estate by a hatchet faced woman, smoking a fag beneath the Union Jack above her front door. I had my excuses ready if required – I was Joost Petersen, tourist from Amsterdam – in case anyone asked. I scurried back towards town. My adventures over for the day. 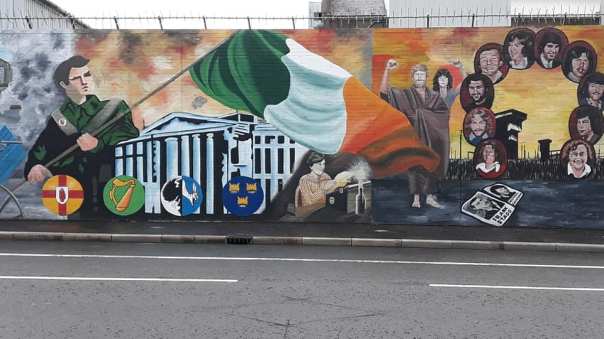 I boarded the bus on Monday morning. Destination was the Giant’s Causeway, stopping at various places on the way. The driver was cheerful and knowledgeable. Our first stop was Carrick Fergus Castle. The driver proudly pointed out the statue of King William of Orange which had been unveiled to commemorate ‘his great victory in the Battle of the Boyne in 1690’. I gulped. It was going to be like that today, was it? I showed the statue my middle digit when the driver had his back turned. On we went.

Out next stop was the Carrick-a-Rede Rope Bridge. This is a famous rope bridge near Ballintoy in County Antrim. It links the mainland to the island of Carrickarede. It spans 20 metres and is 30 metres above the rocks below. The bridge is owned and maintained by the National Trust. Our driver told us that it was perfectly safe and secure. He was telling the truth. The sheer terror I felt though as the flimsy bridge swayed when I glanced down towards the deadly rocks below, while halfway across was enormous. I had to cross the bridge again to get back to mainland. I did not repeat my mistake of looking down this time.

After a brief stop at the Bushmills distillery (the world’s oldest – dating from 1608) we arrived at the Giant’s Causeway. The Giant’s Causeway is an area of about 40,000 interlocking basalt columns, the result of an ancient volcanic fissure eruption. It is located about three miles from Bushmills. It was declared a World Heritage Site by UNESCO in 1986. Most of the columns are hexagonal, although there are also some with four, five, seven or eight sides.

Legend has it that Fionn McCool – hero of ancient, Irish mythology – built a pathway in the sea towards Scotland – The Giant’s Causeway. Fionn is told that the giant Benandonner is coming to fight him. Knowing he cannot withstand the colossal Benandonner, Fionn asks his wife Oona to help him. She dresses Fionn as a baby, and he hides in a cradle. When Benandonner arrives, Oona tells him Fionn is out but will be back shortly. Benandonner is so awed by the size of the baby and scared of the prospect of meeting his father he runs back towards Scotland across the Causeway smashing the causeway so Fionn couldn’t follow him. It is a very beautiful place – very stark and atmospheric.

I boarded my train back to Dublin on time, and enjoyed the conversation between the two Newry women as they were returning from their day out in Belfast. Nuala’s description of Dublin was funny – ‘really expensive and nothing to see’. I don’t agree.

Plenty to see up north though. A very pleasant weekend excursion.