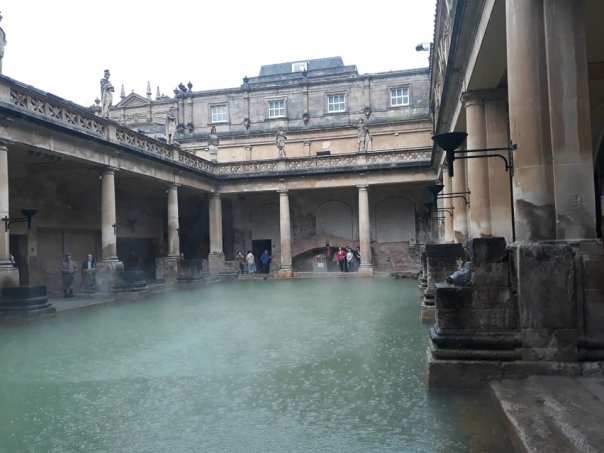 When I was invited to go to Bath I was excited. I had heard about this place – the reviews were positive. My knowledge of the city on the other hand was scant. I knew that it was built on hot springs and that the EU (otherwise known as the Roman Empire) had invaded and had built Roman baths there which lasted for centuries, until the Celts decided to ‘take back control’ and that ‘Brexit meant Brexit’ and kicked them out when the EU collapsed in the 5th century. That was it really. The links to Jane Austen (she lived there for four years between 1801 and 1804) and its proximity to Stonehenge were news to me. My sojourns to England tend to be to London or Brighton. This would be my first excursion to this part of the country. My travel companions were to be the members of a writing group that I am peripherally involved with. I have been to one of their meetings, but I’m friends with a regular attendee, so I decided to go. I wouldn’t encroach on their plans and would do my own thing, while availing of their company in the evening. It would be a more social style of travelling.

I arrived into Bristol Airport at 8.45pm, the landlady of the B&B’s warning ringing in my ears not to arrive later than 10.30pm. I had informed her that I would not be able to check in until after 10pm as it would take me an hour to get to Bath on the bus. I swaggered on to said bus at 9pm and proffered my bank card to the driver.

‘A return ticket please’ I asked.

‘Cash only’ was the reply.

‘Where is the bank machine?’

‘Inside the airport door.’

I rushed back inside and withdrew cash. Out of the corner of my eye I could see the bus departing. Complaining about this later, I told my friend that in Ireland the driver would have waited.

My friend agreed, but told me that the English driver would have waited also, but only if I had asked him to, whereas in Germany the driver would not wait beyond the allotted second even if asked. A useful lesson in cultural differences between the various nations of the Roman Empire.

My B&B was a place with lots of crinoline and lace on display in my room. Never mind – I’d only be sleeping there – the fussiness was irrelevant. 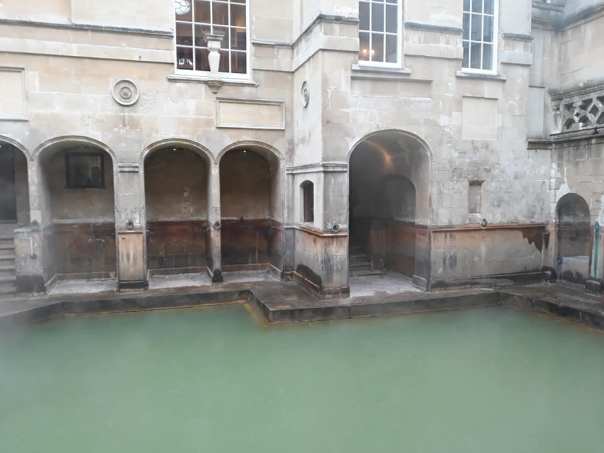 The next morning I rose early and walked in to see the Roman Baths in town. The baths were built shortly after the Romans invaded in 43AD and became an important social and political establishment. One of the few hot springs in Britain, Bath quickly transformed into a destination for people all over the empire. After the decline of the Roman Empire the baths fell into dereliction until the Georgian era, where once again polite society started coming to Bath to ‘take the waters’. It is a fascinating museum, capturing the atmosphere of those ancient times. They’d want to be – it cost twenty quid for entry. In 2018, there were over a million visitors. The paper cup of lukewarm, pungent bath water in return does not justify the exorbitant price. The Baths themselves are certainly impressive though.

After a few hours I departed and headed over to Bath Abbey – a glorious building close to the Baths that was spared King Henry VIII’s rampages during the schism from the Catholic church in the 16th century. It’s a fantastically ornate structure.

After, I took a walk up Gay Street. My destination was the Assembly Rooms – the meeting place for the cream of society during the Regency period. To get to it, I passed through the Circus. The Circus is a historic street of large townhouses forming a circle with three entrances. Designed by the prominent architect John Wood, the Elder, is regarded as a notable example of Georgian architecture.. It has been designated as a Grade I listed building, meaning that no changes to the outside appearance is allowed. Grade 2 listed film star Nicolas Cage used to live there. The entire city of Bath is in fact a world heritage site thanks to the historic significance of its architecture.

The Assembly Rooms are grand and noble as one would expect. After I strolled the short distance to the Royal Crescent – a row of 30 terraced houses laid out in a sweeping crescent which was designed by John Wood, the Younger – it is among the greatest examples of Georgian architecture to be found in the United Kingdom. John Cleese used to live there. 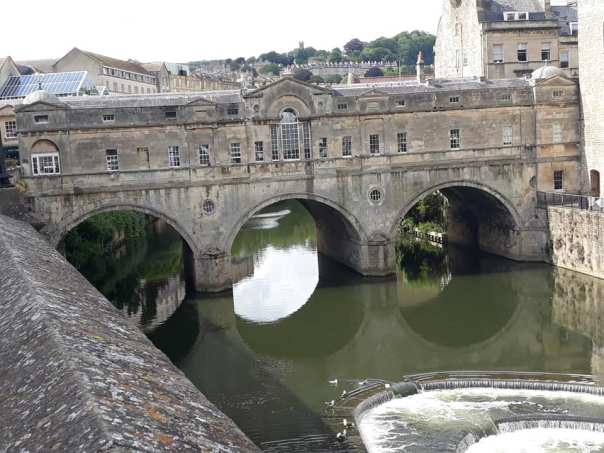 I met my friend and as the pelting rain had stopped, we took a stroll through the Parade Gardens beside the Avon River (one of five by that name in Britain) – bypassing the two pound entrance fee to the park as the kiosk where we were meant to pay was empty. The view of the Pulteney Bridge beside the weir over the river was beautiful. The bridge is exceptional for the fact that it has shops built across its full span on both sides. We spotted a beer garden on the riverbank called the Boater. Our day of culture finished and we ate, drank and were merry.

The next morning we gathered at the entrance to the Baths for the Mayors’ Guide free walking tour of the city. Lasting two hours our fantastic guide gave us an amazing insight to the history of the city – from the invention of the Sally Lunn Bath bun, to details about the Abbey, to a walk up Milsom Street – the preeminent shopping street from Jane Austen’s time to this day; to Beau Nash, the man who made Bath so popular among high society; to how the size of the city meant that all classes mixed; to the Sedan-chair – the preferred mode of transport for the rich during the Georgian era, whereby vagabond Irish people would carry rich people in an enclosed chair about the city. Most of the city I had seen the previous day but the tour oriented me in the place, and gave a glimpse into city life that I would not otherwise have seen. After lunch I paid a visit to the Victoria Art Gallery, and up Great Pulteney Street (where Austen used the live) and on to the Pleasure Gardens behind the Holburne Museum. A leisurely stroll along the Kennet-Avon Canal, then back into town for an elderflower cosmopolitan cocktail at Opa’s cocktail bar, followed by Gupal lamb at the Bengal Brasserie on Milsom Street.

On Sunday I was taking a trip. Picked up at 8.20, the minibus took us to Stonehenge, where in addition to the guided tour price of £40, entrance just to see the rocks was £20. This felt like a real racket on the part of the National Trust. A score to see some stones is absolute extortion. I was not consumed by the prehistoric mysticism of the site thanks to the entry fee. It is a mystery though why a prehistoric people who lived at the end of the Stone Age would spend time building such an enormous monument. It’s an impressive feat. We proceed to Avebury – an even older rock formation built about 5000 years ago, but only discovered in the 20th century. Afterwards  a walking tour of the villages of Locock and Castle Combe – villages that are working villages where people live, in which no new house has been built since the 18th century. Very picturesque. I also enjoyed faggots (meatballs made from pig’s offal) and chips for my lunch – as a nod to the fact that I was visiting Ye Olde Englande.

I arrived back to Bath, at 5.30pm just in time to get my airport shuttle to Bristol.

As Britain is poised to leave the Roman Empire at the end of this year, I am hoping that there won’t be a repeat of when she left the EU in the 5th century. Brexit in the 5th century gave way to the Dark Ages…

2 thoughts on “Having a Bath”