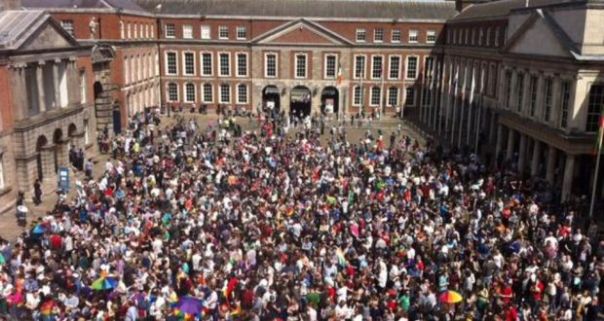 ‘Aren’t you in Limerick though?’

Actually I wasn’t. While it is certainly true that I had been contemplating a trip home on Friday to cast a 2nd vote in the abortion referendum, I had ultimately decided that I would not do this. My respect for democracy and terror of ending up in the slammer for the crime of voting twice was too great. I had transferred my voting registration from Limerick to Dublin when I move back to Ireland after fifteen years in the Netherlands. Yet somehow a voting card had been sent to both places.

I was certain that I would get away with it, were I to attempt this crime. In my defence I could argue that I thought I was special and as such deserved to vote twice. I had a stern talk to myself however and reminded myself that I, as an individual was not going to change the result, even by double voting. My big fat Dublin Yes would have to suffice.

‘So, do you want to go to Dublin Castle?’

I didn’t need to be asked twice. In 2015 when I Ireland voted to equalise marriage laws by including same sex couples, I had seen the celebrations from the grounds of Dublin Castle on that incredible day. They looked so joyous. I didn’t expect the atmosphere today to be quite as raucous. The topic was so much more sombre – women’s health and the toxic legacy of the 8th Amendment to the Irish constitution which banned abortion in all circumstances – including when the pregnancy was a result of rape and incest. I imagined that the atmosphere would be one more of relief.

Well I was wrong. It was exhilarating. People were so happy. The sea of YES t-shirts; the cheers of happiness. The warm sun shining on our faces.

I even found myself cheering for the government when like snake-oil salesmen in cheap suits, they oozed onto the stage to claim credit. Leo Varadlar; Simon Harris; Eoghan Murphy; Katharine Zappone; Regina Doherty.

Sinn Fein leaders Mary Lou McDonald and Michelle O’Neill also received a rousing reception – particularly as they raised a handwritten placard given to them from the crowd which read ‘The North Is Next’.

Micheal Martin of Fianna Fail party looked lonely on the stage. It can’t be easy to have supported the amendment when most of his party opposed it. It’s worth noting that the majority of Fianna Fail party TDs opposed women’s rights. The only age group who opposed the removal of the 8th was those people aged 65 and over. Join the dots.

The biggest cheers came for the campaigners who have lead the campaign to remove the amendment – Ailbhe Smith and Peter Boylan in particular.

The sole ‘Vote NO’ campaigner in her bright red ‘Vote NO’ jacket looked slightly bewildered.

The man handing out ‘Vote No’ stickers initially caused a few raised eyebrows. Until we realised that he was handing out stickers from the 1983 campaign, when the good guys were the No side.

At about 6pm the heavens opened. Well of course they did. It wouldn’t be an Irish gathering without a downpour.

A voice came over the loudspeaker. The result. From a vote of 2.1 million people, it was announced that 1.4 million had voted YES. The cheer erupted like a volcano, drowning out the rest of the declaration.

We left to the sound of the crowd shouting ‘Savita, Savita’.

A special and triumphant day.