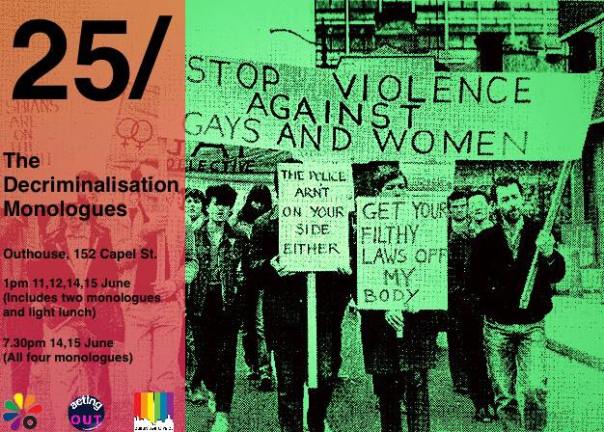 June 2018 marks the quarter century anniversary of the decriminalisation of homosexuality in the Republic of Ireland . To mark this event Acting Out Theatre in conjunction with Outhouse (the Dublin LGBT community and resource centre) and Dublin Pride have commissioned a series of monologues inspired by this momentous occasion. The show is called ‘The Decriminalisation Monologues’. One of the writers approached to write a piece was my good self. If someone asks me how I managed to get such an illustrious gig, I peer over my lorgnettes, give a knowing, throaty chuckle, and hoarsely whisper ‘I was commissioned. Darling.’

Actually that’s not true. I don’t possess lorgnettes. It was very flattering to be asked. I readily accepted.

What to write though. I was a mere slip of a lad in 1993. A teenager. What did I know about the decades old struggle for gay rights? It could have been captured on the back of a stamp. I had no idea about the court cases taken by David Norris against the Irish state. I had never heard of the murder of Declan Flynn in Fairview Park, and how this had created the spark that led to the Irish Gay Pride movement. I didn’t even fully grasp that Ireland was still living under a catholic dictatorship, that was only beginning to loosen its vice like grip from the throat of the nation.

It would take several more years for Ireland to reach maturity when it came to social issues – contraception freely available for the first time in 1993; divorce legalised in 1996; realisation that the catholic church was an international human trafficking ring over a series of scandals in the coming years; same sex marriage legalised in 2015; abortion finally legalised last weekend – May 25th 2018. The decriminalisation of homosexuality – as a result of a European court case taken by David Norris against the state – was an early harbinger of things to come.

I had no idea though. I was cowering in the closet – and determined to remain that way for the rest of my life.

So when asked to write apiece around the theme of  decriminalisation, I viewed the subject through the prism of the fear and shame I was experiencing myself at the time. I remember that I was working on a campsite in France during the summer break from college, and reading about the news in a three day old copy of the Irish Times – these were pre-internet days – and feeling nothing. This meant nothing to me.

Only quarter of a century later could I look back on those scary, lonely times and see how important it actually was. I wanted to recapture that feeling from the point of view of someone who was reaching adulthood at the same time as the country was maturing. And I wanted to record the experience for a person from outside Dublin – Limerick – where the silence was being splintered at a lower volume than what must have been heard in the capital.

I wrote a monologue called ‘The Number’.

It was an easy piece to write in terms of getting it on to paper. The memories are vivid. What was more difficult was how raw it felt – how vulnerable I was at the time. Initially I thought I could perform it myself – being a bit of a show pony I crave the spotlight. Upon completion however I was glad to hand it over to Acting Out. Let a neutral pair of eyes interpret it. I would have been a blubbering wreck if I had to take direction on this story; being as it is, a fictionalised account of my own experience – names, date, times and places altered or adjusted to protect the guilty.

You can see a my piece ‘The Number’ alongside ‘The Special Friend’ by Sean Denyer  at 1pm on June 11 and 12th in Outhouse at 105 Capel Street. Tickets are €12, and include lunch.

‘Out of the Shadows’ (by Colette Cullen) and ‘I Know What You Are’ (by Sean Denyer) will be performed at 1pm on June 14th and 15th – also including lunch.

You can buy tickets at the link.