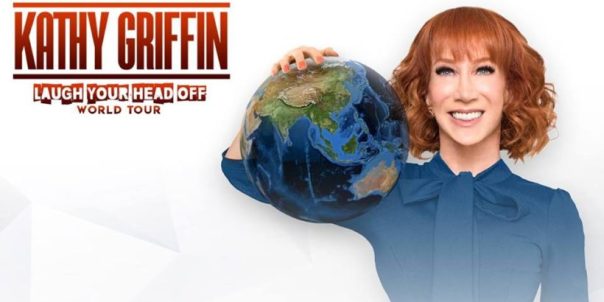 Last night I saw Kathy Griffin performing her stand-up show ‘Laugh your head off’ at Vicar Street in Dublin.

She’s probably better known in the US than over here.  I have been a fan for years.

I first noticed her as Brooke Shields’ sassy sidekick in the mediocre sitcom ‘Suddenly Susan’ in the 1990s. When the show ended she started a reality series called ‘My life on the D-List’ which chronicled her life, stand-up comedy career, television gigs and her existence as a micro-celebrity in the insane world of Los Angeles. It ran for six years. Youtube is my friend, and is where I watched every single episode.

Her act involved skewering the ridiculousness of the celebrity culture prevalent in Hollywood, and her run-ins with the various stars, from her vantage point, way further down the pecking order. It was Joan Rivers in style – conversational, catty, observational.

It was a good career, whose bedrock was her stand-up comedy act. She toured constantly – sensibly thinking that her comedy gigs weren’t dependent on being flavour of the month. The television gigs and books were lucrative side deals, which kept her in the media spotlight and allowed her to pay cash for a new $15,000,000 home in Los Angeles next door to Kim Kardashian and Kanye West.

Earlier this year she did a photo shoot. In it she held aloft a Halloween mask of Donald Trump’s head covered in ketchup.

The response was lunatic. Donald Trump’s rabid fan-base descended, issuing death threats against her, and reacting in a typically American, over the top manner.

She was ‘disrespecting’ the office of president.

Almost as if the orange freak himself wasn’t disrespecting the office by cheating in the election, and by being a racist, abuser of women.

They declared that she was promoting ISIS, by involvement with pictures like these. It was a Halloween mask covered in ketchup – certainly no worse than the ‘shoot Hillary’ computer game promoted by the orange freak?

They were mortally offended by this image.

Strangely their offence didn’t extend to the fact that life is incredibly cheap in the USA, and where violent rapists are constitutionally protected to buy weapons of mass destruction – who then proceed to randomly slaughter people in churches and nightclubs and nursery schools.

With pressure from the Orange Freak, the secret service decided to investigate her for ‘conspiracy to assassinate the president’. So now she is on the Interpol list, meaning she is stopped and questioned every time she is in an airport.

Her US tour was cancelled. Her TV gigs dried up, and her so-called Hollywood friends almost universally abandoned her (although Cher didn’t – because Cher is wonderful).

So like any showbiz trouper, she gathered her bags and went on the road – outside of the US this time. To places where the audience have a healthier scepticism about America’s ability to only do good in the world.

Ireland was the first stop on the European leg of the tour. She was stopped at Dublin airport of course – she is on an Interpol list after all.

Her show was sensational. Fast, furious, biting, angry, hilarious. Her life sounds horribly stressful since that picture. It must be wretched to be a personal target of the most powerful man in the world, when said man is so vicious, petty, stupid and vindictive. And orange.

It was also quite sad, how her erstwhile friends could abandon her so quickly. Anderson Cooper – the heiress who thinks he’s a journalist – was the worst. In a manner that is typical of a spoiled rich kid, he stayed in the closet until the bitter end. He turned on her too. Well of course he did. He never had any integrity as a human being.

To say that she is angry would be an understatement. She is livid. But remains incredibly funny, in her delivery of stories from her bizarre life. From her alcoholic 97 year old Irish mother from Drogheda, to teaching Cher how to tweet, to the interview with the secret police, to being on the Neighbourhood Watch Committee with Kim Kardashian, to being the target of the most deplorable segment of American society.

The only part of the show that fell flat was when she foolishly said ‘You guys in the UK really get me’. That received a loud boo. This is of course the prime example of a statement not to make to an Irish audience. Realising her mistake (but I don’t think she understood what it was) she quickly recovered, and proceeded to slay with her magnificent vileness.

But she looks so frail – tiny in stature at only five foot three, her hair only just growing back after she shaved it in solidarity with her sister who died of cancer earlier this year. I couldn’t help thinking that she urgently needs to sit down, and to eat several deep-pan, double crust, triple cheese, ham and mushroom pizzas.

As she was launching into her final tale of the evening – a story about her encounter on New Year’s Eve with the ridiculousness that is Mariah Carey – she suddenly slurred her words. Calling offstage ‘Randy, I’m going down,’ her boyfriend ran out and carried her off.

About ten minutes passed. The lights remained down, so we knew the show was not over. She hobbled back out, assisted by the lovely Randy, and told us that we were great, but that she couldn’t continue.

Feeling quite relieved that she was still standing, and appreciative of the fantastic, over two hour show we had just watched, we gave her a massive standing ovation.

Kathy Griffin is an Original Gangster.