Back in July I took a coastal cliff walk between the village of Bray and Greystones in County Wicklow. It was the height of the summer, the sun was shining, it was a beautiful day to stretch the legs. Six months later it was time for a repeat performance. This afternoon I did the same route, but this time in reverse. I was going to walk from Greystones to Bray. So, that’s what I did.

Greystones is the last stop on the DART. It’s a coastal village situated seven kilometres from Bray. The plan was to take the train there, walk along the cliffpath to Bray and then hop on the train home. As it’s the dead of winter, and not wanting to be waking on a cliff edge in the dark I set off at midday. I met my friend at Connolly Station and off we went.

It’s a picturesque village with beautiful, colonial sea-facing houses – like most of the coastal villages on the eastern sea board – Bray, Dun Laoghaire, Howth. Should I ever win the lottery – highly unlikely as this may be, largely because I never play the lottery – I would buy one of these houses. Owning such a house would represent the pinnacle of financial success. 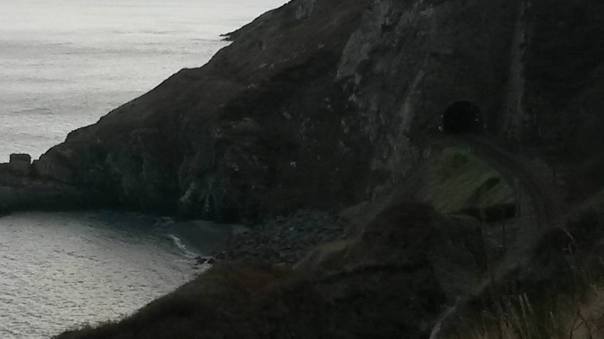 We decided to do the Greystones to Bray walk as the outskirts of Greystones is boring flatland and construction works. The real beauty is on the approach to Bray where the cliff is located, along with the train line that runs through the mountain.

Most people seemed to be traveling in the opposite direction to us. I felt just a touch smug – unlike them, we were leaving the scenery till last.

The etiquette of the walk is that once you have passed through the crowds at the beginning of the trek that you acknowledge fellow walkers passing with a curt nod of the head. There’s no need to say hello. The gruff nod will suffice. I practised on a few passers-by who looked at me like I was a bit deranged. I was only being polite, and observing the unwritten rules.

The incline is not that steep – this walk is a lot gentler than the Howth Head cliff walk which I did on New Year’s Day.  Although my nerves on that day were possibly more frayed thanks to the gale force winds and the proximity of the crumbling footpath to the cliff face. Thanks to climate change today was a balmy eleven degrees. I had to remove a jumper because of the heat.

It was good to see the crowds of people out for their Sunday hike with their dogs.

It took us ninety minutes, traveling at a reasonably brisk pace – taking in the sea views and rock formations on the cliff.

Upon arrival in Bray we decided that chips were essential. A colleague had recommended Henry and Rose’s chipper close to the station. We repaired there. It was everything a takeaway should be. Shabby and greasy looking on the outside. A décor that seemed to be advertising the shop’s wares as gastroenteritis in a bag. Of course, the food does not match the outside appearance. Those chips were heaven in a bag – chunky, crispy with a generous sprinkling of salt and vinegar.

We ate them on the boardwalk by the beach. With a side order of onion rings. Just what the doctor ordered.