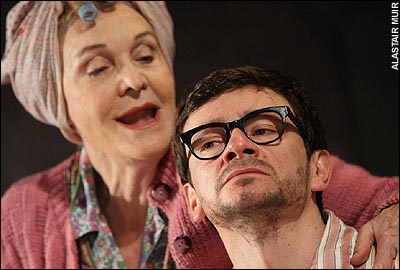 In the theatre group of which I am a member, we have a recent development  – we do a  fortnightly staged reading of different playwrights’ works.

We meet on Monday in a hostelry in town, and as a group read a play out loud. The magic of a photocopier is still a powerful force in the theatrical world. Parts are assigned to various people for said reading. And as we are in a beer tavern, liquid refreshment is available on tap for those with a thirst. We read the play out loud to each other. At the end of the session we agree on which parts we wish to perform. We agree to re-read the play during the coming week, and to reconvene a week later to do a semi-rehearsed staged reading in front of any audience that wishes to witness it.

As it’s not properly rehearsed – and the scripts are on stage with the actors throughout – it’s a far more casual experience than a proper play. The challenge being that as you have the script in your hand you have no excuse to mess us your lines. A cold, static reading would be a dull experience for the audience however,  so introducing performance elements is required. You try to follow the stage instructions. But you must keep your eye on the page. You don’t want to lose your spot.

Last Monday we read a one act play by Harold Pinter called ‘A night out’ along with several short sketches. Despite my marginally more mature years, I volunteered to play the part of Albert – a twenty eight year old Momma’s Boy and office skivvy,  who at a company party decides he’s had enough. In typical Pinter style there is menace and tension behind the seemingly mundane scenarios and conversations. And those pauses. Good lord. Nothing may be vocalised but a lot is said.

It was splendidly entertaining playing a sinister office drudge, hen-pecked by Momma  and who one day snaps. I’m not sure whether it was equally entertaining for the audience, but I hope my improvisational ability allowed me to follow the script instructions. I tried to give old Albert a touch of menace.

I’ve appeared in two short Pinter plays previously. While in Amsterdam the group in which I was a member, combined two short plays, which it brought to the FEATS festival. This is an annual festival  of English language amateur theatre groups around the continent. The location varies each year. In 2014 it was held in Luxembourg in June. And it was the hottest June I can remember. In ‘Precisely’ – a ten minute play set at a civil service party, two senior civil servants chat casually about their plans for the population. I played a cocktail waiter. It was immediately followed by ‘Mountain Language’ in which I played a brutal security guard to a political prisoner. I had one line in that play.

I like to imagine I imbued that line with a suitable level of threat and gravitas.

And I hope I was suitably pitiable and threatening as the namby-pamby at the reading last night..

1 thought on “A Pinteresque night out”