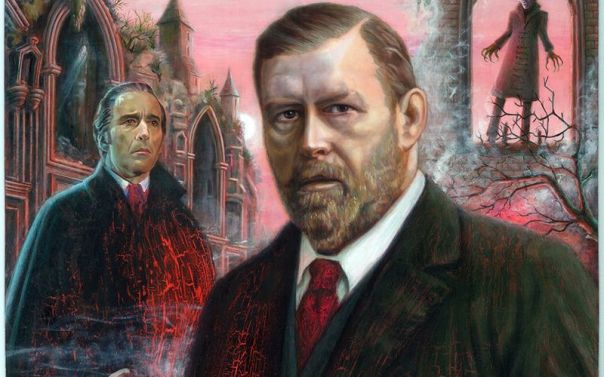 Set in the 19th century ‘Shadowplay’ by Joseph O’Connor is a fictionalised account of the life of the author of ‘Dracula’ – Dubliner Bram Stoker.

Born in Clontarf in 1847, during the early years of his career Bram Stoker worked as a civil servant for the Court of Petty Sessions in Dublin Castle. As a sideline he wrote theatre reviews for the Dublin Evening Mail – which was co-owned by the horror fiction writer Sheridan LeFanu. In 1876, having written a positive review of Henry Irving’s portrayal of Hamet in the Theatre Royal in Dublin, he was summoned to Irving’s suite at the Shelbourne Hotel. They became good friends and when Irving returned to London, Stoker, and his new wife Florence traveled with him. For the next twenty years Stoker was the manager of Irving’s Lyceum Theatre, durig which time he wrote his gothic novels – to zero success.

‘Shadowplay’ is largely about his life at the theatre and his relationships with Irving  (the leading Shakespearean actor of his day, and the inspiration for Stoker’s most famous creation Count Dracula) and Ellen Terry – the leading lady of the Lyceum Theatre and the Victorian theatre scene.

The book tells the tale of a man, working in the shadows of two alpha personalities and his fruitless efforts to have his own writing taken seriously or even noticed. It is a humourous and engaging account of life in the theatre and the megalomania and melodrama of the leading thespians of his day.

The book is circumspect about Stoker’s sexuality. He was widely rumoured to be a repressed homosexual – friends with both Oscar Wilde and Walt Whitman – who had an unrequited love for Irving. The book reflects this well. Stoker loves his wife but his devotion to Irving take precedence.

The story of a quiet, loyal, unassuming man it paints an atmospheric picture of theatre life in London, as Jack the Ripper is stalking the streets of the East End. Told in the rich, plummy style of nineteenth centuty literature, it contains O’Connor’s usual biting humour (one of Stoker’s pious bosses in Dublin Castle sneeringly asks him ‘Is a woman of the stage, ever more than two steps removed from harlotry?’)

The egomania of the theatrical profession (more specifically the acting community) is recounted with caustic observation (Ellen Terry tells a relatable tale of how to react to a colleague’s terrible performance – you need to lie profusely, and then lie some more about how wonderful they were.)

We read the book in the knowledge that while Stoker’s work was never a success during his lifetime, and in fact was the cause of hideous anger and jealousy in the likably villainous Henry Irving; but it is Stoker’s work that survives. Thanks to his wife Florence Stoker, the character of Dracula was copyrighted. In the decades after Stoker’s death ‘Dracula’ has sold tens of millions of copies and been the subject of hundreds of television and film adaptations. Stoker himself has achieved no higher honour than having a pub and annual Halloween festival named after him each year in his native Dublin. Meanwhile the entertaining but pretentious figures of Irving and Terry – so confident of their own immortality – are now merely footnotes in history, and remembered – if at all – for their association with their legendary theatre manager.

For someone who has dabbled in the dark theatrical arts this feels like poetic justice. The writing is what is important. The text is the art – the acting the interpretation of said art. While film has changed the situation somewhat – in that unlike during Stoker’s time, a performance can now be captured for posterity – it isn’t as an actor that Shakespeare is revered for the character Hamlet; it is as the writer.

This book feels like justice for Bram Stoker. ‘Shadowplay’ is a wonderful book.