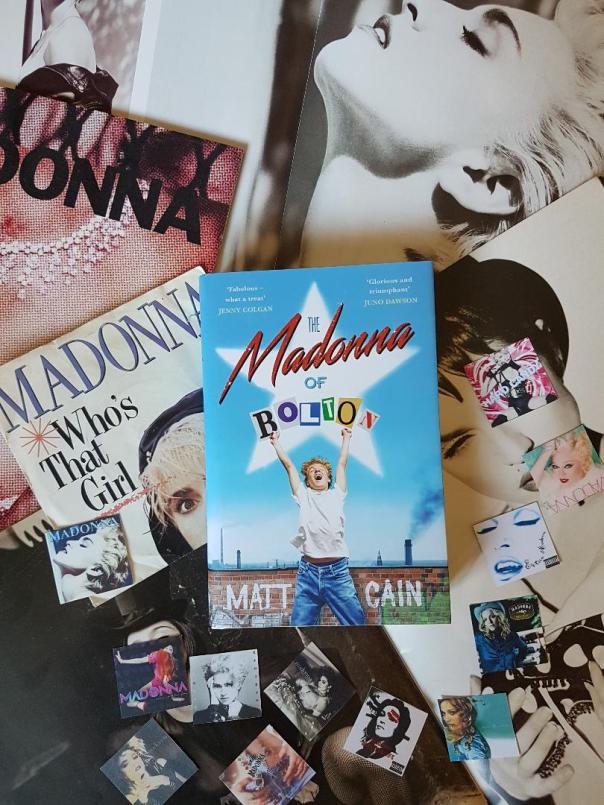 ‘The Madonna of Bolton’ is the third novel by Matt Cain. Having been rejected thirty times by publishers – apparently because the main protagonist of the book Charlie Matthews is gay – it was finally published through a crowdfunding campaign which reached its target within a week.

It tells the story of the life of a gay boy born in Bolton, in the north of England in 1975, and how all the definitive events of his life are mirrored in the songs of Madonna. His struggles being bullied, his isolation at school; his strained relationship with his father; his miserable life as a closeted teenager; his move to Cambridge to study and his eventual flight to freedom in London. For every major happening there was a Madonna song to console and inspire him.

While I am not from Bolton, and my own life in Limerick in the 1980s was not the same as the central character – Madonna didn’y play a gig in Ireland until the 21st century  – this book is almost a mirror image of my own life. Not the specific details for sure, but there is something about Madonna’s rise to stardom in the mid-1980s that seems to resonate very powerfully with gay people who were realising their sexuality at a time that the AIDS crisis was unfolding and where homophobia was rampant – England with its noxious Thatcherite Clause 28; Ireland where homosexuality remained a crime until 1993.

I read the book relating strongly to the tale – naturally I was an enormous Madonna fan growing up, and remained so until the ‘Confessions on a dancefloor album’ after which,  I didn’t need superheros any more. But back in that grim time of 1980s Limerick Madonna was a great big shining star in the sky for us funny boys.

‘The Madonna of Bolton’ is not going to win any literary awards, but who cares. Its significance is that it recounts the tale of growing up gay for my generation. Its relatable, in a manner that Edmund White – while a brilliant author – is not.

While the attempts to shoe-horn a Madonna song to relate to every event in Charlie Matthews’ life gets a little bit clunky at times, this is a minor quibble. A crowdpleasing, page-turner of a book ‘The Madonna of Bolton’ is highly enjoyable read., and its existence on bookshelves in libraries is a good thing.