The Irish Museum of Modern Art is currently hosting a retrospective of the life and work of British artist and filmmaker Derek Jarman.

I have been aware of the name and the reputation of Jarman since the late 1980s when in secondary school I started reading Empire magazine. Empire was (and is – it’s still published once a month) a British film magazine which reviewed new films; video releases and did interviews and features with actors and filmmakers. Being a British director, Jarman’s work was discussed on a regular basis. He was an artistic, independent film maker, who thrillingly made films with gay themes. I never saw any of these films but I knew their names ‘Sebastiane and ‘Caravaggio’ and ‘Edward II’ and ‘Wittgenstein’ and ‘Blue’. I was also aware of him through my perusal of ‘The Face’ magazine. In particular from an article about the terrifying practice of ‘outing’ which developed in New York in the 1980s.

During the 1980s when the gay male commnuity across the world was being decimated by AIDS, direct action groups in the US and UK engaged in street protest against the refusal by a homophobic government to tackle the crisis. In New York groups like ACT-UP (AIDS Coalition to Unleash Power) and Queer Nation started postering subway stations with images of closeted celebrities and politicians and business people, lambasting them for staying silent in the face of so much death in their communities.

In the UK the group OUTrage! formed by Peter Tatchell engaged in similar tactics. Having being diagnosed HIV+ in 1986 Derek Jarman was one of the only public figures to be open about his diagnosis, and was an active member of OUTrage!

I was petrified of being found out. Looking back I can see that I was being irrational These activist groups didn’t ‘out’ private citizens – never mind closeted fifteen years olds residing in county Limerick at a time when homosexuality was illegal in Ireland. Logic doesn’t come into this equation. I was simultaneously fascinated and repulsed by OUTrage!

This retrospective is a major exhibtion exploring every element of his career on the silver jubilee of his death from AIDS related complications.

From his early paintings in the 1960s to his twelve  feature films which began with ‘Sebastiane’ in 1976 and continued until the film ‘Blue’ from 1993. By 1993 Jarman had gone blind from complications from AIDS. Released four months before his death at the age of 52 in 1994, ‘Blue’ is a single shot of a blue screen over which Jarman and some of his previous collaborators – including Tilda Swinton and Brian Eno, narrate Jarman’s tale and vision. It was fascinating to listen to this personal account of his pending death, and a screening room is showing the film on a loop.

There is a wide selection of his paintings on display, which showcase his rebellious nature, and fiery spirit in his quest for gay liberation.  There’s a cinema room shoiwing his films – other than ‘Blue’ – in rotation; as well as a selection of some beautiful costumes worn by Tilda Swinton (including the gown she wore as Queen Isabella in Edward II)

Also featured are pictures and acccounts of his life at home and his political activism throughout his life. 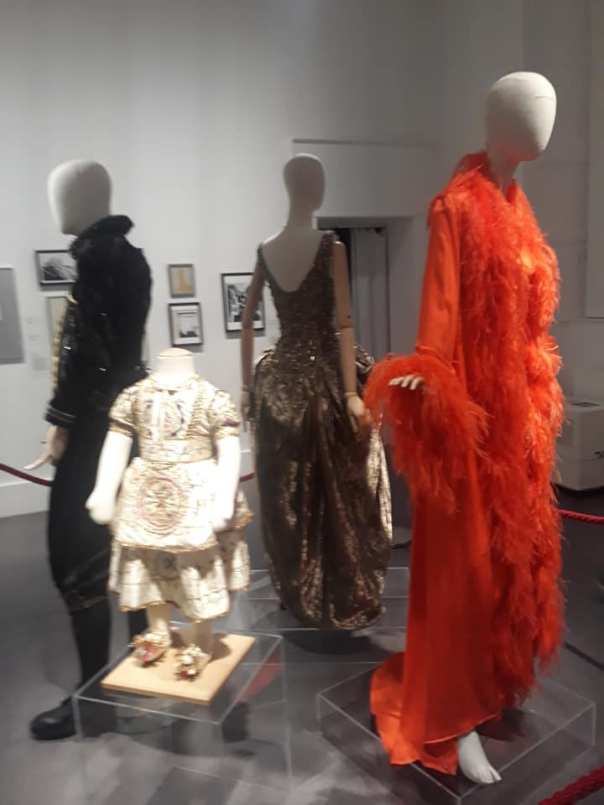 Before I had been to ‘Protest’ I had wrongly assumed that I has never seen any of Jarman’s work. Little did I know that he had directed several music videos in the 1980s for a diverse group of pop acts – including the Pet Shop Boys; Marianne Faithfull; the Smiths and Marc Almond. These videos are quite beautiful and play on a screen in the centre of the room.

This is an amazing exhibition of the life’s work of a major artist – one of the towering figures of the late twentieth century arts scene in Britain.

‘Derek Jarman: Protest!’ runs until February 23, 2020. I know that I will be going back. I encourage you to do the same.