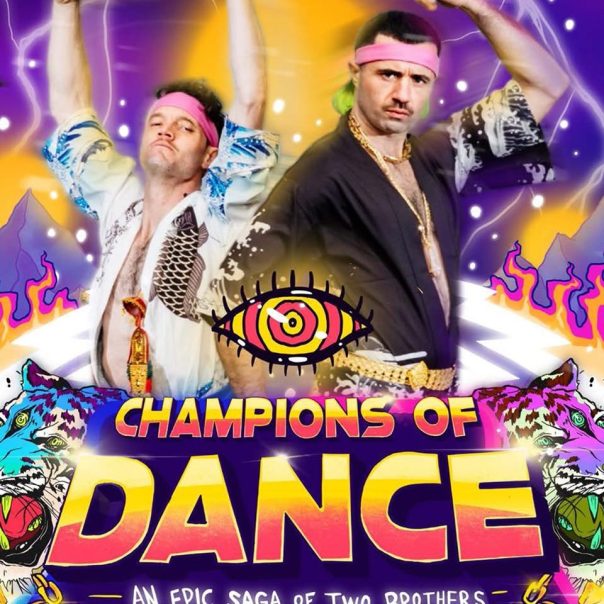 In 2016 I discovered that Dublin held a fringe festival every September, which occurred just before the Dublin Theatre Festival. It showcased more offbeat, less mainstream work. I was new back in town and excited to have instant access to English language theatre. I went to several shows that year – one of which was called ‘Riot’ (read my review HERE). One of the most memorable elements of that show was the Cork comedy-dance duo The Lords of Strut. The same pair are back at the Fringe this year with their latest show called ‘Champions of dance’ on the Peacock stage of the Abbey Theatre.

I hadn’t planned on seeing any shows at the Fringe this year. Partly out of sheer contrariness – in protest at how onstage artists over the age of forty seem to be largely absent from the programme (perhaps there is greater representation behind the scenes?). Partly because as it is the Fringe you are taking a shot in the dark as to what the quality of the show will be like. And finally because I need to stop going to so many shows – I may have a finely honed skill for obtaining freebies and reduced price tickets, but even still…

Then I remembered how much fun the Lords of Strut had been in ‘Riot’  back  in 2016. I would bravely make an exception to see their show, knowing that the quality would be good.

The Lords of Strut are Sean-tastic and Famous Seamus (played by Cormac Mohally and Cian Kinsella respectively).  This is their ‘origin’ story – how they became the saviours of dance. They are a pair of half brothers, born six and a half months apart whose ruthless Momager trains them from an early age to be the Champions of Dance. Older brother Seamus dreams of meeting his father. Be careful what you wish for young Seamus.

The show is part comedy routine, part play, part dance show. And it is absolutely hilarious. Our intrepid heroes are a pair of clueless wannabes who dream of stardom. Their interactions with each other and with the audience (where Daddy Dearest may be hiding) are side-splittingly funny, while the expertly choreographed dance routines would be impressive in a show that focused solely on dance. The 1980s soundtrack is all killer, no filler – I felt a shiver of excitement when ‘I need a hero’ by our Bonnie Tyler played.

Standing ovations have been cheapened through overuse. The Lords of Strut absolutely deserved theirs.

‘Champions of Dance’ plays another three shows in the 2019 Fringe Festival. Beg, steal or borrow, but go see it.

1 thought on “Theatrical: ‘Champions of dance’ by the Lords of Strut, at the Fringe”