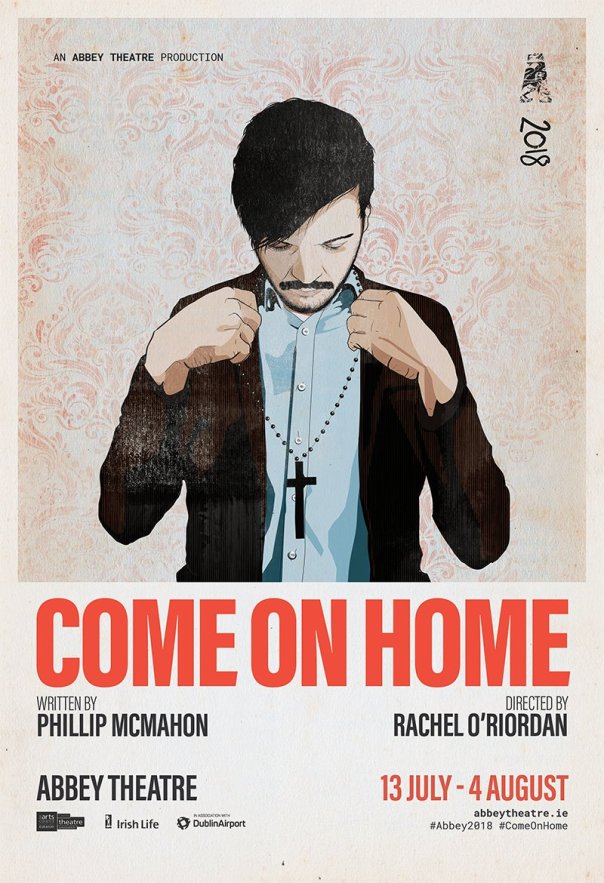 My original tickets were for Friday July 20th. However as I was sunning myself in Malta on that date, somebody else got the use of them. Having seen his previous play ‘Town is Dead’, I was keen to see Irish playwright Phillip McMahon’s latest work ‘Come on home’ at the Peacock Theatre. I booked a new ticket for last night.

An enjoyable evening of theatre it was too. Old Mrs. Donnelly has carked it. She lies resplendent in her coffin in her small town living room, for the wake. Her funeral is the next day. Her youngest son Ray (Ian Lloyd Anderson) wanders about the house in his jocks, drinking cans. His older brother Michaal (Billy Carter) who has been estranged from the family for decades, has just arrived home for the funeral. Having fled the seminary, and subsequently Ireland – for being gay and bringing shame on his clan – he has not seen any of his family in years. Ray has remained in the unnamed village with his pregnant girlfriend Aoife (Kathy Rose O’Brien), who dreams of starting a new life in Manchester, away from the prying eyes and suffocating atmosphere of the village. Meanwhile older brother Brian (Declan Conlon) is a rage-filled alcoholic living in the town with his acerbic wife Martina (Aislin McGuckin).

There’s nothing like an Irish funeral to bring long suppressed memories and resentments to the forefront. Brian engages in battle with Michael, who he sneers at for running out of town. Martina rails against Michael for showing up only after his mother had died, even though it was she (not even a blood relative) who had to do the heavy lifting in the care of the now dead Mrs Donnolly – despite the fact that the two women hated each other (I liked the device of having the corpse onstage in a coffin in the sitting room throughout the play. It brought to mind my first ever appearance on stage as a corpse in ‘The real Inspector Hound’ by Tom Stoppard in the Crea Theater in Amsterdam so many years ago).

The performances were strong – particularly by McGuckin and Anderson (I spent the play thinking that he looked vaguely familiar, and only once it was over did I realise that he had appeared on the big screen in ‘Dublin Oldschool’ last month). The bitterness, rivalries and tension between grieving, competitive brothers rang true. The script was darkly humourous and often intriguing.

Parts of the play were slightly problematic though. Certain elements did not ring true. The side plot of clerical abuse has become almost a cliché in Irish plays, and seemed unnecessary. The relationship between Michael and a different priest seemed tacked on for no good reason. Most concerning was the feeling of being in a time vacuum. The play was set in the present day, but – references to downloading aside – it felt like it was set a generation ago. When the character of Martina referred to herself as a ‘culchie’ the reason dawned on me. This was a Dublin person’s interpretation of life in a rural village. Any person from beyond the Pale knows that we country-folk NEVER refer to ourselves as ‘culchies’ – only Dublin folk do that. We can be from towns of 5000 people and regard ourselves as sophisticated urban dwellers. It somehow felt that this village was set in some time-warp in the 1950s, rather than the present day.

It’s was a mildly annoying distraction – not a show-stopper. That quibble aside it is a strong, interesting piece of theatre, with moving performances, tight direction from Rachel O’Riordan and a set that will be recognised by anyone who’s ever visited Nana in the country.

‘Come on home’ runs until this Saturday 4th August. Well worth seeing.