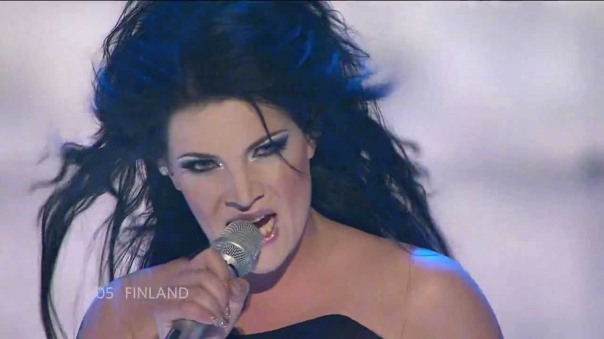 In 2006 Finland won the Eurovision Song Contest, when the band Lordi romped to victory with ‘Hard Rock Hallelujah’. At the time I was firmly embedded in the Finnish tribe of Amsterdam, so I was aware of the intense celebrations. This was Finland’s first victory. I, being Irish, was much more blasé about the whole thing. Ireland had won it seven and a half times previously (Linda Martin’s second place position in 1984 with timeless classic ‘Terminal 3’, is the half victory – she may not have won the overall contest, but the moral victory was hers).

As is always the case, the following year the winning country hosts the competition. So Helsinki in 2007 was the glamourous location for the Festival.

I would describe myself as a mild Eurovsion fan – perfectly amenable to watching the show, and particularly the results if it is on television, and I am at home.

Naturally I love ABBA – and although they are the very essence of Eurovision, they have sort of transcended the competition – but I would not be a huge fan of the pageant itself. A fair-weather fan maybe?

Not so some of my friends. One such friend from Amsterdam would probably be able to tell you who came 9th in 1997, without thinking about it. He downloads and listens to each country’s entry, months prior to the main event, and can predict with an almost uncanny certainty that song’s  position in the final.

Some old friends from Dublin would have been equally fanatical.

They were all traveling to Helsinki to witness the serious business of cheesy music. I was tagging along – more anxious to see Helsinki and Finland for the first time. We arranged to meet up with the Dublin contingent.

Five young men on a trip. And not a wife or a girlfriend between us – all of us being confirmed bachelors (same sex marriage didn’t exist then).

Helsinki was a beautiful city. Broad boulevards, shining sun (it was May) , so much to see and do.

We took an afternoon ferry to the sea fortress of Suomenlinna, where one of the Finnish guys had completed his military service. As one of the Irish people was disembarking from the boat when we returned to Helsinki, he paused and said ‘This reminds me of Barbra Streisand in ‘Yentl’ just before she starts singing ‘Papa can you hear me?’ Does that sound really gay of me?’

‘YES’, we all roared in response.

We visited the Euroclub where we met the unfortunate Finnish contestant for that year – Hanna Pakarinen. It is so rare for a country to win on successive years, and the host country’s contestant doesn’t even get a week long jolly in some exotic foreign location.

I didn’t know who she was, but one of the Finnish people told me that she had won Finnish Idol or some such competition. I bounded over and said hello, and told her that I was convinced she was going to win the following evening. I was not strictly telling the truth, never having heard her song. I wanted to be supportive though. The guffaw of amused laughter with which she responded, told me that she was not convinced of her own chances.

We saw the show on the big screen on Senate Square in the city, which was thronged to capacity, and celebrated when a Serbian woman – who looked like one of our tribe – triumphed with ‘Molitva’.

Afterwards we repaired to the gay karaoke bar called Mann’s Street. This bar had two rooms connected by a narrow corridor. A karaoke machine was set up in one room, where solemn Finns engaged in this national sport. Karaoke is a serious business in Finland. The other room was just a regular bar with TV screens and a sound system.

We positioned ourselves in the doorway of the TV room. I was standing in the corridor.

I had noticed him when I had entered the bar. The roomy gentleman in the heavy metal t-shirt. When I describe him as ‘roomy’ I simply mean that he was one of the most spacious people I had ever seen in my life. I know it is indelicate and rude to reference someone’s weight, but really there is no other way to describe him. He was extremely tall, and morbidly obese.

A couple of drinks in, as I was standing in the corridor, he approached the TV room from the karaoke room. Owing to his size and the narrowness of the corridor I squeezed up against the wall to allow him easy passage by me.

He stopped directly in front of me, looked at me, leered, raised his t-shirt above his head – exposing his gargantuan belly. He pressed forward, pinning me to the wall; his mounds of sweat coated, smelly flesh enveloping my face. He jiggled into my face, banging my head against the wall in doing so. I couldn’t breathe. My spectacles became dislodged from my nose and ended up somewhere on my forehead.

He reached down and placed his hands between my legs and squeezed, while making some perverted slurping sound.

He removed himself from my face and crotch, and blithely carried on his way.

It can’t have lasted more than three seconds

I stared around in horror and disgust. My friends were standing right beside me.

‘Oh my god’ I yelped, straightening my specs. I felt quite distressed. ‘What the hell was that?’

I was not best pleased that they all laughed. Then again I was laughing too.

Why am I even mentioning this encounter?

Well I’ve been reading the news reports about Al Porter’s alleged behaviour as a ‘sex pest’.

My initial reaction when I read the story ‘Well why don’t they smack him one, if he gets all gropey with them without consent? That’s what I’d do.’

Except, then I remembered that wasn’t how I’d reacted. It was too sudden, and unannounced and brief. By the time it took me to react, it was over.

This is by no means a pity party for myself. I was not traumatised by the event. It did not make me love Helsinki any less. I am not planning a pilgrimage to return to that bar to confront the inner demons awoken by the experience, as these demons don’t exist.

I know that some people might have a worse reaction than I had to such an incident, and if they did that is certainly their right.

I however, don’t feel any need to tattoo #MeToo on my forehead. That is my right.

To me, it was just a brief, ugly, uninvited encounter on a very pleasant holiday.

The stories in the news about all these Porter-Weinsteins has just reminded me of my own holiday I guess.

I am planning a holiday in Helsinki next May. No reason not to. A lovely city.