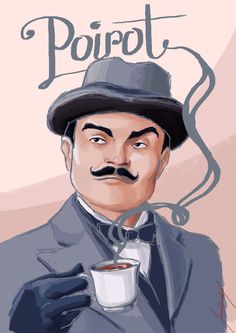 At the age of twelve, I read ‘Cat among the pigeons’ by Agatha Christie. It was the first novel of hers that I’d read. It introduced me to the character of Hercule Poirot – the portly, eggheaded Belgian detective – whose favourite tipple is sirop de cassis – who travels the world, solving murders committed by the rich and infamous.

I instantly fell in love with her books – peopled by villainous vicars, vengeful governesses and dirty foreigners bringing their suspicious continental ways to the idyllic life of rural England. Although if the truth be told – at least in the world of Agatha Christie – the countryside was in fact extremely dangerous.  You couldn’t leave your cottage to partake of some afternoon tea and cucumber sandwiches, without some heinous murder being committed by some eminently respectable pillar of the local community.

It was almost like a precursor to ‘Murder She Wrote’ – the 1980s TV show where celebrated crime novelist Jessica Fletcher wrote her books, in the village of Cabot Cove. Every time she left her house, a murder would be announced. The joke went that, if you ever saw Jessica Fletcher, you were advised to run, as you could well end up dead.

I devoured Agatha Christie books during  my teenage years. I was spoiled for choice. In the course of her over fifty year career, she wrote eighty murder mysteries.

When I  reached adulthood, I didn’t stop reading her books, but I certainly slowed down. I assumed that I’d ploughed through them all. When you are dealing with such an output of work however, you would occasionally come across one that you had not read before (or more often, one that you’d forgotten having read. Only as the murderer was being revealed by Miss Marple or Hercule Poirot, would I remember that I’d read it previously.)

The books were formulaic. Usually set in the world of the fading gentry, they generally were about 250 pages long. A vile murder would be committed, and every character who survived would have a motive. It would take the incomparable detective skills of a geriatric spinster or a comical Belgian detective, to figure out the culprit. This would be revealed in the last chapter, as all the suspects would be assembled in the drawing room of a big country manor.

In Agatha Christie world, murder was so very genteel. And often involved arsenic.

Some months ago I was home in Limerick. Attending the Milk Market on Saturday, I was browsing through the second hand book stall. I happened upon ‘After the Funeral’ and picked it up for a mere two euros.

I am glad that I did – it was one of the few books by Christie, that I had never read.

The story is typical. At Cornelius Abernethie’s funeral, his surviving family are gathered at Enderby Hall  – the stately mansion where they had all grown up. His foolish sister Cora announces during tea and crumpets ‘He was murdered wasn’t he?’

Everyone is horrified, as there had been no suspicion of foul play.

The next day – after all the mourners had gone home – a gruesome discovery is made by Cora’s female companion Miss Gilchrist – the body of her mistress hacked to death.

Had Cora been telling the truth about the murder of her brother?

In the final chapter, all the cast are assembled in the room where Cora had made her proclamation.

Wonderful book. It took me two days to complete it.

I think I need to pay a return visit to that book stall.