It’s been years since the Mammy went to the Milk Market in Limerick. She was in need of broccoli and spuds. One can purchase these in a supermarket of course, but that’s not exactly a morning out. We decided to go on an adventure for my weekend at home. To the market.

The market as always was wildly busy. I made a beeline for the cheese stalls. I needed to do some research for my ongoing mission to find my favourite cheese. Cheese merchants always have taster samples. All were worthy cheeses. I am refining my palate.

After the market I bid the Mammy farewell and took a wander up to the Limerick Gallery of Art through the People’s Park. I was impressed by the garish red bandstand. I never knew that Limerick had such a vulgar monument. I love it.

There were two new exhibitions opening in the gallery today. The first was ‘Headland’ by Elizabeth Magill. Upstairs was ‘Landmarks and Lifeforms’ by Danny Osborne and Frieda Meaney. I have absolutely no idea what either of them actually meant. But I experienced an overwhelming urge to touch the Osborne pieces made from lava. I resisted. I am classy you see.

Elizabeth Magill was present at the gallery, as she had given a lunchtime speech about her display. She was still there. I however was mesmerised by her companion – an art teacher from my secondary school. I was quite starstruck by the teacher. I hadn’t seen her in over twenty years. She was looking good.

It was all too intellectually overwhelming for me. I went to the cafe for caffeine.

A bit later in the day I was joined in town by some other people for a walk around medieval Limerick. A walk which I had done only a week earlier. I would be able to appear knowledgeable, thanks to my minutes of research the previous week, reading the wall posts dotted around the area explaining the origin and history of the district.

This is a bad idea when your companions are from the architecture profession. Imagine my horror when it was pointed out to me that the Masonic Lodge was only twenty years old , and simply designed to look ancient to fit in with the surrounding buildings.

I had quite the education that day. 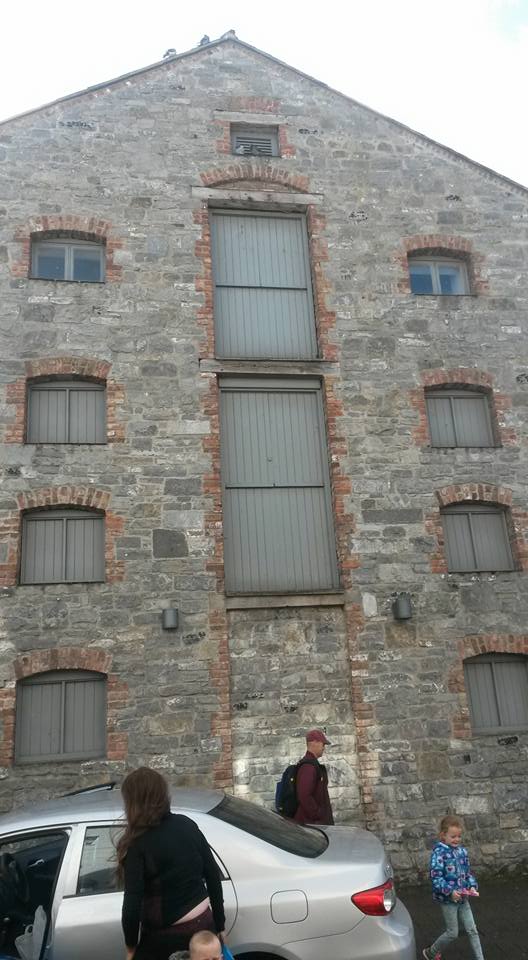 It is the entrance hall and museum, attached to King John’s Castle. Not only is it only about twenty years old but the doorways are not in a straight line with the triangular tip of the roof. The reason being is that while the front and back of said building are parallel, the sides are at a slight angle to each other, meaning the doorways are marginally out of sync. This wall is a side wall and the one that is misaligned.

I will never unsee that now.

Or another act of criminal vandalism.

When the new visitors’ centre was being built for the medieval castle, part of the castle had to be sealed to prevent public access, using a railing system. It is illegal however,  to make any alterations to a national  monument. The castle is a national monument. Railing needed to be installed. But how would said railing be attached to the castle? The builder wanted to drill. The architect in his dilemma said ‘ That is not allowed. I am going home now. I wonder how this will be resolved.’

It was resolved overnight by the drill fairies.

I felt as violated as the poor castle when I saw it. Then again, I suppose it’s a very tiny screw in a wall. This is a castle that has been at the centre of several bloody battles over the years. I am sure it will survive.

Walking along the river Shannon we left the island into the Georgian city centre. I was lamenting the fact that an old block of buildings has been allowed to fall into dereliction, after the developer who bought it went bankrupt after the economic crash (never fear though – this block is now earmarked for an opera house). One of the buildings now lying empty is the site of Quinn’s Bar – an old haunt of mine during my feckless youth.

I was pointed in the direction of an alleyway in the middle of the block, and a discreet door to the side. During the 1960s at the height of the Cold War a bomb shelter was created underneath these buildings to hide the mayor of Limerick and other dignitaries in case of Soviet attack. It’s entrance was through this door.

With the threat of nuclear attack from North Korea growing, I wonder if said bomb shelter is back in use.

I want to gain admittance.