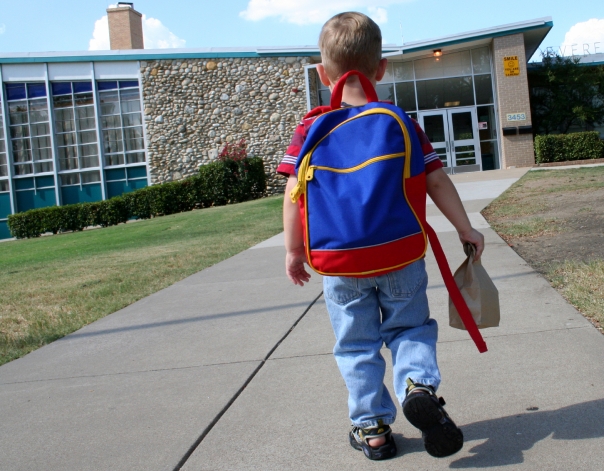 I guess that by tomorrow all the schools will have reopened, and be fully operational for students of all ages. The five-year-olds’ not having a clue about how long education is going to last. The seventeen year olds facing into one of life’s more brutal experiences – the Leaving Cert. Regardless of the age of these students however, the personal impact on me, is easy to define – it will  be a very protracted journey to work tomorrow.

I was in Limerick over the weekend, visiting the Mammy. One of The Sisters was home as well. We were chatting about the psychodrama of the beginning of the school year,

I was then reminded of my very own first day of school, many decades ago. Will I ever forget it? More to the point, will my mother ever forget it? It is quite the story.

I am the younger in a set of Irish twins. ‘Irish twins’ is an expression to signify a pair of siblings between whom there is a twelve month age gap. This is not unique to Ireland (Britney Spears’ sons are Irish twins for example) but seems quite common here – particularly among people ‘of a certain age’.

My sister is exactly twelve months older than I am (well 1 year and nine days if you want to split hairs about it.) We were born during the month of May on successive years during the mid-1970’s. As she was older than I was, logically she started school the year before I did.

I was due to start school in September in the boys’ school which was located beside the girls’ school. At the time we lived a ten minute walk away. The June before I started, I had been diagnosed with Type 1 diabetes – at the age of four. This was back in the days where it was treatable, but the treatment was nowhere near as slick as it is today – the needles were longer and reusable for starters.

So on my first day my mother had spoken to the teacher to warn her to keep an eye on me – if my sugars went too low I might collapse.

She recalls hearing the anguished howls of distress from the  four year old boys at the school gate. Clearly they weren’t keen on being parted from their Mammies for this horrible place called school. This differed from the previous year on the first day of school for my sister. Apparently there, the atmosphere had been on a knife edge. If one girl had broken the seal and started crying there would have been a subsequent avalanche of grief. They managed to hold it together though.

The morning continued. The parents departed with promises of returning at lunchtime.

At 11 o’clock we had a morning break, where we were allowed out into the enclosed school yard for fifteen minutes. As I was entering said yard, some monstrous bully of a five year old told me that I was not allowed to enter.

I remember feeling quite indignant. In that instant I decided that education was not for me. I was going home, to spend my formative years with my Mammy and my younger siblings. I turned around and walked out the front door of the school. Homeward bound.

Getting home was not a difficult task – having done it every day for the previous year bringing my sister to school. I knew the route – I was not going to get lost. I don’t remember much traffic on the roads – then again it was 11am in a quiet residential neighbourhood. Probably, perfectly safe.

As I waddled across the road towards my house I could see my parents chatting in the back garden (both were off work that day).

My mother says that she will never forget how her heart nearly came out of her mouth when she heard my excited squawk of  ‘Mammy, I’m home’ through the hedge.

They frogmarched me back to the school. The teacher would be in an absolute panic. It can’t be a pleasant feeling to actually lose a four year old in your care. They closed their ears to my (in my mind) quite reasonable argument ‘Why didn’t you come for me Mammy?’

Arriving back at school, all was peaceful.

Thankfully teacher hadn’t even noticed that I was missing.

For the first month of my full time education I had a twelve year old boy (from sixth class) as a personal bodyguard during 11 o’clock break.

Is it any wonder that I have notions?

2 thoughts on “Back to school – for Murphy”