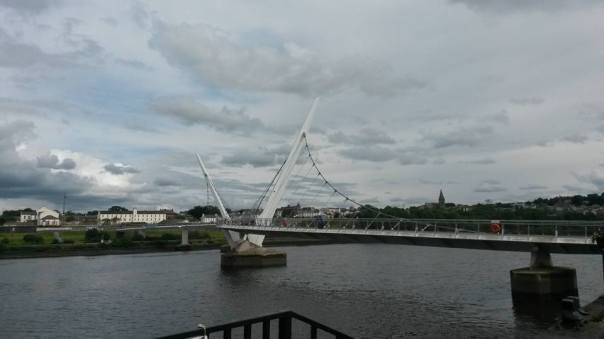 After my weekend in Donegal it was time to head home to Dublin. To do this, I would first be taking the Northwest bus service from Carndonagh to Derry.

The trip into Derry was uneventful. It was a service that didn’t seem to have specific  stops. People using the bus simply flagged it down, as it made its way through the Inishowen peninsula. It made sense – it’s a very rural part of the country. People know when the bus passes, so get themselves to the side of the road on time for it to stop for them.

Approaching the city I noticed some graffiti on road-signs. In Northern Ireland the official moniker of the town is ‘Londonderry’, but that name is used by the unionist section of the North’s population. The nationalist population refer to it as Derry.  In the Republic the official name is also Derry. As we crossed the border the roadsigns changed immediately from Derry to Londonderry. But on several the ‘London’ segment had been painted over on the signs. I guess this would tell you the political allegiance of the community we were passing through.

The bus station was in the heart of the town close to the river. Derry is a walled city of approximately 100,000 people. I had been told that walking the walls which circumnavigate the old city was a quick and easy way of seeing the place. The walls are fully intact, and were built in the early 17th century as a defence against English and Scottish settlers. They provide a walkway from which you can view the renaissance style streets within the walls, and also the communities living outside the walls. They are a mile in circumference.

Never having been to Derry I tossed a mental coin to decide which way to go. To the left then. I’d end up back where I started. There were several tourists with the same idea as me – taking pictures of the cannons dotted along the route.

Within minutes I was looking out over a clearly loyalist section of the city. Today was the 10th of July. The following evening was the 11th. On this night massive bonfires are lit by the Orange Order to herald the 12th of July – the day the Orangemen celebrate the victory of the protestant William of Orange over the catholic King James at the Battle of the Boyne in 1690.

Three hundred years later this victory is still celebrated all across the north by the more – shall we say – extreme segments of the unionist community. Over the course of the Troubles in the last fifty years the 12th of July has been one of the most contentious and worrying dates in the province’s calendar. Most moderate unionists and nationalists seem to pick this day to travel for their annual holiday out of the country. What is left is the more militant elements. On the 12th Orange Lodges don their orange sashes and go for a march. Their demands to be allowed to march through catholic, nationalist areas celebrating ‘their’ defeat of the catholics became a major flashpoint each year, as the catholics – quite reasonably in my view – felt that this was needlessly hostile and provocative. And they didn’t welcome the marches. Not one bit. So they responded.

Looking out over the walls,  the Union Jack flew high from the buildings. Pallets and tyres had been fashioned into a pyre, about three stories high in preparation for the following night’s ‘festivities’. In the distance I could see a wall painted in black proclaiming ‘Londonderry west bank loyalists still under siege. No surrender.’

It made me sad. The Orange Order and loyalists claim that this is all part of their culture and heritage and deserves protection. However it doesn’t seem to celebrate anything other than their ‘otherness’; their isolation; their refusal to accept that they are sharing this part of the world with a different group of people. They seem to be defined by their anger, and what they are against. It may be their culture, but mother and baby homes were once part of Irish culture. And no-one in their right minds would celebrate and protect those.

If the unionists want their culture to be taken seriously I think they need to neutralise the hatred that seems to define it.

I decided stepping off the wall to greet the track-suited gentleman surrounding the pyre. The following evening some Irish tricolours would be burned on the fire. With a surname like ‘Murphy’ I thought my presence might not be appreciated.

I carried on. Within minutes I was looking out over the other side of the wall. At the Bogside. 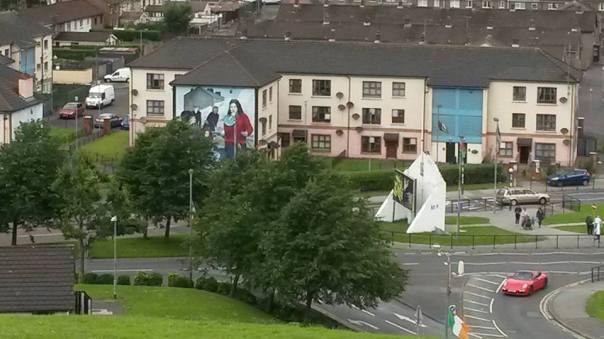 The modern ‘Troubles’ in Northern Ireland (or the North of Ireland as some prefer)  began as a civil rights movement in the 1960s. The government at Stormont in Belfast was staunchly unionist and deeply discriminatory towards the catholic population. Discrimination in housing, employment and education was rampant. And was propped up by a gerrymandered political landscape (3 council districts in Derry had a combined population of 25,000 people – 15,000 catholic and 10,000 protestant. As the separate groups lived apart from each other the three districts were divided in such a way that the unionists controlled 12 seats and the nationalists 8).

In 1972 in Derry at a peaceful civil rights demonstration the British Army murdered fourteen unarmed civilians. The inquiry at the time erroneously claimed that the victims were all gunmen. (A subsequent inquiry found otherwise). The Troubles in all their hideous glory ensued.

The Bogside was a catholic, republican stronghold throughout the Troubles. This was a working class community which developed just outside the Walls (catholics were barred from living within the walls when the area was originally populated). At the start of the Troubles the gable end of a house was painted ‘You are now entering Free Derry’.  This has become an iconic symbol for Derry. Subsequently many buildings in this district were painted with various scenes and emblems from the struggles. These murals remain today, and give a fascinating insight into what life must have been like during those dark times.

I didn’t hesitate. I was curious, so down the hill from the walls I trotted, and began my exploration of the neighbourhood, taking pictures of many of the famed murals. I paid a visit to the Museum of Free Derry which told the story of the conflict from the perspective of the Bogside.

The Bogside is an area I had always been interested in – not just because of the Troubles. As a baby gay I was fan of Eurovision winner Dana. When the sixteen year old won that (at the time) prestigious competition for Ireland in 1970, her Bogside community must have been incredibly proud. (Let’s not mention how Dana has morphed into a right wing, religious person). Famed journalists Nell McCafferty and Eamon McCann also hail from this district. 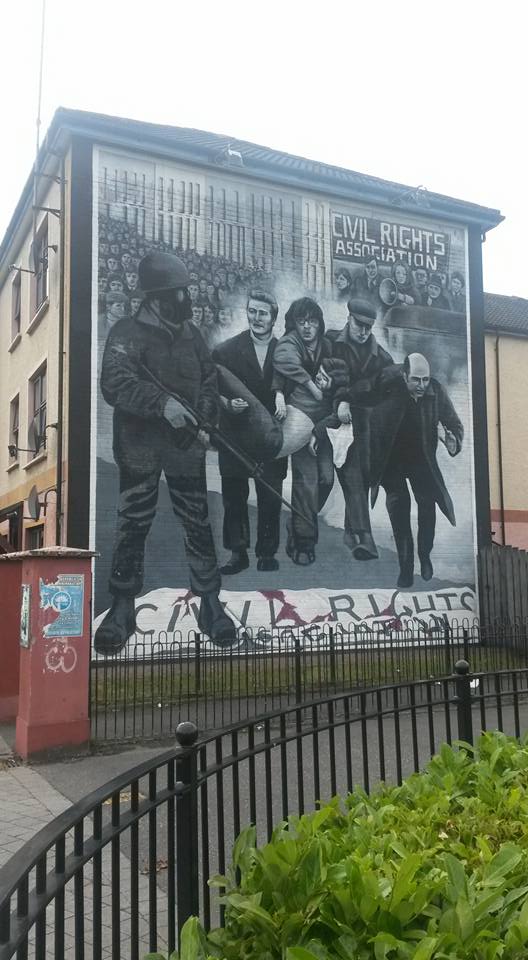 After my journey I made my way back up the hill and completed my walk on the walls.

I hauled my weary bones into the Debenhams cafe. Not because Debenhams is a destination (other than for its nice line of socks) but rather for the view of the River Foyle and the Peace Bridge you get from its fourth floor vantage point.

After my coffee I decided that I would walk across this pedestrian bridge to the other side of the river. The view of the city and surrounding countryside from the bridge is spectacular. Built in 2011 it is a symbol of reconciliation between the two communities. From my brief visit I reckon there’s still a way to go. But we live in hope.

My bus was departing in 45 minutes.  I still had eight pounds sterling to spend. So I went to Cappuccino’s Cafe outside the station for a late lunchtime feast of egg and chips.

I boarded the bus, with my book for the journey home and waved goodbye to Derry.

2 thoughts on “An afternoon in Derry”