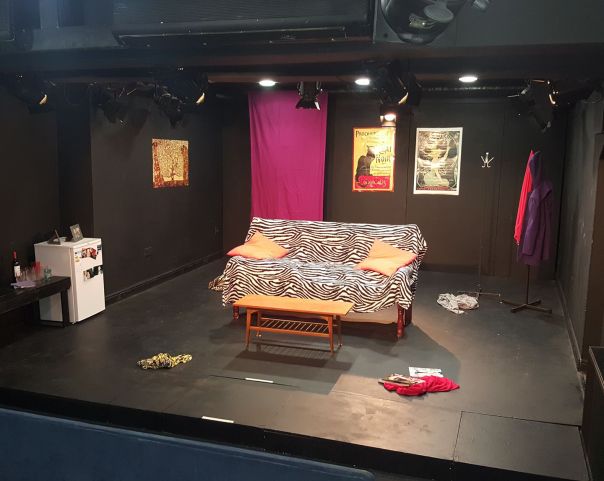 Monday was quite the day. It was the world premiere of ‘An Unexpected Party’ (some might say that it was the Dublin premiere or my own personal premiere, but I am feeling grandiose).

To add to the pressure, the sister was driving over from Limerick with some friends. I know that having a family member in the audience is not a logical reason for feeling more fraught with nerves, but logic doesn’t really factor into this theatre sport.

We met in town where we had lunch in The Church (a rather splendid bar/restaurant in a renovated house of God.) Despite my terror, my appetite was unaffected – it rarely is. I wolfed down a chicken and stuffing sandwich. I walked her to the theatre – just to soothe my own mind that she wouldn’t get lost. Off she then went to do some shopping in the big smoke. I went to the theatre.

We had done the tech/dress rehearsal the previous day – and were lucky to get two full run throughs as well. The show that precedes ours on the bill – ‘Confessions of a Mormon boy’ only got into the theatre on Monday – coming as it was was from the States. Our call was 3pm. We had one hour to get into costume, prepare the set, and to ensure that the vodka bottles were full (of water – real life booze in a make believe world is not advisable if you are concentrating on getting your lines out in the correct order).

As it was such a fast set up, it seemed that in a flash we were in the dark , backstage with props in hand, the house lights down as the audience settled.

The opening bars of ‘Tilted’ by Christine and the Queens started playing.

Having a cup of tea in the bar afterwards my sister told me that she could hear my voice throughout the whole thing. She said it sounded like mealtime Chez Murphy – although we are usually sober and less angry.  She told me that she loved it – this was very pleasing (and I am grateful that she did not follow through on her earlier threat to stand up in the middle of the show and scream ‘Who wrote this piece of shit, and why was that idiot chosen to play the part of Declan?’. That’s how we Murphies roll in our personal conversations with each other.) Her friends also enjoyed it very much.

After she departed –  back to Limerick – I repaired to the Church again, with a fellow cast member for a post mortem and a chicken caesar salad. We psyched ourselves up for the evening show. This was at 9pm.

We had to be backstage throughout the Mormon boy’s show – there was a fifteen minute turnaround between shows so we had to be ready (and quiet as church mice) while he was performing. I plan to see his show later in the run, when we are more settled into a routine.

When he was finished we lined ourselves up, props at the ready. Once more into the breach.

The audience reaction was positive – the feedback I received was very complimentary.  The reaction from the theatre-goers during the performance seemed to confirm their enjoyment.

Upon completion we stripped the set – so Mormon boy can hit the stage without hindrance on Tuesday.
Upstairs we trotted for a beer to unwind. We then toddled over to the festival club in Oscar’s to meet some fellow festival participants.

My head hit the pillow at 1am. I slept like a baby.

This evening we do it all again.

You are all invited to ‘An Unexpected Party’. It’s at 9pm every evening this week until Saturday May 6th (with a 4pm matinee on Saturday). The venue is the Teacher’s Club at 36 Parnell Square.

You can book your tickets at http://www.gaytheatre.ie – or get them at the door.

2 thoughts on “Two shows in one day”