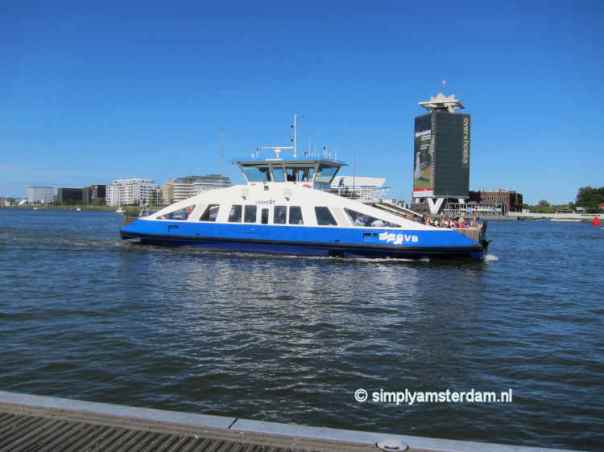 Right behind Centraal Station in Amsterdam – at the north of the station –  lies Het IJ. This is a body of water than makes up Amsterdam’s waterfront. Because of the centuries old Dutch tradition of reclaiming land and manipulating water supply I am not sure whether Het IJ is a lake or a river. Or whether in fact these days it can be regarded as an artificial body of water.  It separates the north of the city from the south. One manner of getting between the two sides of the city is via a free ferry crossing.

There are several different ferries from the station crossing this body of water. They take you to various different parts of the North of the City.

The north of the city is a largely residential part of Amsterdam. Even though it lies within the ring road motorway and is officially part of the urban centre of the town, it feels like a separate city to the larger southern part. Travelling there from the south feels like a proper journey – in large part because of the boat crossing.

There are other methods of crossing between the two parts of the city – underground motorway for example. Or the long awaited underground metro system which is currently scheduled to begin service in 2018. Being a merely seven years later opening and billions of euro over budget, it will be a stunning day when this finally opens. The ferry crossing is the most picturesque method of doing so. It gives a wonderful vista of the city waterfront. The heavy boat traffic – trawlers and cruise ships and police boats and commuter ferries give the accurate impression that this is  a port city,  long reliant on the water trade.

The most regular ferry crossing is between the station and Buiksloterweg – a straight line journey that take less than two minutes. This crossing takes you to the EYE film museum, cinema and café – a new, very modern building that has become emblematic of the city.

Slightly longer and slightly less regular is the crossing to Ijplein – a deeply boring residential neighbourhood of midrise apartment blocks built in the 1970s.

The longest and least frequent ferry crossing goes from the station to NDSM Werf. This crossing takes about twenty minute by boat, and takes you to the edge of the city to the beginning of the massive port – Amsterdam port is the second largest in the Netherlands after Rotterdam. This part of town is home to massive warehouses. Two of these warehouses are home to the bimonthly Ijhallen – Europe’s largest flea-market – whether it’s furniture or second hand clothing or random junk you need, on two Sundays a month you can take the free ferry, pay your entrance fee and search for that bargain.

As this part of town is still largely unpopulated by humans, many super-pubs and super-cafes have opened in the unused warehouses., Pllek or Noorderlicht among them – both of these bars have massive terraces and are pleasant places to while away a sunny summer afternoon.

A pleasant thing about this ferry crossings is the fact that they are free – before the underground motor tunnel was built, the boat was the only way to cross between the two sides of the city