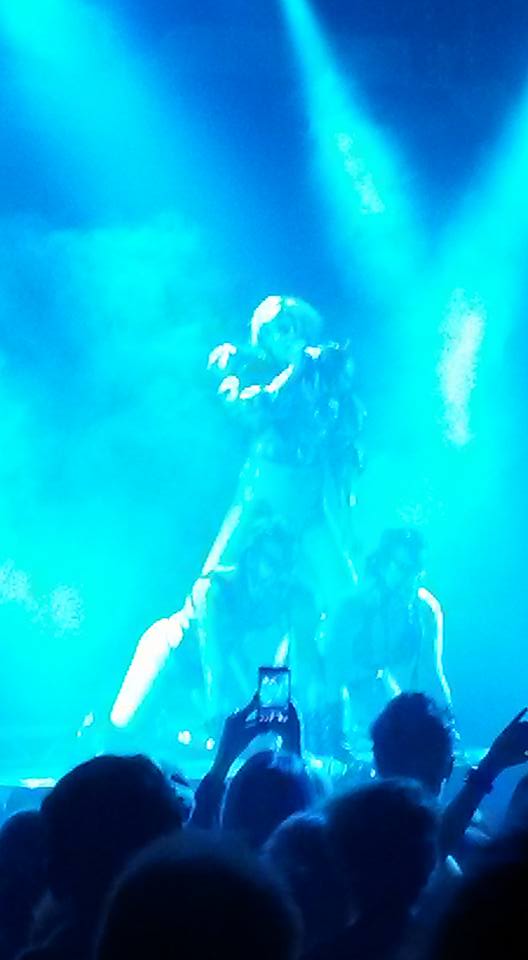 Once upon a time there was a girl from Farnborough in Hampshire who shared a flat with an anti-social cat named Midnight; an anti-social Dutch gentleman called Muis; and yours truly. One evening she came home from work pronouncing the wonders of a Canadian singer named Peaches. I listened to the song ‘Fuck the pain away’ and I loved it. What an incredibly aggressive; rhythmic; funky song. The lyrics served notice that this singer was no wilting flower.

Years went by, and every now and then I’d hear snippets of Peaches – her duet ‘Kick it’ with Iggy Pop for example; or randomly on Dutch radio. As Dutch radio doesn’t censor English language swear words – although Dutch curses are very much censored – you could occasionally catch ‘Fatherfucker’ in its original glory during the morning drive-time.

She’s one of those singers that I have been peripherally aware of for a long time. She’s a bit too niche for mainstream fame maybe. Her music is so angry, her lyrics so controversial and she herself is a little bit obscure – beloved by the music press and her small but rabid fan-base; but largely unknown to the wider public. You wouldn’t see her on Graham Norton too regularly on a Friday evening. One of those indie icons that cool people (and me) know about.

Last month I was lolling about on the Ticketmaster website and I saw that Peaches herself, was playing a gig in the Academy on Abbey Street last night.

In a moment of spontaneity I bought two tickets. I was reasonably confident of sourcing a companion to attend with me.

Sadly the chosen companion was accidentally out of town. On Saturday I was therefore left with a spare ticket. Which no-one seemed to want.

For a brief moment I thought I too would stay at home. Screw that though. I could jolly well go my myself, thank you very much.

And I am so glad that I did.

Immediately upon entry I spotted two friends. I lunged in their direction, hoping they wouldn’t mind some company. They were pleased to see me. All was now good with the world. Although why I was feeling awkward about attending a gig on my own, is a mystery to me. Going on holiday alone or to the cinema alone doesn’t phase me in the slightest. Perhaps live music is a shared experience, but I’m just not used to sharing that experience with a roomful of strangers, without a friend to accompany me.

Peaches had two support acts. That must be a confusing position. These unknown artists are playing to an audience far larger than they are accustomed to. Meanwhile only a tiny handful of people are there to see them. It can’t be good for their self-confidence. Although considering that performers require a healthy ego to get up on stage, it’s probably immaterial to them. They are getting their music out to an audience. And that’s the whole point of being support.

Both the support acts were adequate. I rarely enjoy support bands. I view them with a misplaced sense of resentment – they are delaying the main act. 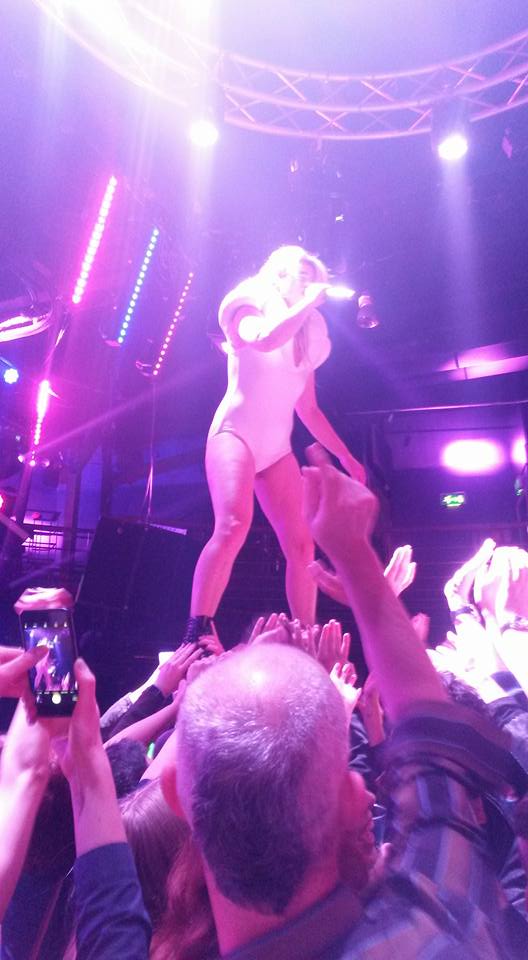 Well when Peaches arrived,  she didn’t arrive quietly. She exploded onto the stage in an orange, shaggy-trimmed costume; a hat shaped like a vagina; and two dancers dressed like Cousin It from the Addams Family – their faces invisible.

There were no musicians on stage – simply Peaches singing live, her dancers, and the DJ.

It was magical. The music pounded. Unlike other concerts which tend to start big, dip in the middle and then rise again for the finale; this concert kept the same intense, driving pace throughout the entire show. The music is a blend of electronic dance and rock music.

Peaches ain’t just a singer though. She’s also a performance artist, who on several occasions of pre-calculated insanity, decided to take a stroll. On the audience. When I say ‘on the audience’ I am speaking literally. Holding the hand of a big, beefy security guard she steps off the stage and is elevated and supported only by the hands of the throngs of Peaches disciples, who ensure that she doesn’t collapse to her gruesome death, on the grubby floor of the Academy. During her song ‘Dick in the air’ a cloth penis shaped cone is inflated using a wind machine. It is propelled out over the audience who keep it in the air. And Peaches – in her trademark demure manner throws herself into it – both the penis and song. The audience again keeping her in the air.

The songs are all electric –  forceful, angry, and very sexual. Not sexy per se – although she is a fine strapping lass. But the lyrics and the energy is hypersexual and aggressive in a style you’d expect to see from a football hooligan. Except Peaches can actually sing wonderfully well. The costumes were extravagant – but she spared some budget by using only tiny amounts of fabric – for both herself and her crazed dancers. The dancers were a perfect complement to Peaches – deranged, scary and possibly a bit touched in the head.

The finale was the classic ‘Fuck the pain away’; which was followed by two encores. The audience was delirious by this point. It may not be vast, but it is absolutely crazy about her. I can see why. She’s a cult like figure. And I am a convert.

The show was short enough only about seventy minutes. I didn’t care. The frenetic pace and energy would have worn out a woman half her age.

If Peaches plays your town, you must beg, borrow or steal. But you have to go see her.