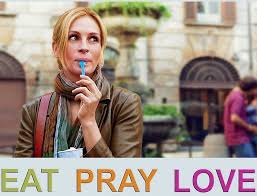 Recently I have acquired access to Netflix through the kindness of a friend. Diving into TV shows that friends rave about is a temptation that I have so far avoided – it just seems like a commitment too deep. To watch a programme with six series will take an extraordinary length of time. Instead I have been looking at films available on the website. This week I have seen ‘Goodfellas’ and ‘Mean Streets’ – both directed by Martin Scorcese and starring Robert De Niro, back when he was a good actor and before he started his more experimental career phase with movies like ‘Meet the Fockers’ and ‘Dirty Grandpa’. Both the Scorcese films were impressive, hard-hitting and violent. I needed a palate cleanser after that testosterone driven sequence of films. Therefore last night I decided to watch a Julia Roberts film – the 2010 adaptation of Elizabeth Gilbert’s memoir ‘Eat, Pray, Love’.

From her breakthrough in ‘Steel Magnolias’ in 1989 (where Julia played a big-haired, Southern diabetic, whose condition was terrifyingly more cinematic and fatal than my own version of the exact same illness) Julia was one of Hollywood’s major movie stars appearing in blockbuster after blockbuster (only interspersed with a couple of films – ‘Michael Collins’ and ‘Mary Reilly’ where she sported an Irish accent as horrific as her male counterpart Tom Cruise’s in ‘Far and Away’. I always appreciated a Julia Roberts film – it would usually be entertaining, if not earth shattering. After a record breaking run of mainstream success she took a career breather for a few years. Then came her big return as a leading lady in ‘Eat, Pray, Love’.

When the book ‘Eat, Pray, Love: One Woman’s Search for Everything Across Italy, India and Indonesia’ was released in 2006 I regarded it with horror. It was the tale about the struggles of a wealthy, New England travel writer Elizabeth Gilbert who recounted her yearlong search for spiritual and personal exploration in the aforementioned countries. It sounded horrific to my cynical ears – even before the mantra ‘own your privilege’ became widespread. My jaded thought was ‘what can the life experience of a thirty-something American who is rich enough to take a year off to find herself possibly teach me?’ Based on the title I was sure there would be cod psychology about healing yourself through food, prayer and shagging, in poorer countries.

I like Julia Roberts though, and I had not seen this film. Being something of a completist I decided to rectify this.

As I suspected it was utter bilge. Julia is married to an equally lovely looking Billy Crudup. But they married too young, and now want different things from their wealthy lives. So Julia divorces him and starts a relationship with a struggling New York based actor James Franco who – although attractive – always looks like he stinks of B.O. and cigarettes. When that doesn’t work out she decides to take a yearlong sabbatical to find herself. So far, so Oprah’s Book Club.

First stop is Rome, a city she has never visited where she immediately meets a circle of lifelong friends. She spends the next four months stuffing her face with Italian cuisine while never gaining an ounce of weight; and learning Italian – to fluency of course. In four months. She gives her Swedish friend a meaningful lecture on loving yourself for who you are, before taking off once again.

This time to India. Where she checks into a Hindu retreat to find her inner peace and balance. The other American she encounters at the retreat in an abrasive, obnoxious gentleman who through his rudeness and ignorance helps Julia to spiritual awakening. So much so that Julia is able to convince a seventeen year old Indian woman to accept and embrace her unwanted, arranged marriage. That’s the power Julia’s enlightenment gives to the world you see.

Next to Bali in Indonesia where Jules befriends a wise old medicine man who tells her to take a chance on love. She also befriends an Indonesian healer who tells the tale of how she has suffered since her divorce to raise her daughter – as a divorced woman is a fallen woman in that society. Julia to the rescue. She invents ‘GoFundMe’ by sending begging letters to her pals back in the States. She raises enough to buy her new friend a house. It’s inspiring to see such philanthropy and to see that all that centuries of systemic sexism needs is a dose of a white saviour with big teeth like Julie Roberts. As a reward for her grace, the universe gifts Julia a strapping Javier Barden to sex her up. All to the soundtrack of dreary Hallmark card clichés about empowerment

And they all lived happily ever after.

An entertaining Julia Roberts film? It’s not her best but pleasant enough to hate-watch bitterly.