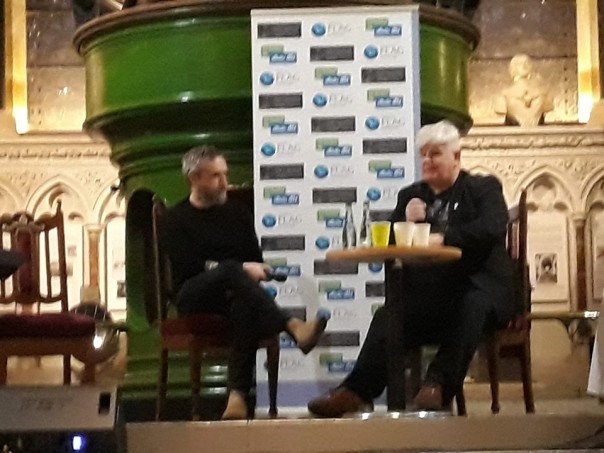 The town of Dun Laoghaire was the host this weekend, to the Dun Laoghaire Vinyl Festival. While I remember my first ever vinyl record – the 7″ single of ‘The Riddle’ by Nik Kershaw as a child way back in the 1980s, I wouldn’t be a collector of vinyl. I was aware of the festival because I follow an old sociology lecturer of mine from my University of Limerick days – Eoin Devereux – on social media. He announced that he would be interviewing Noel Hogan from the Cranberries, about the recording and release of the Cranberries final album ‘In the end’, after Dolores’ untimely passing.

I have been a fan of the Cranberries since that summer I spent in France on a college work placement in 1993, when news started trickling through about the breakthrough of a Limerick band in America.  The Cranberries were a huge deal for us teenagers from the mid-west in the early 1990s. Dolores’ death in January last year was very upsetting (I wrote about my reaction to that awful news HERE.)

I was curious to see how the rest of the band dealt with the devastating news of their lifelong friend’s death, and what the subsequent recording and release of the record was like.

It was an interesting tale. Dolores had recorded demo versions of all the tracks between June and December 2017. As a band the Cranberries always recorded extensive demo versions and developed their songs that way. When recording their albums the boys would work in the studio during the day, whereas Dolores would work on her vocals alone in the evening. Noel Hogan spoke of the huge loss they all felt recording this – their final album. While the group had existed prior to her involvement, her presence in the group is irreplaceable, so this album is their final act as a group. It felt poignant that these childhood friends huge life-changing adventure has now come full circle.

it was slightly surreal to see an old lecturer of mine  interviewing a fellow alumnus of St. Nessan’s community college. I have no idea of the precise context in which he uttered it,  but the expression I associate with Eoin Devereux is ‘nuts, sluts and pre-verts’ that he spoke of in the Jonathan Swift lecture theatre beside the canteen during some lecture way back then. As a closeted teenager in a country where homosexuality, divorce and abortion was illegal, it all seemed so achingly cosmopolitan and glamourous to my innocent ears. Decades later – in 2016 – I was mightily chuffed that a story I wrote for an anthology called ‘It’s a queer city all the same’ was included along with one of his stories.

Hearing the two Limerick folk mention places that I have known – Cassidy’s store where Dolores had a Saturday job; the Lark in the Park with 2FM; the docklands – was lovely.

It remains very sad that Dolores is no longer with us, but the other Cranberries can be happy that along with her, they have left an indelible mark on the world – and particularly on Limerick people of my vintage.

Everyone else wasn’t doing it. The Cranberries sure were.