I had been to North Africa before. The exact timing is hazy but I suspect it was in 2007 that a small group of us travelled to Egypt, and I ended up in a situation where an obstreperous camel pissed on my brand new designer trainers, beside the Pyramids. Egypt was spectacular but I still bear a grudge against that camel. It was time for my return to the continent. My destination – Morocco.

I was meant to travel to Marrackech in early 2016 shortly after my return to Ireland. The tickets had been bought, but in the weeks prior to travel I felt such an overpowering  sense of loneliness for Amsterdam that I booked an emergency trip to the Netherlands on the dates of my Moroccan holidays. I forfeited my flights to North Africa.

Not this time – I had a co-conspirator traveling with me. He was traveling from London, and I from Dublin. As Ryanair only fly on Sundays and Thursday, I booked a Sunday to Thursday trip. This caused some consternation with my fellow traveler who felt that a Saturday was a better day for a journey. He was right. But what could I do about the Ryanair timetable? The answer was simple – buy a dirt cheap one way flight to Seville on Saturday morning, enjoy a seven hour layover in that beautiful city in Andalusia and catch the connecting evening flight to Marrackech. And so it came to pass. 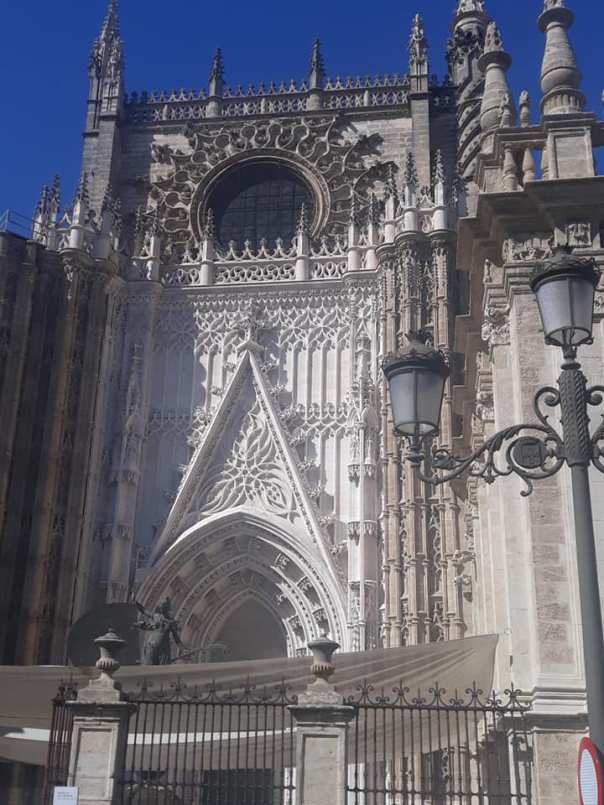 My stopover in Seville was whirlwind. It was enough however to make me want to go back and explore the area properly. I visited the imposing Plaza De Espana, and the Cathedral of Seville which impressed me with its gaudy and ornate glamour – a style favoured by Mediteranean catholic churches. Time constraints did not allow me to see the Alcazar Palace complex (owing to an urgent need to eat tapas and drink a beer on a terrace in Spanish sun). When I return I will explore the city properly.

What was alarming about Seville on that Saturday afternoon was how hot it was. It was 32 degrees. This was worrying. Marrakech was further south. What fresh temperature horror would await me there. A quick scan revealed an inconvenient truth. The forecast for the coming days ranged from 36 to 41 degress. With my blue legs this is catastrophic. Couldn’t be helped. I was on  the way.

Landing in the dark at 8.30pm I waited for my friend and we took a taxi to the Gueliz district in the city centre. This is the new city and is home to the shopping and dining areas, and features a strong French architectural influence – Morocco only gained independence from its French and Spanish colonizers in 1956 (although it is unique in North Africa for never coming under Ottoman rule). 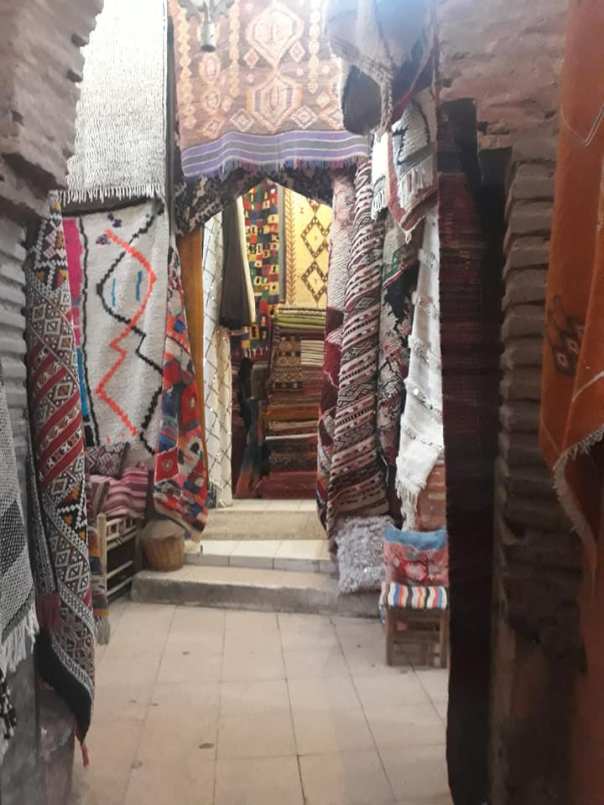 The old part of town – the Medina – is a walled maze of lanes and narrow streets which is not only densely populated, but is home to a beehive of stalls and street vendors selling a breathtaking assortment of goods – cloth, silks, spices, leather goods, jewelery and much more. It probably makes sense to the residents, but when you enter this rabbit hole then a map is of no use. You simply wander through the warren. It’s quite overwhelming. The noises, the smells, the motorbikes whizzing through the narrow laneways, missing pedestrians by millimetres, but never crashing into them, the vendors trying to attract your attention so they can play the haggling game as they try to sell their wares. And the ‘tour guides’ – young men who hassle tourists offering to take them places without being asked, in the hope of a cash reward. It took us an hour to find the Berber tannery such were our efforts to offload the persistent young men following us. When we stumbled into the Orientalist art gallery, we spent more time than was absolutely necessary on the rooftop terrace. The whole experience was quite overwhelming – in a good way though.

The following day started with some culture. The Jardin Majorelle in the New Town – a botanical garden and villa house originally owned by the painter who gave the garden its name. It was purchased and restored by Yves Saint Laurent and his partner Pierre Berge in 1980. It is a stunningly beautiful and atmospheric place, which also houses the Museum of Berber art (the Berbers are the original inhabitant of North Africa before the Arab invasion, and Berber culture, language and traditions remain strong in Morocco). Next door was the Yves Saint Laurent Museum which housed a stunning array of couture outfits he designed throughout his illustrious career. I am no fashionisto but even I could see that the pieces were works of art. What was puzzling was how openly the museum acknowledged that Saint Laurent and Berge were a couple. It was mentioned in a very matter of fact style – remarkable seeing as homosexuality remains a crime punishable by jail in Morocco. 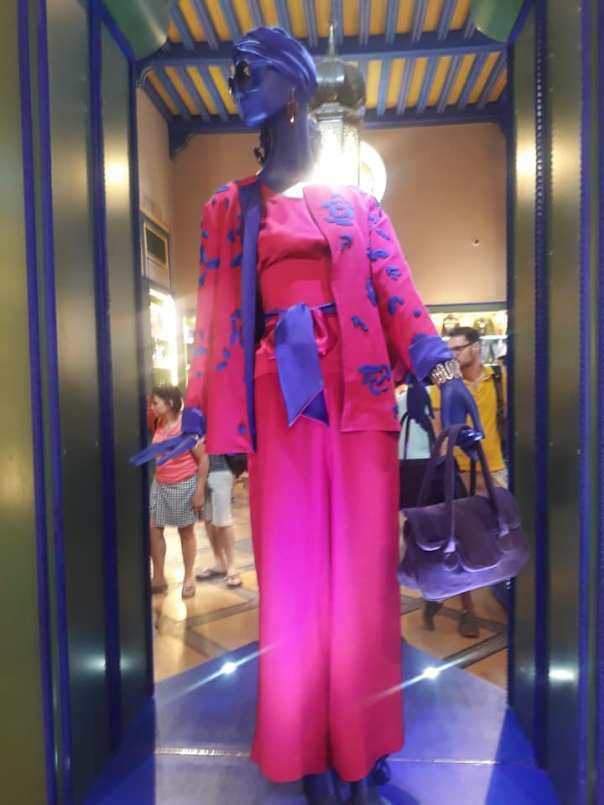 We made our way back to the old town – after being ejected from the kitchen appliances souk at the call to prayer. It was as colourful as ever – and I even haggled with a vendor as I purchased a pashmina as a gift. I was probably still ripped off mightily but I felt quite smug with my 40% discount.

Tuesday involved a bus trip to the UNESCO world heritage town of Essaouira. On the way we stopped to see the tree climbing goats of Argan – goats who climb the argan tree to eat the fruit. They excrete the stone inside the fruit as waste, and these are gathered to make argan oil – a local oil used for both cooking and cosmetics.

Essaouira is a fishing town. We randomly bumped into a friendly Englishwoman at the harbour. She has lived there for seventeen years. She took us to the fishing docks and told us that we ought to have sardines for lunch as that seemed to be what the day’s catch was. I didn’t need persuasion. Those were damned tasty sardines cooked before our eyes on the outdoor stall. That was proper street food, and I have no hesitation referring to it as such. 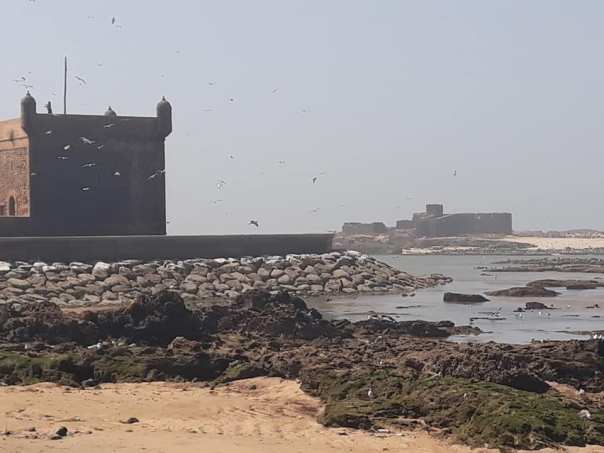 The walled town is like a more touristy, miniature version of the medina in Marrakech. We stopped for mint tea at an old synagogue that has been refashioned as a tea house, before walking the ramparts of the town which directly face the sea. We even entered an active Catholic church which caters to the towns minute Christian population.

On our return to Marrackech, dinner was consumed at a ritzy restaurant with its very own, sleazy lounge-lizard singer.

Today is  my last day here. I took a solo (my co-traveler having departed) excursion to the Ouzoud waterfalls in the Atlas Mountains. These are the tallest waterfalls in North Africa. The Victoria Falls are better known because of their width but the Ouzoud is two metres taller as the guide Ibrahim proudly pointed out. He also showed us a traditional Berber house – which is slightly less ornate than the 250 room monstrosity being built on the hill overlooking the waterfalls – the future home of the younger brother of King Mohammad VI. And there I was thinking that Prince Harry was a pointless waste of taxpayers resources. He’s got nothing on the Moroccan Royals.

My flight back to Ireland is at the unholy hour of 6.45am. This has been a a brief account of my Moroccan adventure. I will be back.

2 thoughts on “An Irish goat in Morocco”