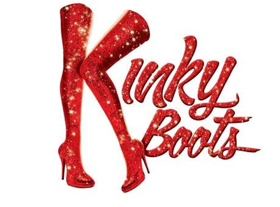 Last night for the second night in a row I was at the theatre– my fourth trip in the past fortnight. Sadly, in this instance I had to actually pay for my ticket – unusual having developed a cunning skill of sourcing freebies. As one would only hope – I go so often to the theatre, that my diet would consist of congealed bread and dripping with a side order of gruel, if I had to pay for all these tickets. Last night I went full Broadway, attending ‘Kinky Boots’ in the unfortunately named Bord Gais Energy Theatre (which thankfully has been re-christened as the ‘Bored Gays Theatre’ by some wags thanks to the fact that it shows big West End shows – in RingsEnd).

I collected my ticket at the box office and shuddered when I saw that I was seated in the Upper Circle. The Bored Gays Theatre is a cavernous space with an audience capacity of 2,300. The Upper Circle is in the gods,. Then again I had only paid €30 for the seat (€24 for the ticket and €6 paid to the scam-merchant that is Ticketmaster) so I couldn’t really complain. The only way to get a good seat for a cheap price in that venue, is to book a matinee ticket at the very back of the theatre, and you’re likely to be upgraded for free to the stalls for logistics purposes). In Upper Circle, it is difficult to make out the performers faces. Row G is the third from the back. Never mind. I watched the audience pile in. As soon as the usher closed the doors for the performance to begin I hauled my carcass to the front row of the Upper Circle to occupy a more expensive, vacant seat. I peered over the balcony and spotted a vacant seat in the lower Circle level, where I relocated for a birds-eye view for Act Two.

The show ‘Kinky Boots’ is a musical based on the British film of the same name from 2005, starring Joel Edgerton and Chiwetel Ejiofor. It is the tale of Charlie Price from Northampton who struggles to save his family shoe factory. One evening he intervenes when he sees a ‘woman’ being harassed by drunken hoodlums. He is attacked. When he wakes up he discovers himself in the dressing room of a drag queen named Lola (real name Simon). She laments the fact that her high heels break so easily. She would love to find a shoe that would support a sturdier ankle. Between them they concoct a plan to rescue the factory – by refocussing on the more niche drag market.

The musical follows the same plot. The male employees of the factory are initially uncomfortable with Lola / Simon (played here by West End star Kayi Ushe) who has been hired as a shoe designer. Factory worker Lauren (Coronation Street’s Paula Lane – daughter in law of the luscious Gail) has eyes on Charlie (played here by Joel Harper-Jackson) who plans to take his shoe collection for the larger foot, to the catwalks of Milan. The songs for the show are written by the legendary Cyndi Lauper, with the book by Broadway icon Harvey Fierstein.

It is a proper old-school Broadway stomper, with glitz, glamour, panache, razzle-dazzle and with hands so jazzy they are almost playing trumpets. As is always the way with these shows, the plot is slight. Lola is – of course – a sassy, tough cookie with a heart of gold (I long for the day when the sassy drag queen reveals her true character to be that of an unspeakably vile monster, purely to shake up the trope) . The homophobes discover acceptance (of course they do) and the finale is a show-stopping number with the entire cast doing the catwalk strut in Milan, all sporting blood-red, thigh-high Kinky Boots.

As it’s rare that The Bored Gays Theatre gets to premiere a show – its bread and butter is well established West End hits on tour – you are nearly always guaranteed to have an enjoyable experience at this theatre. ‘Kinky Boots’ is a very entertaining show, as I expected it to be. It runs until Saturday August 31st