‘One of your finest seats please’, said I to the check-in lady at the Westjet desk in Dublin Airport.

‘I am sorry Mr. Murphy, but you have no visa to travel to Canada’, said she.

‘Oh, but I do,’ said I with a smug chuckle. I had applied for, and received my eTA (electronic travel authorisation) three days earlier.

It turned out however that I had entered the wrong passport number when applying. My eTA was invalid and therefore I was not allowed to board.

My heart sank. I had been warned about this.

I applied online again, wondering how much a flight the following day would cost.

The flight was in 2 hours. There was no way I was travelling today, so I thought.

I decided to wait just in case by some miracle my visa application was processed in time for departure.

As I sat silently sobbing over my Egg McMuffin upstairs, my phone beeped.

My visa had been processed and had arrived in my inbox. Take off was in 45 minutes. I sprinted to the gate with my usual hippopotamus style grace, and boarded. My summer holiday to Canada was underway.

I was greeted at Halifax Airport by my friend Turner (this is his surname, but as we share the same first name, we address each other in the heterosexual male manner of using surnames. We have known each other for decades since becoming friends in Amsterdam at the start of the century). The sun was shining as we drove north to Cumberland County. We were staying at his seaside summer cottage at Coldspring Head which is in the province of Nova Scotia. The blisteringly cold Canadian winters mean that these houses are only seasonal, but for three months during the summer much of the population of this sparsely populated province take to their cottages. Upon arrival I was offered an ‘edible’. Marijuana has been fully legalised in Canada and can now be purchased in various forms. I consumed two gummy bears that had an herbal flavour. After about an hour I was feeling gently mellow – appropriate for the start of a two-week holiday. 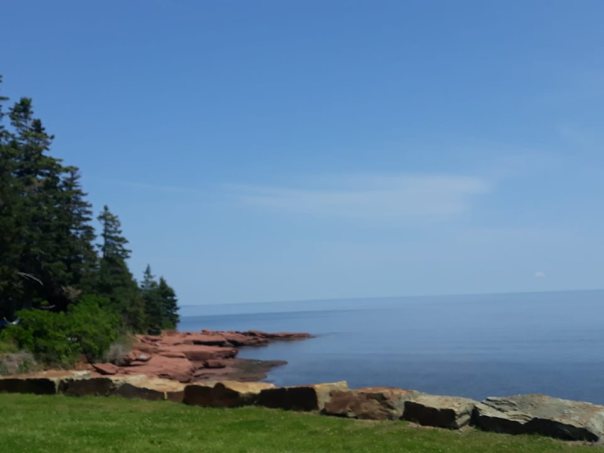 As we were staying on the coast, trips to the beach were a regular occurrence. On the first full day of my stay I slathered myself in factor 40 sunscreen to protect my delicately hued blue legs. I can only be defrosted slowly. In typical style I missed my feet so later that evening I was in agony.

Nova Scotia is approximately the same size as the island of Ireland. It is a peninsula on the eastern side of Canada with a population just beneath one million people. The landscape is green, rural and very pretty.

We went on various excursions throughout our stay. Springhill is a coal mining town about a forty-minute drive inland. During the 1950s there were two mining disasters (or ‘bumps’) that killed over a hundred men. It is also the hometown of the pop-country star Anne Murray, who sold over 55 million albums throughout her career, and who in the 1970s became the first Canadian female to score a US number one hit with ‘You needed me’. The town has built a visitor centre to commemorate her success. To my shame I had not heard of her before my visit to the centre. For the rest of the holiday (and possibly my life) ‘Animal crackers in my soup’ became my theme song. 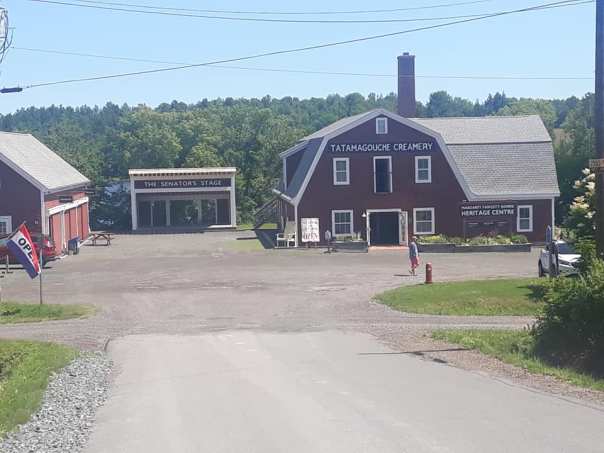 On another day we took a drive along the coast to a village called Tatamagouche. I had been told that this was a hip little town that has recently been undergoing a revival with young people moving back. You could tell – as there was a thriving microbrewery and funky little organic shops selling crafts and organic cheeses. I enjoyed the town, but was informed that after 8pm it reverts to be a sleepy hamlet.

On the drive home we stopped into the Tidnish Art Gallery and the Amherst Museum which gave an interesting insight into the history of the region. 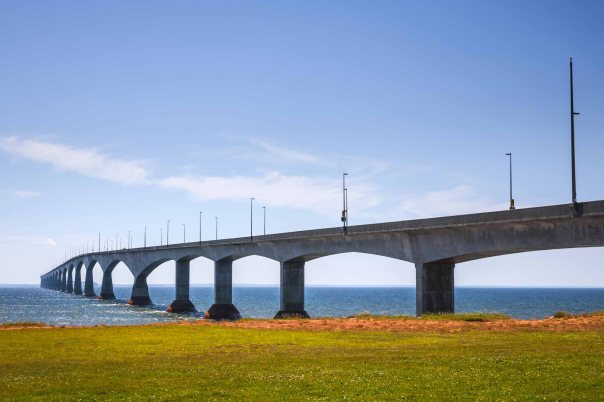 In preparation for my holiday I had read the book ‘Anne of Green Gables’ which is a childhood classic written in 1908 by Lucy Maud Montgomery. Set on Prince Edward Island (Canada’s smallest province) it tells the story of an orphan who goes to live on the island. Located barely an hour from where we were staying, a trip to Prince Edward Island (or P.E.I as it is referred to locally) was the only absolute must-do on my holiday. This island is accessible by ferry and by bridge. The bridge is about twenty years old and is about fifteen kilometres long. A truly remarkable feat of engineering.

On the way to the island we were listening to Maritime Noon – a very popular radio show on CBC Radio. The host was interviewing a food expert about the growth of the plant-based diet in Canada. Turner asked me if such diets were popular in Ireland. I informed him that veganism is indeed increasing in the homeland.

‘Well do you want to tell the presenter that?’ he asked.

‘Yes of course’ I replied jokingly.

As it happened, he had the number for the show on speed-dial. Within minutes I was on air speaking to the population of the eastern Canadian seaboard. I cannot recall exactly what I said, but I am certain that I was making it all up. I was told later that I informed the host that I was on the Confederation Bridge to P.E.I to visit ‘Anne with an E’ – which is prime-time Canadian TV show about Little Orphan Anne.  After my interview, Turner’s phone exploded with people telling him that they’d heard our interview. It was all very exciting. An enjoyable afternoon on the island followed. Charlottetown is the island’s capital and it is a picturesque and interesting place that I wished I had more time to explore. Next visit perhaps.

One of the highlights of my trip (other than the marijuana high from day one) was the afternoon a group of thirteen of us went ‘tubing’ on the Tidnish River. Tubing is an activity whereby rubber dinghies and boats are tied together and float downriver with the current. It was relaxing and serene – a wonderful way of seeing the verdant landscape from a new perspective.

One of the last days of my journey was spent in Parrsboro in the Bay of Fundy. This bay has North America’s fastest tide which you can see getting closer to the shore in real time. For lunch on that day I had lobster, macaroni and cheese – a possibly strange but delicious combination.

Speaking of food, the local cuisine was one of the best things about this trip. Canadian cuisine is famed for its maple syrup and bacon. I loathe maple syrup so did not partake in that delicacy, but much bacon was consumed. Crispy bacon is truly delicious. Another culinary highlight was the plentiful seafood. Not surprising I guess considering I was staying by the coast. Lobster and scallops would be regarded as expensive and quite rare in Ireland. While it is not cheap in Canada these are far more mainstream foodstuffs on that side of the Atlantic. In the fortnight in Canada I consumed more lobster and scallops than I had previously consumed in my entire life to date. Truly delicious.

My flight back to Ireland was on Friday night. On Thursday at lunchtime I bid farewell to my friends and made my way south to Halifax. I wanted to explore the city which is the capital of Nova Scotia. I travelled with another Canadian friend from my Netherlands days. Upon arrival we took a ferry crossing from Halifax to Dartmouth, before returning to have an ice-cream on the boardwalk of Halifax Harbour, which was full of the smells and sounds of summer.

The next day was spent in the Canadian Immigration Museum at Pier 21 on the harbour. Pier 21 was the place where immigrants into Canada were processed from 1928 to 1971. In the museum I saw that half a million starving Irish people entered North America at Halifax between 1845 and 1847 as they were fleeing the Famine in Ireland. Half of that figure remained in Canada (the other half proceeded south to the US). It was a moving experience being in that museum, as it captured the hopes and fears of immigrants to a new land. Having been an immigrant myself for many years (and a returned emigrant since 2015) I could relate my own experiences to the exhibition on display.

I ate my final lobster lunch before boarding the bus to the airport to catch the red eye back to Ireland.

All in all it was a truly wonderful holiday. I will most certainly be visiting Canada again.

3 thoughts on “My Nova Scotia adventures”