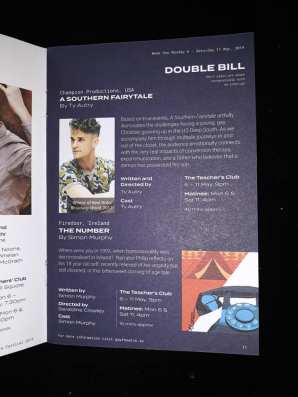 At 6pm last night in the City Assembly House on South William Street was the official launch of the 2019 International Dublin Gay Theatre Festival. As my paying job is in the industrial wastelands of County Dublin where I selflessly toil at the coalface of administration, an executive decision had to be made. So at 4.30 pm with an air of purpose I downed tools and departed for the day.

The City Assembly House is an absolutely glorious building. I felt quite notional as I swooped up the steps to this Georgian building. Built in 1771 it was the first purpose built public art gallery in either the UK or Ireland. In the 1920s the upstairs octagonal room – where the launch was to happen housed the (at the time illegal) Supreme Court of the Republic of Ireland.

Having undergone renovation the building is in use again. A most salubrious location for a festival launch. I entered and saw the festival programme beaming at me. I grabbed it and in typical style sought out my play. I gave a little whinny of excited happiness when I saw it. That called for a celebratory glass of wine which I was handed by one of the friendly festival volunteers. After some time chatting with old friends the launch began. The founder and artistic director of the festival (this year is its 16th year) Brian Merriman welcomed us all and gave an interesting speech about the exciting 2019 programme. This year there will be 21 plays over two weeks from across the world – from Ireland / UK / USA / Canada / Australia. And Limerick. Oh yes. I am representing Limerick with my show ‘The Number’. It is part of a double bill with ‘A Southern Fairy-tale’ by Ty Autry. Both our shows are about being young and gay – mine set in Limerick in the 1990s and Ty Autry’s about growing up gay in the Deep South in the USA. Playing in the Teachers’ Club from Monday May 6th to Saturday May 11th in the Teachers’ Club on Parnell Square.

The Minister for Arts, Culture and the Gaeltacht, Josepha Madigan then gave a speech congratulating the festival for the great efforts it has made to promote LGBT theatre in Ireland and across the world.

I met a fellow Limerick woman who is a radio DJ. I practiced my schmoozing muscles by asking her to interview me next week on her show – I guess there is no point in being shy about promotion. I gave her my number and told her that I will be available.

My friend – the playwright Lesley Ann Reilly – was also present. She too has a play in the Festival this year. Her play ‘Cello’ is about a young woman who discovers her recently deceased father’s gay love affair with a cello-maker while she was still a baby. I have read this piece and it is great. The only concern is that her play is on at the same time and dates as mine – hers is in the Pearse Centre. Luckily we both have eight shows each so people can attend both.

The excitement is building. Book your tickets HERE.