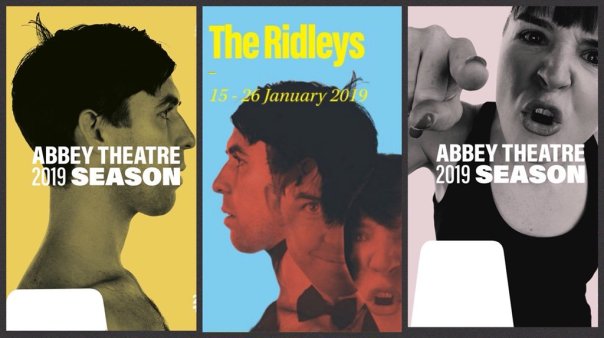 I love the theatre – there is something magical about waiting in the dark for a show to begin. A live performance is so much more immediate and wrenching than watching something on a screen. The joy generated by a good show and performance is electric. Having dabbled in the dark theatrical arts myself – as a performer, writer, director, stage manager; lighting technician and sound technician (when you work in no budget theatre, necessity requires versatility) – I can appreciate the effort that goes into getting a play from an idea in a writer’s head to the closing night. It can be gruelling (not in the same manner as working on a chain gang might be, granted, but tiring nonetheless). I attend a show, wanting to like it – mentally willing the actors to give an impressive performances.

Last night I went to the First Free Preview in the Abbey of ‘The Ridleys’ by London playwright Philip Ridley. It is a pair of companion plays – ‘Tonight with Donny Stixx’ and ‘Dark Vanilla Jungle’ – that has been produced by the Theatre Upstairs company, for the Abbey Theatre on the Peacock stage. Each play is a monologue. The first – ‘Tonight with Donny Stixx’ – stars Rex Ryan as the title character. He is a troubled London soul who dreams of fame as a performing magician. Darkness and tragedy lie beneath the surface. As I entered the theatre Ryan is sitting onstage, naked, with his back to the audience. I am sure this symbolised something. I have no idea what though – when the lights come up for the performance to begin, he had donned a prison uniform. And it starts. A relentless, firing on all cylinders performance, of this troubled boy’s tale. There was no let up for the entire seventy five minutes. It was an impressive feat, to be screamed at for so long. I commend Ryan for giving the performance his all. It became so very tiresome after about half an hour though. There were so few quiet moments to reflect, as the play drove on to its all too predictable conclusion. In summary it was like being slapped in the face repeatedly, with a wet haddock.

I had a chat to myself during the intermission. The ticket was free, so I needed to make use of it. I quelled the urge to go home. As I re-entered, I noticed that the audience for ‘Dark Vanilla Jungle’ was more sparse. Some people clearly had acted on their reservations. Surely this play would be an easier experience than the first? The set (designed by Naomi Faughnan)  was the same as the first– a walled prison corridor that was visually impressive giving a claustrophobic air. Having seen Katie Honan in ‘Murder of crows’ and ‘Let the right one in’ over the past few years, I was expecting good things. Honan is a fine actor.

She plays Andrea – again a troubled London soul. Darkness and tragedy again lie beneath the surface. Again, a relentless, firing on all cylinders performance about this troubled girl’s tale. Kudos to Honan for remembering this script. Delivered at a hundred miles per hour, it was difficult to catch all that was being said because of the dizzying pace, and the difficult to comprehend London accent. There was no let-up with this piece either. Which was problematic as suddenly Andrea would find herself in yet another appalling situation and I’d be scrabbling to remember how she got there. It might well have been explained in a chunk of text I hadn’t had time to process. I could see why these pieces were companion pieces dealing as they deal with the struggle and misery and isolation of tortured souls. The director Karl Shiels must want the audience to experience some of that same torture.

As I staggered out of the theatre at 11pm I was feeling slightly shell-shocked. Big praise to the performers, but I have to question the wisdom of staging both these plays together. Individually they are hard to absorb. Together they are almost impossible. I described ‘Tonight with Donny Stixx’ as being slapped with a fish. Coupled with ‘Dark Vanilla Jungle’ it was like being bludgeoned with an uncooked leg of lamb. For three hours.

I realise that opinions are like arseholes – everyone has one. ‘The Ridleys’ in my opinion was one of the worst nights of theatre I have endured in my life. This is an Abbey Theatre show, so there’s no requirement for a discreet review. It runs until January 26th on the Peacock stage.

2 thoughts on “Theatrical: ‘The Ridleys’ at the Peacock”