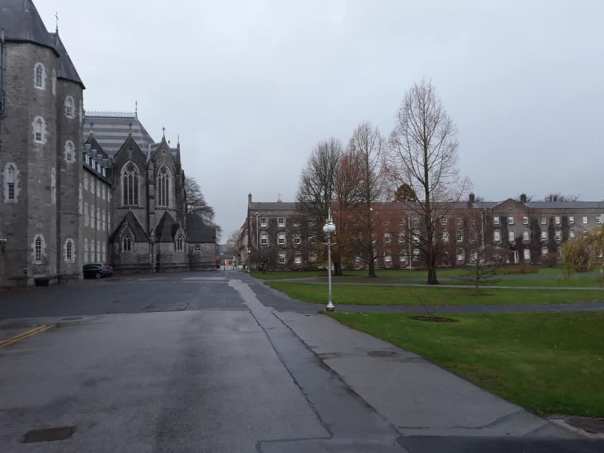 Sunday yawned in front of me. I could have been productive and done some Christmas shopping. That’s what Christmas Eve is for though. I should have done some housework, but I have too much self-respect for that. I needed to do something though. On the spur of the moment I decided that I would go to Connolly Station and board the next train, and travel to whatever destination was on the schedule.

I looked at the departures board. It was 13.36. If I ran I would make it to the 13.39 to Greystones, where I could walk the Greystones to Bray Cliff Walk. While this walk is wonderful, it was raining so I decided against it. That was the same reason for ignoring the train to Howth.

At 14.00 was the train to Maynooth. That would suit me. Maynooth is a university town in County Kildare with a permanent population of 15,000 people and a student population of 12,000. I had never been. It is home to two universities . First is St. Patrick’s College – the older college. This is a seminary where Catholic priests have been trained since the  late 18th century. Maynooth University is the other, far larger and newer university which trains students in more earthly subjects. This only officially separated from St. Patrick’s College in 1997 which makes it Ireland’s newest university.

Obviously it was the seminary that was more interesting – housed as it is, in grand old buildings. I walked past the medieval castle at the gates and got soaked as I approached the quadrangle – the skies open and the rain pelted down on me. Seeking refuge in the ornate old church with the spire, I discovered that it was locked. Typical.

Spotting a shiny wooden door in the main college building, I approached it and entered. Even though this was not part of the church building it smelt religious. Incense had been burned here. On the walls of the gloomy corridor was a series of paintings of sour old men, who looked positively constipated with disapproval. This was the gallery of the catholic cardinals of Ireland. I recognised Cahal Daly with his wizened face, and devil-red gown. Perhaps he was a lovely person in real life, but he gave me the creeps. His appearance struck me as sinister – resembling a  bitter, judgemental, closeted gay man. Perhaps that’s what he was?

I was alone in the corridor. I turned the corner to be faced with another equally long corridor containing more paintings. A grim, atmosphere pervaded. Quite grand in its appearance it nevertheless had the air of a room from where all joy had been banished.

The door on my left was open. I entered and saw a sign for the students’ rooms. That must be a sparsely populated space I thought. Recent reports indicate that there are currently less than 40 men training to be priests in the massive college – the lowest since its foundation in 1795. Some years ago there was a big scandal when it was revealed how popular the gay dating app Grindr was in the college. This was no surprise to me. In the 1990s when I first moved to Dublin I had a friend who was a former seminarian. When I had recovered from my stunned disbelief that he’d spent three years in a seminary (I remember my initial response upon hearing the news had been a stunned ‘Why?’) I had been quite shocked to hear him speak of how the place was as cruisy as the George Bar at closing time.

I didn’t go to the students’ quarters obviously.

I left the building and made my way across to the new university. I never quite made it. The heavens opened again. I dived into a convenient Aldi store for the duration of the shower, and stocked up on tinned mackerel, sardines and haddock for lunch during the week.

Checking my phone I noticed that a train back to Dublin was departing in twenty minutes. I walked back and boarded the train.

The grounds of St. Patrick’s college are vast and green. I will pay a return visit in the summer. It looks like a very pleasant place for a gay first date.