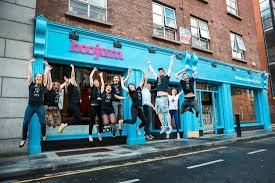 I was working from home today and started to get cabin fever. Instead of sobbing softly over my usual home-made sandwich I decided to splash out for lunch. I glanced quickly over both shoulders as I entered – I didn’t want anyone to see me in the den of iniquity that would be providing my midday sustenance. I was getting a take-out meal at the new Boojum, which recently opened close to my house.

For those folk outside Ireland, Boojum is an Irish owned Mexican fast food takeaway chain. However it is one of those creepy businesses that thinks it is down with the youth, and is chirpy and matey in its advertisements. The type of business that pretends it is not selling you a greasy burrito for lunch. Instead – for example – it would claim to be ‘sharing an experience’ with you. It implies that Boojum is not some profit crazed business, but instead it is your friend. I know that I am a cynic, but I utterly loathe this type of nonsense. What would those cocaine-addled PR hacks and digital marketing executives do were it not for the tomfoolery of businesses like Boojum? Although it does not use the words in its marketing, it is the type of place that would use the word ‘eatery’ or ‘street food’ in its pronouncements.

Despite my irrational hatred of all this dribble, this branch of  Boojum was new to my neighbourhood, and I decided to give it a try. I was curious to see how the staff looked.

Anyone who has ever worked in the hospitality industry knows that it is back-breaking work for precious little reward. Minimum wage and zero hour contracts (those evil documents that state that you must be available to your employer for 40 hours a week, but that they are under no obligation to give you shifts) are fairly standard. Unfortunately there is no database to tell you what companies pay their staff a living wages as opposed to the minimum wage, so you’re sort of snookered when it comes to making an ethical choice where to take your business. For example those vegan twins who run the Happy Pear café in Greystones are all about sustainability and health, yet they never mention their staff’s working and pay conditions when they are grinning in their creepy, sinister manner in their relentless social media updates.

Earlier this year Boojum had received some negative attention when it was revealed that it was company policy to steal staff tips if there was a shortfall in the till at the end of a shift. When news got out about this it created quite a backlash. Could this mean that Boojum was not ‘sound’? (You can get your bottom euro that some PR flunky named Sorcha O’Flatley or Jasper McSliotar) came up with that slogan after a bottomless prosecco lunch held at the HQ of the Lovin’ Dublin website – the mothership of this meaningless PR babble.) Boojum backtracked and stated it would stop stealing staff tips. Instead they MIGHT start stealing it from staff wages, Apparently its workforce is starting to unionise however, meaning it probably is no longer the worst offender in its treatment of its staff.

The queue today was totes ridic – that’s Lovin’ Dublin speak for ‘totally ridiculous’. Clearly the workers Dublin’s financial district are fans of the burrito (burritos and doughnuts are currently the trendiest of foodstuffs, that produce orgasmic – paid – reactions from the typists at Lovin’ Dublin website. I was about to flounce out in a huff but decided that I need to work on my patience. Lovin’ Dublin had repeatedly implored me to ‘DROP EVERYTHING’ for some ‘guac at Booj’ (guacamole at Boojum). I had started so I’d finish. The staff looked exhausted. The burrito bowl I purchased was underwhelming in its mediocrity. I felt slightly soiled.

As Dolly Parton is my witness I will never eat at Boojum again.