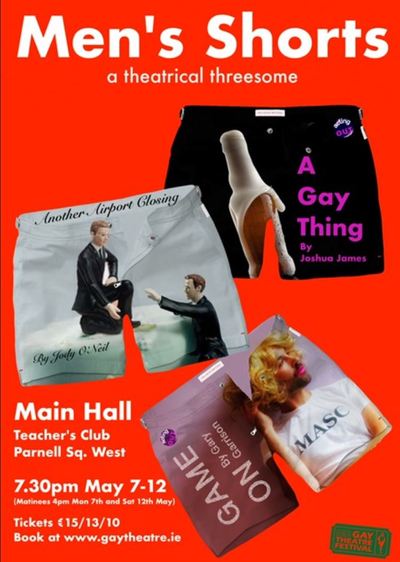 The May bank holiday Monday each year, sees the launch of the International Dublin Gay Theatre Festival. Now in its 15th year, there is a wide range of shows, across a number of city centre theatre venues – there will be something for everyone in the audience. It was at this festival last year that my play ‘An Unexpected Party’ had its debut in Theatre@36 in the Teachers’ Club on Parnell Square. Facebook sends me daily reminders of that amazing week last year, the time when I didn’t see my very own full length play – for the simple reason that I was also starring in it. This may sound boastful, but what of it? If I don’t blow my own trumpet, then no-one else will. As the kids say.

First up was ‘Game On’ by Dublin’s own Acting Out Group – the LGBT theatre company who have had several successes in this festival – most noticeable for me, was the show ‘The Ref’ – a musical comedy about the marriage equality referendum, which I saw a few months after my move back to Ireland.

‘Game On’ by Gary Garrison is about the aftermath of a date – Brian thinks his date with David went really well. However after a thwarted attempt at a goodnight kiss, he discovers that David is looking for a more ‘straight-acting’ boyfriend. Masc4masc as the dating apps might say. Well that’s like a red rag to a bull for our hero Brian. This was an amusing piece and quite timely, given the toxicity  so apparent in online dating profiles, where the pretence of being straight is seen somehow as ‘better’. If there is any criticism of this piece (and this is a reflection on my own personal OCD, rather than the fine performances by David Browne and Paul Clark) it is when one character references his suede shoes, when he was in fact wearing leather shoes. This is my issue I know. I will seek help.

Next up was ‘Another Airport Closing’ – a funny one man show written by and starring Jody O’Neil, about a groom-to-be, waiting at a wedding altar (or whatever the atheist equivalent is) for the other groom to arrive. Is he showing up? Has he been jilted? What will he say to all the guests who have travelled in from the US for the nuptials?

Last but by no means last, it was the return of Browne and Clark from Acting Out again, with the piece ‘A Gay Thing’ written by Joshua James. After an evening of boozing, straight John is wondering aloud to his GBF (gay best friend) Steve, whether he too might be gay. Not that he’s attracted to guys or anything, but unless you’ve done ‘gay things’ then how would you know for certain? This was a hilarious piece, recognisable for its cringe-worthy realism. I could be wrong but I think I may have seen this piece in an Acting Out yuletide showcase called ‘Bollocks to Christmas’ a few years ago. It was very enjoyable.

All in all a very pleasant evening. ‘Men’s Shorts’ is playing at 7.30pm each evening this week until Saturday (with a 4pm matinee on Saturday afternoon). Check it out (along with ‘Ginger Beer’ or any of the programme of shows for the rest of this week or next week. You can buy a ticket on the door or through www.gaytheatre.ie.