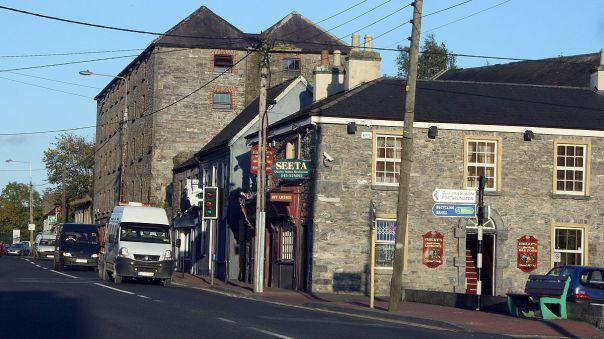 The train was booked for 17.25 – the direct service between Dublin Heuston Station and Limerick Colbert Station. This was a service that did not require a change-over in Limerick Junction – a dreary place in County Tipperary, sometimes referred to (by myself) as ‘the waiting room to hell.’

At lunch, while dining on Thai, green chicken curry (cooked in work canteen style) I got talking to an American colleague from Kildare town. He told me that he was leaving work at 15.00 and that if I wanted a lift to Monasterevin (en route to Limerick) then he would gladly take me. We would arrive in Monasterevin (County Kildare) at 16.15, and my train would collect me at 16.55. A half an hour to explore Kildare’s 11th, and Ireland’s 105th biggest town. Why ever not.

I knew little about the place. Quick research revealed that the poet Gerard Manley Hopkins visited many times over the course of his life, that the River Barrow connects with a canal in the town, which has a pleasant walkway; and that in 2017 an angry mob formed to run a civil servant out of the town. The mob was formed using social media  and claimed to believe that the man was a known paedophile Anthony Luckwill (an older man with different coloured hair). Despite repeated police assurances that it was mistaken identity, the civil servant was chased from a local business into a pub by 30 or so locals. The gardai then rescued him from the locals and sent him back to Dublin.

I bought a HB Brunch ice pop and ate it by the canal side.

I boarded the train and took to my seat. I was travelling on a semi-flexible ticket. A semi-flexible Irish Rail ticket entitles you to travel at the assigned time, or on the previous or following train.  The 17.25 Dublin- Limerick service was the time printed on my ticket. The previous direct train – the 16.25  – was the one I was now ensconced within.

The ferret like jobsworth of a train conductor did not see it like that however. According to him the 17.00 train to Cork was the train on which I was allowed to travel on. When I explained to him that this service required a changeover he looked sorrowful, but that his hand were tied. He was obliged to fine me 25 euro. Although if you only have 11 euros in cash that is all that will be charged. Ticket inspectors don’t have PIN machines.

In a way I was lucky. The woman next to me was also travelling on a ticket valid that day, but outside the restrictions of the semi-flexible ticket. When he tried to fine her, she pretended not to have any cash at all (I had considered claiming this but decided against it). The conductor looked mournful and her that she could stay on the train but that he was confiscating her ticket – meaning that she would need to purchase the return fare for about thirty euros on Sunday. I escaped lightly.

The train remained almost empty throughout the journey.

Later on the train stopped for half and hour because of a signal failure.

I was late home.