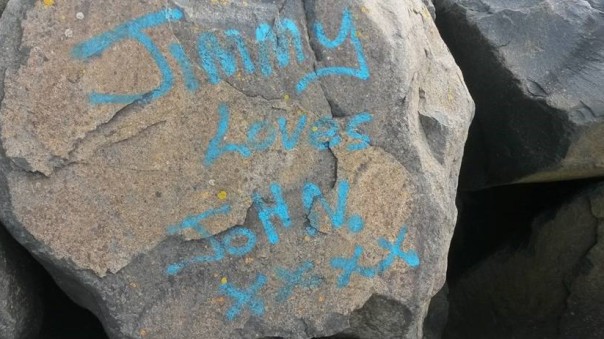 When I moved t Dublin over two years ago, I made a solemn vow to myself to explore the town properly. In a manner that I had neglected to do when I lived here last century.  For a while I was dedicated to this worthwhile task – the Greystones to Bray Walk; the Howth Head Cliff Walk (on new year’s day 2017); Glendalough; Malahide; Glasnevin Cemetery; Dun Laoghaire; Dalkey. All visited and explored.

Then I stopped. It wasn’t a conscious decision. It’s more that I made friends and developed hobbies of the theatrical persuasion. When I woke up this fine spring day I decided that  I needed to rectify matters and start my explorations anew. For today’s entertainment, I would walk out to the Poolbeg Lighthouse on the Great South Wall in Dublin Bay.  I had done this route once previously in August 2016 with some friends. Today I would be a sole traveler.

I’ve written about that adventure HERE so I won’t go into too much detail about today’s trek. Little has changed. It was once again showery. Jimmy still loves John (I kept my eyes peeled for this graffiti on the rocks, which I’d spotted on my previous excursion.) It can be argued that graffiti is vandalism, but in this instance, I just find it lovely and romantic. I wonder who they were/are? I like to think that they were star crossed lovers in 1950s Ireland who took a walk out to the lighthouse some time in the 1950s, to record their love on a rock. The next day they would bid farewell at Dublin Port, as Jimmy set sail for Liverpool, with a promise ringing in his ear that John would join him soon.

The artwork on the wall beside the lighthouse has been changed and now features children’s faces.

I made a point of saying hello to everyone I passed, regardless of whether this made me look insane.

It was a thoroughly bracing, and pleasant afternoon. And in typical Irish style, the heavens opened as I arrived back at Sandymount Beach. Why wouldn’t they? This is Ireland. Taking shelter in a Tesco Express in Ringsend, I bought a bag of macadamia nuts to revive myself before continuing on my way home. Such is the deep glamour of my life.