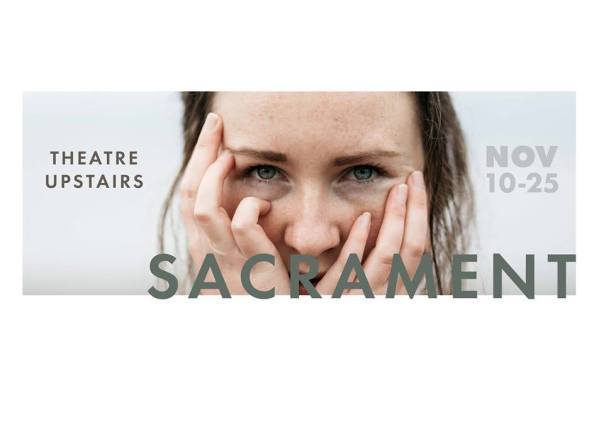 Another Tuesday in November. Another trip to the theatre. After a hiatus of a few months I am back on a roll, when it comes to attending plays. For my delectation this evening was ‘Sacrament’ in Theatre Upstairs.

Produced by the Minerva Collective, this one woman play is written by and stars Leigh Douglas.

The Minerva Collective is a feminist theatre and political collective which uses performance as a platform for social commentary and change. I had heard of this company last year when it produced ‘Waking Beauty’ for the 2016 International Dublin Gay Theatre Festival. I performed front of house duties for that play for a couple of shows during the run (and I have recorded my thoughts about it HERE)

The show starts with Douglas on the stage, dressed in a plain white tunic. She proceeds to tell the tale of the main character ‘Girl’ – from early childhood, as she makes her first confession and communion, surrounded by her loving parents and fierce grandmother. She daydreams of her wedding day, when she will be the most beautiful grown up in the world.

Her catholic faith is as secure as her love for the Spice Girls, at this stage in her life (maybe I am showing my own desperado streak here but my love for Ginger, Sporty, Scary, Posh and Baby remains steadfast and true to this day.)

As she grows up her faith goes through a crisis. She cannot reconcile her belief in God with her emerging sexuality – especially when she travels across the sea to heathen England for university and meets Sophie.

It is a tour de force of a performance. Performed in a stream of consciousness style, the character of ‘Girl’ is manic, hilarious, despairing and fierce. Changing voice and accent to delineate whichever character she is speaking of, it is always clear who she is playing any point. Needless to say the terrifying Irish Granny is the highlight.

It’s a clever but tricky device to use effectively but Douglas does so with aplomb.

The pace is frenetic, so much so that at times I wished she’d pause for a breather.

I was slightly surprised to consider that religion could still be so important a definer for the generation after mine. I thought the youth of today might be post religious.

Perhaps naively I thought that the ease with which I’d abandoned religious belief and belief in ‘god’ would be replicated by every other gay person.

I guess I learned something new tonight.

It was an entertaining, fast paced and engaging piece. Groundbreaking in the sense that it’s quite rare to see a queer coming of age play, told from a female perspective. The male coming out story has been told far more frequently, to the point where I tend to avoid them – jaded old queen that I am.

An interesting and thought provoking piece of work, it runs until Saturday night in Theatre Upstairs on Eden Quay.