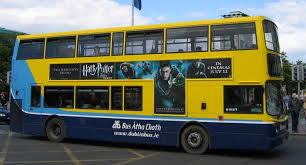 I know that I often moan about my journey to work in the morning, and about how I find it to be lengthy and tiresome. Well that’s my own choice I guess, thanks to my desire to live close to town – even though I work in the industrial wastelands of county Dublin.

That said, it is rare that I make comment on how difficult the job of the bus driver can be. And how they can display an admirable patience in the face of some blatant hostility.

Waiting at Parnell Square this morning I was approached by a gentleman with a glassy stare. He droned ‘Sorry mate, do you have the right time?’ at me.

I glanced at the digital display which has a clock, and told him the time. He thanked me.

He sat down on the step and closed his eyes. The number 40 pulled away. He awoke and started swearing. That was his bus. He approached me again and asked if the 40D went via the Cappagh Road through Finglas. I replied in the affirmative. This is my daily bus after all. I know every stop, to a certain point on that route.

We boarded the approaching 40D. It was 8.45am I checked in with my Leap Card and sat in my usual downstairs seat. The hollow eyed gent paid his fare with cash, and made his way upstairs.

I closed my eyes for my snooze.

About ten minutes into the journey, the driver makes an announcement over the tannoy.

‘Could the gentleman in the rear seat, upstairs on the bus, please make his way downstairs to disembark. Smoking is prohibited on this bus.’

I had no way of knowing for sure who this gentleman, the driver was referring to actually was.  I just knew it was the guy I’d spoken to at Parnell Square though. He had possessed that ferret-like, shifty-eyed look of an on-board smoker. The kind of guy who believes that a ‘no smoking’ sign means ‘no heroin smoking’, if you will.

Lo and behold. It was him.

The driver told him that he needed to get off the bus. Our hero argued in reply. He pointed out that he had paid his fair. This was true.

The driver – quite reasonably – responded that a ticket, entitled you to a journey, not to smoke and pollute the air for everyone else. And that smoking was specifically forbidden, as indicated by all the signs on the bus. He told the guy to get off, or he would call the guards for assistance.

The smoker sidled backwards on the bus. The driver called the control office, to advise them that there was a troublesome passenger on board but that he would allow him to stay on board to Finglas Village.

This enraged our cruelly abused passenger who started howling his anger that he was a paying passenger, and that he’d apologised for smoking (he hadn’t).

He raised his voice to vent his rage. I was the closest passenger to him on the lower deck. Perhaps he remembered me from earlier in the journey.

I should have done what all other passengers on the bus were doing, and stared intently at my phone. I was mesmerised however. Such drama so early in the morning.

His eyes fixed on mine. and he bellowed ‘You grass. You speccy four-eyed BOLLIX’.

I was quite shocked. The last time I was called a speccy-four-eyed bollix was in secondary school.

I decided not to engage, and pulled out my phone and started playing Sudoku feverishly.

Our downtrodden hero turned his attention back to the driver to protest that he would not be getting off in the village. He had paid for his ticket. And he had rights.

He loudly explained that as well as rights, he was an addict, and had an appointment to collect his methadone prescription at 9am on the Cappagh Road. And that he was late. And that his brother was a Dublin Bus driver. And that he knew what type of bollocksology the driver was engaged in. And he was going to ‘get’ the driver.

The bloviating rage was palpable. It was all extremely uncomfortable. He continued to refuse to disembark.

In Finglas Village, three Garda cars were parked close to the bus stop. Coincidentally I think. The driver beckoned a guard and explained the situation. The guard looked resigned and roared at our tormentor.

He removed himself from the vehicle fairly sharpish.

The entire bus breathed a sigh of relief.

He was probably no danger, but you never can really tell when confronted with such a dose of self-pity, rage and aggression.

Big respect to that Dublin bus driver – he kept his cool in a tense situation.

I am still a bit traumatised.

2 thoughts on “The hero of Dublin Bus – and the speccy-four-eyed b*ll*x.”