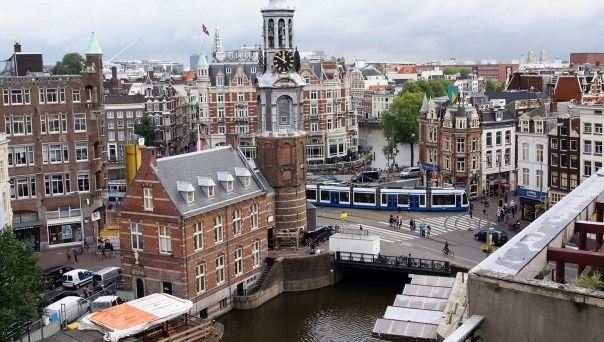 I arrived back from Amsterdam late last night, after an action packed weekend of fun and frolics and friends.

I miss Amsterdam incredibly. It is such a beautiful town, so full of lovely people (well my friends live there), and a full agenda of things to do.

Leaving nostalgia out of the equation, I know that I left for a reason – the main one being cabin fever. In a city that I’d moved to  temporarily – for one solitary year – after fifteen years it was time for a change. Not because I hated the place or had any extreme reason for wishing to leave. More to do with the hands of time.

If I stayed then I’d never leave.

As my age starts to encroach on my employment possibilities (or at least my ideas about my employment prospects) I knew that I still had a window in which to start a new life from scratch in a new town – Dublin – without too many obstacles. Had I waited another ten years however the story might be different. Employers pay lip service to the idea that they do not discriminate based on age. But we all know the reality. I rationalised to myself that if my return to Ireland was a disaster, then at least I was still young enough to potentially relocate out of Dublin again (back to Amsterdam or elsewhere) without having irreparably damaged my prospects.

If I had stayed in Amsterdam then I’d always have had the idea that I didn’t belong there, that I belonged in Ireland.

If I spend two years in Ireland, at least I can say I’ve made a proper, full-on attempt at living in the motherland. If I find myself back in the Dam (or elsewhere)  I’ll know what the rollercoaster involves.

The hold that Amsterdam pretended to have on me seems to be loosening. The hold was fake in the first place of course – it was more a sense of homesickness caused by the out of body sensation that moving back to Ireland had caused. I couldn’t get out of it fast enough. Only after I had left did I miss it so much.

‘What have you done?’

‘Are you out of your mind?’

‘What a complete fucking moron you are.’

Those are just some of the regular thoughts that I had when I initially returned. They are not a reflection on Ireland or Dublin. They were, I suspect, a slightly deranged personal reaction to a major life change.

Now that I am more acclimatised to Ireland the reactions I feel to situations are becoming less extreme. Every action is not accompanied by a ‘You made the biggest mistake of your life coming back here’ reaction.

I very rarely vocalised those doubts that I’d had- nobody wants to hear a returning emigrant whining about how he misses the abandoned homeland. That’s just irritating and provokes the unanswerable question ‘Well why did you come back then?’ . And that is a multi-faceted and incredibly complex question.

By this time next year, when I have been in Dublin town for two years, I expect that I will be capable of almost rational thoughts. And if at that point I decide that I want to live in Amsterdam, then at least that decision will have been informed by a reasoned, somewhat neutral decision making process.

I wonder where I’d end up. Probably Limerick.