With this blog I may be revealing just a touch too much about my OCD tendencies. So be it. Sometimes it’s better out than in.

There is an Irish ‘lifestyle’ website called http://www.lovindublin.com. It styles itself as a guide to young, hip urban living in the city of Dublin. In my view it is symptomatic of something wrong with the world – the crass stupidity of a certain segment of society.  It’s the website equivalent of people who queue for twelve hours for a new iPhone. This phone will do something better than the previous version – although what exactly? Maybe a nerd can explain? It embodies what was rotten about Ireland at the end of the Celtic Tiger – crass, vulgar, stupid, empty, expensive in price but very cheap in taste.

For a start it’s the appalling style of writing. The very title is an insult. ‘Lovin’ Dublin’?
Sorry that’s a spelling mistake right there. Although I suppose the cute little diminutive might sound funky to someone low on a few brain cells.

Then there are the restaurant and food reviews. To summarise these is rather easy.

1. Food made in a quality inspected kitchen in Ireland is NOT restaurant food according to this website. Here it is routinely described as ‘street food’. As if some brave little stall holder just cooked it up in front of us. We are not in Vietnam or Thailand you know. This is not street food. 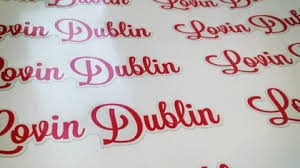 2.Restaurants are described as ‘eateries’. Don’t the morons who write for that there website know how appalling this descriptor it? Restaurant, café, deli, chipper, take-away. The list of words to describe these food locations is endless. Yet the horrid word ‘eatery’ is imposed on these poor restaurants by the bimbos and himbos who type for this rag. Don’t they know the damage they are causing to these poor innocent restaurants’ reputation?

4. Speaking of Mexican food – the orgasmic manner in which the Boojum chain of take-away burritos is described (on average about four times a week – in different articles) is proof either that this website is accepting advertising money, but pretending not to; or that the writers never venture to check new places and just recycle and regurgitate the same dribble, ad nauseum.  (see also Bunsen Burger, Wow Burger and 5 Guys). If you are to believe this website there is a very limited selection of places to go out in Dublin. Because they keep going to the same places over and over again. It’s like being slapped about the face repeatedly with a wet haddock, reading this shite.

5. I don’t feel warm and fuzzy when I hear food described as ‘yummy’ or ‘delish’ or ‘totes delish’ or ‘to DIE for’. And no I’m not going to DROP WHAT I’M DOING RIGHT NOW.  If one of their typists thinks a Boojum Burrito (or a Bunsen Burger) is ‘food porny’ then it doesn’t encourage me to eat there. It does however make me wonder about the sanity of the writer. Is their grip on reality somewhat tenuous? Who APPROVED that drivel for publication?

Who reads this shite (apart from me?). Who enjoys it? I mean really.

Then there are all the ZANY, CRAZY, FUNKY articles about the correct way to pronounce districts – I kid you not but there is an article up at present on how pronounce ‘Ranelagh’- meanwhile everyone knows the correct pronunciation is ‘Soft Dublin bastard’. Or where to go for cheeky, delish, after work pints on Monday, following your guac infused Boojum burrito. OH MY GOD!!!!!!!!!!!

Is the readership a bit lacking in gumption? To the point that it needs the advice of these airheads to make these type of decisions?

I am aware that I am over-reacting. That it might be advisable to sit in a darkened room in the foetal position, rocking gently for a few hours listening to Enya or whale music on a low volume.

In fact it’s one of the first I go to when I arrive at work in the morning.

An early dose of vinegar sets me up for the day. And if nothing else it teaches me the places to avoid in our nation’s great capital.