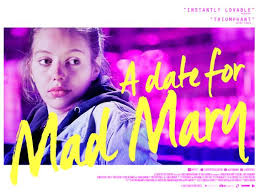 Another evening, another cinema trip. Another Irish film.

I’m on a bit of a roll when it comes to Irish cinema this year. Or to put it more accurately, the Irish film industry seems to be undergoing some sort of renaissance at the present time. In 2016 so far, I have seen ‘Sing Street’ – the coming of age tale, set in the 1980s. of a 15 year old Dublin boy who tries to get the girl by joining a band (read all about it HERE).

Earlier in the year I saw the 20th anniversary re-release of ‘Michael Collins’; as well as the Irish Film Board co-production of bleak Australian outback thriller ‘Strangerland’ starring Nicole Kidman and Joseph Fiennes.

For my visual delectation on Tuesday was ‘A date for Mad Mary’.

And quite the triumph it was as well.

‘Mad’ Mary McArdle has just been released from Mountjoy Prison after serving her sentence for violent assault. She is back in Drogheda with her mother and her racist Nan (‘There’s a crowd of Polish moved in next door’). Her best friend Charlene is frantically preparing for her upcoming wedding, at which Mary will be bridesmaid. However Mary’s ‘plus one’ invitation has been revoked as Charlene assumes that three weeks is too soon to find a suitable date.

Mary proceeds to go on a serious of disastrous first dates in an attempt to prove her best friend wrong. All the while ignoring the reality that Charlene has moved on with her life while Mary was banged up, and is slowly freezing her out of her life.

Then Mary meets Jess and rapidly the two women fall for each other.

It’s a lovely little film. While it is set in Drogheda, it could really be set anywhere. There’s nothing especially Irish about the story (so often in Irish films the country is a silent character lurking malevolently, in the corner). The performances by Mary and Charlene (in particular) are beautiful. Very natural and realistic and moving.

Charleigh Bailey plays Charlene and is my favourite character in the film. Not a sympathetic character by any means, she portrays her frustration at Mary’s situation in a very believable manner.

While one could interpret Mary’s unresolved anger and rage as a metaphor for her life in the closet,  the film doesn’t whack you over the head with that interpretation.

I related to that story I guess.

When friendship dies often it is not because of some huge bust up or crisis. It is more to do with distance or.changed circumstances. You don’t want what seems like a lifelong bond to end but sometimes it is inevitable. Even the strongest of friendships can be fragile when left neglected or untende. When one person gets a new job, a new qualification, a new address, or simply makes progress in some direction,. while the other person doesn’t, it can prove to be the death knell for the close connection that once existed. You don’t want it to happen. They don’t want it to happen. But one day you wake up and realise that while you have no bad feeling towards that person, the connection is gone. Dissipated. Vanished

It’s happened to all of us. And it can be heart-breaking.

‘A date for Mad Mary’ is one of my favourite films this year.