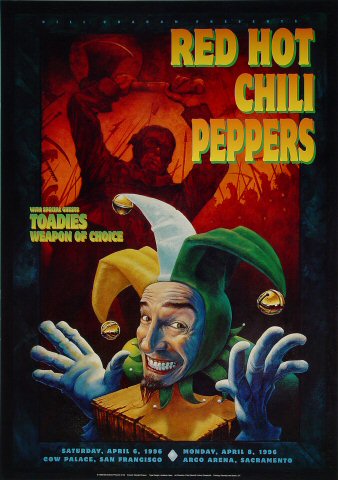 Last week it was announced, that the popular music combo ‘Red Hot Chili Peppers’ were playing a gig in the Point Depot near my house on December 20th. Being a creature that grew up in the 80s and 90s, this was thrilling news. Not only was their music gripping to my teenaged soul, I also had strong feelings for the lead singer Anthony Kiedis.

So the plan was to be ready with my credit card, to book my ticket at 9am.

No such luck – it slipped my mind, and when I eventually remembered at 9.15am, the gig was already ‘sold out’ (meaning simply, that it is being claimed by promoters that it is sold out – meanwhile thousands of tickets are already on sale for multiple times the face value on touting websites like StubHub – which incidentally is owned by Ticketmaster). By some coincidence if the overpriced tickets on the touting websites are not sold, then they will magically reappear on the regular websites for face value closer to the date. Funny that.

Concert ticket sales seem totally unregulated and mafia-like in their business models. This has nothing to do with the Peppers themselves – they are no different from any other act which plays live, in this regard.

But what was this – magically, as I was about to close my browser, a second date – on December 21st – was announced, and on sale. Like a hot snot, I was on that website and I secured myself a pair of tickets. My teenage romance with the drug addled impresario of the Red Hot Chili Peppers can resume, a quarter century after he broke my heart, by cheating on me with heroin.

Feeling all psyched up with anticipation, I got to thinking. About my first live music gig in Amsterdam, a few weeks after my arrival in the city under the sea in the year 2000.

I didn’t know a soul, when I moved there. And work was putting me up in a hotel for a few weeks until I sourced a room of my own.

Weekends during those first few weeks in Amsterdam were pretty horrific. As the clock approached five on the Friday afternoon, I knew that except for the staff behind the checkout in whatever shop I went into, it was unlikely that I’d have any human contact until Monday. This was in late November. It was dark at 5pm. It hardly made a very auspicious start to my adventures in Amsterdam. It was soul crushingly miserable and depressing.

Until the Friday of my third week, a colleague from Cork, was passing by my desk. She stopped and said ‘A few of us are going to the Last Waterhole in the Red Light District tonight to see a band. Would you like to join us?’

I could have kissed her.

The band that was playing that evening (for 5 guilders entrance fee) was a covers band called ‘Red Hot Chili Bastards’. You will never guess whose oeuvre they played.

The Last Waterhole was a dingy, live music dive bar on Nieuwebrugsteeg on the edge of the Red Light District (it has since relocated to Leidseplein where nowadays. it is a ritzy live music bar for tourists, which pretends to be a grungy, underground hovel like the original place was. The original has reopened as a Korean karaoke bar called The End – which retains some of the last chance saloon atmosphere of its predecessor).

I remember the thick fug of cigarette and marijuana smoke as I entered the place. White people wearing dreadlocks like they were going out of fashion. Graffiti covered the walls. Facial tattoos were being sported on the bar staff, when this was still a thing you’d notice.  The coins were piled up on the pool table as hippies waited to unleash their competitive streak. The beer was flowing. And in the corner on the modest stage the support act was playing.

I remember it being one of my favourite gigs of my early Amsterdam years – partly because I loved the music, but mainly because I was out with a group of people for the first time since I’d arrived. Maybe I’d make some friends after all?

I have never seen the original band play. But Anthony and Flea and the boys have a lot to live up to.