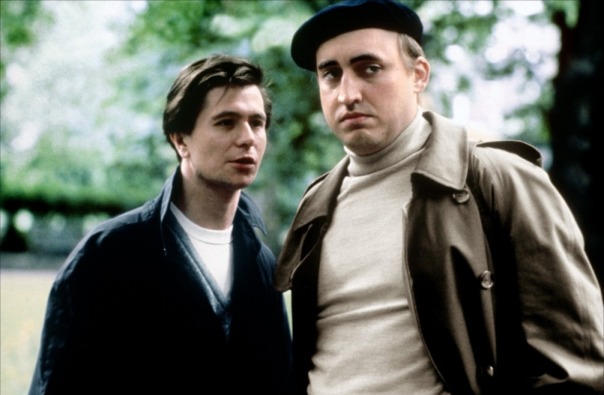 A nifty way to catch full length films on Youtube is to use Google Translate to find out the Spanish translation of the film title that you want to watch.  The film companies don’t seem to check these as much, so they are available for longer. Free and online.

This evening I saw ‘Susurros en tus oidos’, which is the Spanish language title of the 1987 English film ‘Prick up your ears’ – the biopic of famed English playwright Joe Orton, who in 1967 was bludgeoned to death with a hammer, by his long-term lover Kenneth Halliwell. So far, so grim.

Some years ago I read the book, of the same title, by John Lahr, on which the film is based. That was an interesting book, which remained in Amsterdam when I did the purge of my library, before I came home. Its present location is unknown – I hope I found it a happy home, and it didn’t end up in the unloved pile, which ended up in the paper recycling bin, as I was trying to rehouse any books that couldn’t come home with me.

It’s a rare occurrence I know, but very occasionally the film that is based on the book, is better than the source material. The most immediate examples that come to mind are ‘Silence of the lambs’ and ‘One flew over the cuckoo’s nest’. This film joins their esteemed company. Sometimes the camera tells a story in a clearer manner than the written word. When I read this book, I hadn’t read any of Orton’s plays, so the lengthy analysis of his work, contained in the book went over my head.

The film stars Gary Oldman, Alfred Molina and Vanessa Redgrave. It tells the tale of the life of Joe Orton (Oldman) from his humble beginnings in Leicester. At the age of eighteen he goes to drama school where he meets aspiring writer and actor Kenneth Halliwell, who looks old before his time, but has dreams of greatness. They move into a crumby room in Islington, where they spend the rest of their lives.

For ten years they live lives of abject failure – unsuccessful at both writing and acting. After being sentenced to six months imprisonment for defacing library books, they stop collaborating, and Orton starts writing solo, to almost instant success.

After initially writing a mediocre BBC radio drama, Orton meets his agent Peggy Ramsey (Redgrave), who encourages him to start writing for the stage. Success is instant. ‘Entertaining Mr Sloane’ and ‘Loot’ and ‘What the butler saw’ are the talk of the town – award winners and box office hits all. Orton is in his element – accepting a commission to write the screenplay for a new Beatles film. And celebrating by having sex with countless men in the cottages of London (cottages being public lavatories, popular as meeting points for gay men in the dark times, when homosexuality was punishable by jail. In fact if you read the film title again the double entendre becomes apparent.)

Meanwhile balding Halliwell is seething with jealousy and resentment in their grimy room, adjusting his cheap wig feverishly. In his mind, he is the writer. He has taught Orton all he knew. But he is unacknowledged. Posing as Orton’s secretary he is ignored and disregarded by the leading lights of 1960s London. He spirals downward – growing increasingly irrational, popping pills as his grip on reality grows ever more tenuous.

Shortly after a holiday in Morocco, the hammer appears. Orton is dead. And Halliwell reaches for the bottle of pills. The rest is history.

In their tiny, sordid flat, their corpses were discovered.

Both the leads are incredible, with Molina in particular giving a heartbreaking portrayal of a thwarted life. At a time – in the very recent past -where acknowledging your true nature was guaranteed to destroy your career and reputation, Molina’s performance is one of rage and impotence. Rage at the fact that he remains unknown but cannot enjoy Orton’s success as he must remain a dirty secret.

The glaring irony being however that due to their gruesome end, their names are forever intertwined, with any discussion of Orton impossible without reference to how, and by whom he met his end.

It is a wonderful film.