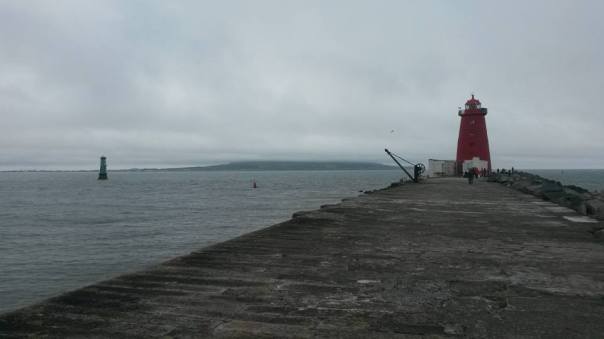 My friend got in touch and asked if I’d be interested in taking a walk to the Poolbeg Lighthouse in Dublin Port on the bank holiday Monday afternoon. Being a glutton for new experiences, I happily agreed. After some cursory research I was confused. Google Maps told me that the lighthouse was in the middle of the sea. How would it be reached? I didn’t ponder the question, and set off to meet my friend at the prearranged time.

It was a bracing October day – despite being the first of August. It was overcast and in typical Irish style it wasn’t quite raining, but there was this soggy, penetrating mist in the air, as well as a gusty breeze. It reminded me of family day trips to Ballybunion beach in the 1980s, where we’d set off with glorious optimism and a picnic, only to spend the day in the car, waiting for the sun to disrupt the drizzle, and not enjoying the packed lunch because it was missing the essential seaside sandwich ingredient – sand.

We planned to approach the lighthouse through Sandymount Strand, via Irishtown. Despite being very close to the city centre and the port, the atmosphere seemed different – like being in the heart of the countryside. Not a house to be seen.

It seems to be a specifically Dublin thing but the beaches are basically mudlands, with the sea barely visible from the shoreline when the tide is out, so vast are these squelchy mudlands. They are quite beautiful but wellies would be recommended if you planned to walk out to paddle – apparently the tide comes in fast, so you need to time your walk if you want to avoid being steamrollered by the incoming sea.

When the lighthouse appeared on the horizon it became evident that while it is located in the middle of the sea, it can be reached by a four metre wide seawall, jutting out into the water.

The mist kept up its drizzly onslaught and we inched our way out -I took care not to stand too close to the edge of the wall, as there is no barrier separating the walkway from the deep blue sea. Watching an enormous sea-liner, sailing into Dublin Port (from Wales I imagine) was impressive.

Reaching the lighthouse after the twenty minute walk along the seawall, we had a glorious view of both Howth Head and Dun Laoghaire.

Walking back we started reminiscing about TV adverts from our childhood. Those were different times. I don’t think that public service adverts that scream ‘Rabies Kills. Agonisingly!!!’ exist any more (the purpose of that ad was to warn people to leave their family pets at home, if they planned to go out on holiday to some foreign land with their dubious foreign ways.)

I’ve not seen any publicity for cattle feed on television for many years. Back in the 1980s I recall adverts for Triple A Golden Maverick. ‘A for Acidified, A for Accelerated Growth.’ It sounds like those poor cows were being fed steroids.

And the incredibly sinister radio adverts for the Wireless for the Blind (‘Think of the blind. Think of their courage in a world of darkness…’)

Making our way back to the shore, the heavens opened. We ran to the nearest chipper, where I had a healthy meal of battered sausage, chips smothered in litres of a vinegar, washed down with a refreshing mug of Barry’s Scald. After our three hour walk, it seemed only right.