I am just in the door from the matinee performance – on the last day of the run – of ‘Town is dead’, which was shown on the Peacock Stage of the Abbey Theatre – the national theatre of Ireland, darling. 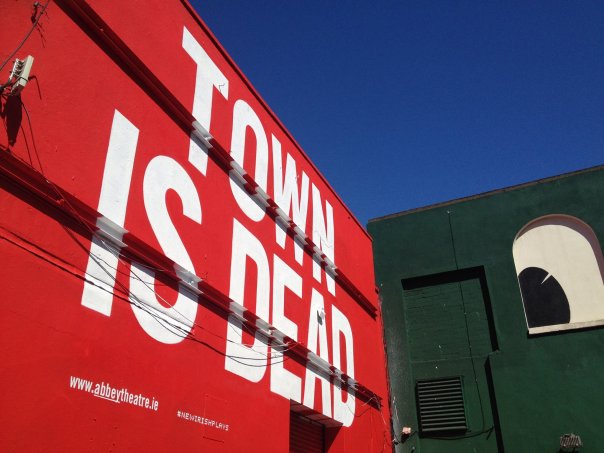 I had seen the huge mural of the play title on a wall in Smithfield and it had grabbed my attention. It went into my mental notebook of events that I wanted to see. Often time when something gets slotted into this psychic notebook, by the time I get round to booking a ticket, I discover that I have missed the boat.

Well yesterday, during a quiet moment at work I googled the play. Shock, horror, today was the last date. I checked ticket availability and there was one seat left. I pounced on it like a hot snot, and booked.
This afternoon  I toddled the ten minute walk to the venue. I didn’t know what to expect. I booked the ticket because I liked the mural in Smithfield and based on the title of the writer’s previous play – ‘Alice in Funderland’ which I’ve always regarded as one of the best play titles ever.

‘Town is dead’ is set in an north inner city Dublin flat – kind of like the ones I am looking at right now from my living room window, as I write this. The building is being demolished to be replaced by a shiny, glass office building – kind of like the ones I see from my kitchen window. Ellen is an elderly woman who thought she was going to end her days in this flat. Instead she is packing her belongings in preparation for her move to a box room in her snooty sister’s house in Lucan.

She is kept company by her heavily pregnant upstairs neighbour and an unnamed young man – her grandson? A mysterious visitor from England arrives with news from Ellen’s past life in Birmingham where she had lived for twenty years. She is forced to delve into her past and face  the unresolved stories from her time abroad.

It is an absolutely stunning play. Actually it is a play within a musical in that there is a full score and much of the story is told through song – not in a cheesy musical style manner, but in that singing/speaking style that I adopt if I am ever unlucky enough to be required to sing onstage – the last time being when I played Riff Raff in ‘The Rocky Horror Picture Show’.

The performances by the four characters are all strong – particularly Barbara Brennan who plays Ellen in that uniquely Dublin foul-mouthed manner. The script is very tight – it is both hilarious and heartbreaking with the tragic lives of the characters not being played for laughs, but the manner in which the lines are delivered in that Dublin manner, are piss-your-pants funny.

Particularly touching to me were Ellen’s reactions to coming back to Ireland after years away and feeling like an alien parachuted into a supposedly recognizable, but completely strange environment. I’ve been there love.

It’s too funny to be a tragedy, too tragic to be a comedy, too musical to be a straight play. It’s just this wonderful, magical, gorgeous play. I’d tell you to go see it, but it finishes today. If it goes on tour or comes back, then I’ll come with you.

Last night I spent a fiver to see a short play called ‘Love me Tinder’ in the International Bar.

I mentioned earlier in the week about my unexpected encounter with Flatenemy on the bus. Thankfully he didn’t see me. Last night I was not so lucky. As I was standing on the street for the doors to open he swaggered by me. Our eyes locked. He paused for a milli-second, looked like he was about to say hello. I took the mature approach, averted my eyes and started babbling hysterically to my companions. Always keep it classy Murphy.

Upstairs at the International Bar is a tiny venue. And it was packed. The play was thirty minutes. I had read it previously when we were trying to decide on a production for this summer. We had wanted this piece but were unable to obtain it, as the writer had done a deal with this venue instead I imagine? It’s a story of a Canadian guy visiting Ireland who is waiting on his Tinder date to arrive. When she does he attempts to be all suave and sophisticated as he tries to lure her into his leaba. At the same time his internal monologue is ongoing – the actress freezing as he gives voice to his inner thoughts. It’s a clever idea, and a fun play. Very entertaining.

All in all a very cultural weekend so far. I must go bush-drinking with a flagon of YellowPack cider later to lower my tone again.