Last night I went to see ‘Absolutely Fabulous’ in the Cineworld on Parnell Street. The ticket cost 7.90 Euro. Which was a pleasant surprise, as every other time I have been to that cinema, in recent months the price for entry has been 12.50Euro. Must be an early-in-the-week price. 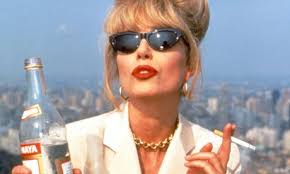 The film was fine. An entirely predictable 6/10. The whole premise of the show has been stretched to snapping point. The adventures of vacant, shallow, alcoholic PR executives and fashion editors, are not really suitable if you are looking for an exploration on the meaning of life. But as a light hearted, fun filled doughnut of a film it worked just fine.

Edina Monsoon – PR person extraordinaire – is broke. Her 2016 client list extends only to Emma Bunton and Lulu – both of whom want to fire her. Her credit cards are being rejected at Harvey Nick’s. The car service has dumped her as a client, and the Bollinger shop has stopped taking her calls. Even worse her ex husbands have stopped paying her mortgage. And her autobiography – ‘A Fabulous Life’ – which has been ghost written by her personal assistant Bubble has been rejected as ‘absolute shit’ by every publishing house in London.

Help is on the way however. On her yearly visit to the office Eddie’s best friend, fashion editor Patsy Stone hears that international supermodel Kate Moss has fired her PR team. An opportunity for a triumphant return for La Monsoon?

At a career retrospective for fashion designer Huki Muki (played by Janette Krankie) Edina spots Kate having a fag outside. She dives for her. Moss plunges into the Thames – apparently to her watery death. Monsoon is charged with manslaughter.

Shenanigans ensue as Patsy and Eddie escape to the south of France, pursued by the fuzz, and the hatred of fashion world.

There are cameos by the dozen, from Graham Norton – ‘I hate that Monsoon woman’- to Rebel Wilson (as a budget airline flight attendant), to Dame Edna to Joan Collins to Jean Paul Gaultier. And these are overdone – although I suppose it’s a sign of the goodwill felt towards the original series  (the first three seasons of which I owned on VHS video tape – that’s how butch I was.)

It’s completely silly and over the top. The plot is wafer thin. And the acting is rather ropey.

Then again I wasn’t expecting Chekhov. It did exactly what it said on the tin.

The audience comprised of groups of women and an occasional gaggle of gays. The audience was bereft of heterosexual males. Funny that.

All in all quite a satisfying film. When expectations are low (and after the abomination that was season five of this show, that’s exactly what they were) you’re unlikely to be disappointed.