I had plans for this Easter Saturday. Having arrived home on Good Friday I woke this morning feeling as fresh as a spring daisy. I had plans. I was going to be a tourist in my home town. My initial inclination was to do the river walk from the city centre to the university. But as the sky was in a spitty mood and because I didn’t have an umbrella, I decided that indoors was a safer bet. King John’s Castle on King’s Island – beside the Shannon River – would instead be my first port of call.

This is one of the best preserved Norman castles in Europe. Built on the orders of King John in the year 1212 (John was son of one of the earlier English Henrys – he never actually visited the castle named after him) the castle consists of towers and walls, courtyard and fortifications. It is built on the site of an earlier Viking settlement, and was the site of the famous siege of Limerick in 1642. It remained as a British barracks until independence when it fell into dereliction. To ease the housing problem a council estate was built in the castle grounds in 1933 – which I remember, the housing estate I mean, not its construction. The houses were demolished in the 1990s. During the excavations, archaeologists discovered a network of tunnels beneath the castle built during the siege. One of these is now on display.

I was quite besotted when I saw the picture of famed Limerick nobleman Patrick Sarsfield (he has a bridge and a street named after him, you know.). His locks were flowing, and his stance was fierce. I guess he was of the Mariah Carey school of thought – only showing his best side. The limp wrist on the proffered, metal clad derriere made me want to snap my fingers and shout ‘GURL.’ I refrained.

It’s a wonderfully atmospheric castle – with interactive displays and lovingly restored courtyards. I would very much like to attend one of concerts that now get held each year in the grounds.

Making my way up Nicholas Street towards St Mary’s Cathedral – my next destination I felt a bit annoyed. This is the medieval quarter of Limerick with narrow, winding streets. Why hasn’t this part of town been properly developed as a heritage and historical quarter? I wouldn’t wish it to become a Limerick version of Temple Bar, but the potential here is enormous. Between the castle and the cathedral is the perfect spot for some cafes, and antique shops and bars. As a city Limerick is a lot older and more beautiful than Galway (which I love) but in a tourist sense it is only a stopover between Cork and Galway. Even though it has this underdeveloped gem right in the heart of town, by the banks of the Shannon. Unrealised potential in spades.

St Mary’s Cathedral is the oldest building in Limerick – older even than the castle – at 900 years old. It’s still active as a church but is also open to the public. It is suggested that you make a voluntary contribution of four euros to enter. Which is an absolute bargain – although it’s more of a compulsory rather than a discretionary donation. The very pleasant women at the front desk told me which was the best route to see the sights.

For a protestant church it’s very kitsch and catholic in style – with sweeping arches and stained glass windows. Like most of the oldest, most ornate churches in Ireland it belongs to the protestant church. This is due largely to the fact that these edifices were confiscated and refashioned when catholicism was banned. This church is grandiose. One of the oldest and most beautiful churches I have been in. I was the only visitor.

Sort it out Limerick City Council.

I crossed the metal bridge behind the Potato Market (which is now tragically a car park) and made my way to the Hunt Museum – this houses the collection of the Hunt Family – a couple who were antique dealers collectors of medieval art. Upon the death of Mrs. Hunt she gifted the collection to the city. It has an interesting layout because new pieces by living artists are placed and are for sale among the older permanent collection. It gave the place an eclectic appeal.

After my spell at the museum I hobbled over to the Milk Market – Limerick’s very own indoor, outdoor market – for lunch. A rectangular awning has been raised above the market stalls meaning the place has a proper, outdoor market atmosphere, but is immune to the vagaries of the Irish weather, Unfortunately I had left it too late – the stallholders were closing up for the day. I guess morning time is the most appropriate time. I’ve been here previously but always earlier. I’ll know better next time.

Instead I went to Chez Le Fab in the Arthur’s Quay Park. This is a dog-friendly cafe/winebar/vintage clothing/record store. It feels vaguely hipsterish. But seeing as I am a person with notions, this suited me perfectly. I had a bacon and cheese bagel which hit the spot perfectly after my historical exertions. I marvelled at the fashion choice on the small dog named Pixie at the table in front of me. A pink and orange blend of overcoat is certainly a brave couture ensemble for a canine.

I crossed the town to the Limerick Gallery of Art. I was in luck. Today was the last exhibition day for ‘Buzz and Hum’ by Richard Gorman and Samuel Walsh. I try to visit this gallery each time I am home – the displays are ever changing and you’ll often find something interesting. I very much enjoyed the paintings, and as usual when I read the brochure about the pieces, they made not one iota of sense to me. Never mind. Artspeak is not for the hoi polloi. 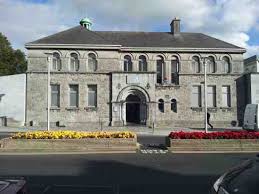 I had intended to have a wander around the People’s Park behind the gallery, but the weather informed me that I’d had enough culture for one day.

I made my excuses to Limerick City, and I caught the number 302 bus home.

Why am I contemplating moving back to Amsterdam?
Because when Limerick feels like displaying its feathers it is a rather splendid town.

4 thoughts on “Limerick gets medieval on me”