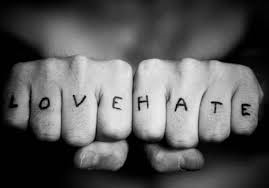 There is a gentleman on my bus to work each day, whose left arm is a tattoo sleeve. His entire arm from the wrist to the shoulder is covered in body art.  His right arm still has some unadorned skin visible but this area is rapidly shrinking. He has some permanent paintings etched onto his neck also.

He’s quite a thoughtful person. I appreciate the fact that he gets on the bus in the morning and sits, sullenly sulking the whole way to work. And not a sound does he make. This is a travel companion far preferable to those, who think that it is not cruel and unusual behaviour to have a loud conversation – either on the phone or in person – at that rancid, early hour. He is streets ahead of those mouth-breathers who spend their journey to work tapping away at their phones, but who don’t have the gumption put the keypad on silent. These bovine passengers don’t seem to realise that there is no need for sound effects. They are not going to miss a single message; as they never avert their eyes from the little screen. The relentless beep, beep drives me to distraction.

Although maybe that is simply because I am like a demon with toothache in the morning.

Anyway back to the tattooed fellow traveller. I have no idea what his name is. He is South American. He is reasonably attractive, and his tattoos are clearly well designed, and lovingly drawn onto  his flesh.

And they are utterly bland, boring and mainstream looking.

I can remember a time in the recent past where a tattoo was a sign of rebellion. A statement that either you’d been in prison, sailed the seven seas, or were genuinely a hard-faced badass rebel.

When I was in primary school one of my schoolmates’ fathers had an anchor tattoo on his forearm (like Popeye the Sailor) and this was a pass-remarkable thing.

Them somewhere in the 1990s tattoos started to edge into mainstream consciousness a bit more. First through the rock stars. Rock stars have always lived on the edge so having body art was inevitable. And where rock-stars go, their fans follow. With the event of the internet, we had instant immediate access to the styles of the singers – rather that a twice yearly appearance on Top of the Pops, or an occasional Smash Hits! interview

And tattoos became quite an cool and edgy thing, that stated that you were slightly off centre – but hadn’t necessarily spent time behind bars.

I got a tattoo on my shoulder in 2000 – the tail-end of the rebellious stage of the tattoo era. I had just moved to Amsterdam. I wanted to mark my wildness and independence. And I did what every other person on earth does, to show how independent they are – I went to a shop where a biker with a needle put some permanent ink in my skin.

I like my tattoo -it is a reminder of a specific place and time in my life. And it is semi-permanent – apparently you can burn them off with laser treatment which hurts more than the act of installing it in the first place.  It is not on public display, it is only visible when I make the choice to expose it. If I had the choice again, I wouldn’t have got it.

I am glad it is discreet. Because these days I can pretend that I am a true rebel and an outcast –  by nor having any body art.

I am not saying that I don’t find certain tattoos striking or attractive, because occasionally they are. It’s just now it’s almost at the stage where, unless you have a facial tattoo, it’s barely noticeable any more. The tendency is not to even seen them. And those tattoo sleeves, designed to stand out only say ‘Boring, mainstream , dull, dull, dull’ to me.

Have I settled into sour middle-age?

Perhaps I sound like a grumpy old man when I shout internally, at people when they display their body art ‘You’ll regret that when you skin is sagging and wrinkled like a withered balloon, just mark my words.’

The true tattooed rebels these days seem to be the ones who do their own body art. A hand that has ‘L-O-V-E’ on the knuckles of one hand, and ‘H-A-T-E’ on the knuckles of the other. Or an amateur looking ‘Mother’ on the forearm, or a child’s name inked on a neck, is the next frontier in body art. Or a teardrop tattoo – as this apparently still indicates having spent time in jail.  These people remain outside the mainstream. True rebels in a sea of uniformly tasteful and artistic tattoos.

To my sleeved South American fellow traveller I only send best wishes – mainly for staying quiet each morning. When is comes to the body art I think ‘Close but no cigar.’

2 thoughts on “The riddle of the tattoo”